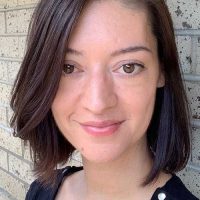 Maria Heater inherited her older brother’s collection of Goosebumps and hasn’t stopped reading since. As a daughter of U.S. diplomats, she grew up in West Africa, the Middle East, and South America, but now calls Colorado home. She started reading the slush pile for agents in 2016 and is now an assistant at an agency in Denver where she lives with her husband, baby, and cats. The only thing that rivals her TBR pile is the list of places she has yet to visit.

Claire Brennan [no need to bold character names in a query], the main character of TITLE [titles are best in caps, not bolded, highlighted, or underlined], my 106,000 word work of women’s fiction, believes that a degree from a posh women’s college is her ticket to avoiding her mother’s fate as a broke waitress who believes a man, or a cocktail, can solve life’s problems. [This first sentence is doing double duty with both the metadata and introducing the protagonist but it’s coming off verbose. 46 words is long for a sentence and I can’t read it aloud without running out of breath. Consider putting the metadata later in your query and just sticking to Claire in this first sentence.] But Claire doesn’t foresee that she is more likely to leave college in a prison jumpsuit than in a cap and gown when she is falsely accused of theft and then blackmailed into a bank robbery. [Lots of interesting things happening here. With the phrase, “But Claire doesn’t foresee,” this sentence pans way out and becomes omniscient. I think sticking close to Claire will be have more tension and urgency, for example: “But when she’s falsely accused of theft and blackmailed into a bank robbery, Claire fears she’ll leave college in a prison jumpsuit instead of a cap and gown.”]

Nor does she anticipate [more detached, omniscient language. If this story is from Claire’s perspective, we shouldn’t know anything she doesn’t know.] the impact of the Vietnam War on her life and the lives of those around her [This language is vague, best to use specifics in your query. How exactly will the war impact Claire and those around her?], especially her fellow outcasts and comrades-in-arms [does comrades-in-arms mean they were also involved in the bank robbery?] — Simone Williams, a girl with family ties to the Black Panthers who fears she’ll end up as chewing gum on the bottom of someone’s shoe if her people don’t overcome, and Abigail Gardner, a social reject despite being the child of American aristocracy, who longs for something – or somebody – to fill the void in her soul. [This paragraph is one sentence and over 80 words—that’s too long. I’m also a little confused by the appearance of the two friends. Is this a multi POV novel? If so, I’d suggest giving each POV character their own short paragraph. If not, stick to Claire. How is she being blackmailed if she didn’t actually steal anything? What does this mean for her future at the college and long term plans?]

These three friends believe they can change the world. [This sentence strongly suggests this is multi POV] The problem is, the world fights back. And sometimes the threat comes from those claiming to be the good guys. [Specificity is key in a query and there’s nothing concrete in the last three sentences. How are these three characters with their unique stories going to come together?] After the police murder Simone’s cousin and an anti-war bombing goes horribly awry, Claire decides she must choose herself over sisterhood, a decision that troubles her for fifty years, until she gets a second chance to make things right. [At this point I’m not quite sure what the story or hook is. Everything interesting from the first paragraph (the accusation, the robbery, college, Claire’s troubled relationship with her mother) is pretty much forgotten. How did we get from that robbery to the bombing and murder? What’s at stake? How the events lead into one another is the story, without that, it’s just a series of happenings. When is the bulk of the story taking place, during the war or 50 years later when Claire redeems herself?]

I am writing to you seeking representation for my novel because of [Agent Personalization.] TITLE evokes the “band of sisters” motif and intrigue of works like The Alice Network and The Lost Girls of Paris as well as the zeitgeist of Mrs. Everything.[This is a good paragraph to put your metadata, perhaps in the second sentence: “TITLE is a 106,000 word Women’s Fiction novel that evokes…”]

TITLE draws on my experience attending a Seven Sisters college where I earned a degree in English and an education in how the one percent lives. [I’m not sure “percent” needs to be italicized. I assume you mention this experience because it relates to Claire’s time at college but we hardly got any of that from the query.] I began writing creatively after [I’d recommend starting with, “I’ve had an award-winning…”]an award-winning career as a professional communicator on the front lines of progressive politics and social justice in roles such as statewide manager for California’s pro-gay marriage campaign and public affairs director for the San Diego ACLU. I have an outstanding record of accepted opinion pieces with major newspapers, including the San Francisco Chronicle and the San Diego Union-Tribune.

An excerpt from TITLE will soon appear in A Year in Ink, a competitive anthology published by San Diego Writers Ink. The novel has been work-shopped through a weekly read and critique group led by an award-winning novelist. I have also taken several online novel writing courses. [I’d suggest keeping all your writing experience together, i.e. “My writing has appeared in Newspaper 1 and Newspaper 2 and an excerpt from TITLE will be published…” rather than separating them into different paragraphs.]

Thank you for your consideration. Here are the materials you requested. I look forward to hearing from you. [Agents assume you’ve followed directions and are eager for a response so I’d cut the last two sentences here.]

It wasn’t until one of the tellers saw the guns and screamed like a squirrel gripped in a hawk’s talons that I realized my future was far more likely to feature a prison jumpsuit than a cap and gown. [There’s a fair bit of abstraction in this sentence (the simile about the squirrel and the thoughts about her cap and gown) that’s keeping it from having the immediacy I’d expect in such a high-octane moment. Consider tightening to something like, “When the bank teller screamed, I realized my future…”]   Up until that point, I had convinced myself it was all just guerrilla theater. Then Paul shot out the security cameras and shouted[,] “Up against the wall, motherfuckers!” – stealing the anthem the Yippies had stolen from the cops.

“What the hell?” I cried. “You said the guns wouldn’t be loaded!” [To me this seems more like a moment where she’d realize it’s not theatre, rather than the bank teller screaming.]

“This is a stick up!” Ben yelled, ominously [I don’t think you need this adjective since we can easily imagine how threatening this is] waving his own rifle. Sweet Ben, who usually looked more like a graduate student than an anti-war radical with his neat ponytail and granny glasses, sprayed the ceiling with bullets. [This description threw me. He’s “sweet” but he’s part of a group blackmailing her and forcing her to participate in this robbery? Maybe “soft-spoken” would juxtapose this without getting into her feelings about him when there’s already so much going on. Also, are graduate student and anti-war radical antithetical in terms of appearance? I think leaving out these comparisons might strengthen this description, i.e. “Soft-spoken Ben, with his neat ponytail and granny glasses, sprayed the ceiling with bullets.” This way the reader gets the contrast of his demeanor/appearance with his current actions, without getting sidetracked trying to imagine what a graduate student looks like versus a radical. I’d also rethink the word “usually.” It weakens the description since it just makes me wonder what he looks like on days that he doesn’t look like a grad student.]

Splintered cornice tumbled in chunks to the floor. My eyes burned and I hacked asthmatically [I’m not a fan of this adjective, it feels a little in the way. Maybe: “I hacked at the sulfur of gunfire and dust of pulverized plaster choking the air.”] as the sulfur of gunfire and dust of pulverized plaster choked the air. Secretaries in sheath dresses, probably there on their lunch hours only because they had to do their boss’s banking, screamed now, too. Elderly people peered around in nearsighted confusion and young mothers tried to gather their ducklings under their wings. A middle-aged man in a dark blue suit and horn-rimmed glasses jumped up from his desk in a small glassed-in office off the lobby. [Good job capturing the chaos around them. I think overall you’ve set the scene well, there are just some opportunities to streamline the writing and sharpen the descriptions. An intriguing opening scene!]

Thank you, Maria, for the critique! We are showcasing three mentor critiques each day leading up to the Pitch Wars 2020 submission window, so make sure to read the other two critiques for today and come back tomorrow for more.