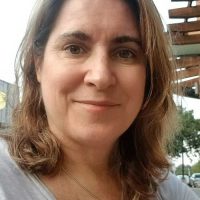 Mary Ann Marlowe is a central Virginia-based contemporary romance writer. She works with computers by day and plays video games by night. Theoretically, she loves to travel, but until she finds a patron to fund her trips around the world, she placates her wanderlust by letting her characters hop on a plane and hang out in Paris. Mary Ann also writes under the name Lorelei Parker. 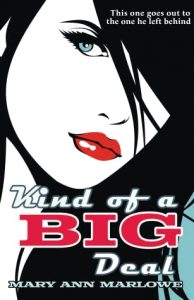 This one goes out to the one he left behind . . .
Guitarist Noah Kennedy is in a foul mood. He once stood at the proverbial crossroads and sold his soul for a successful rock career, but the sacrifice proved too great: Chasing his dream cost him the love of his life. Now he wants a do-over.

Museum curator Lucy Griffin has always loved Noah, but she has no use for a vagabond musician, not even one as intoxicating as Noah Kennedy. The last time she let Noah seduce her, the tour bus rolled out of town before Lucy discovered she was pregnant. Not that he ever knew. Having grown up with an absentee dad herself, Lucy shut Noah out of her life, vowing to protect her child from the heartache and empty promises of a fly-by-night father.

Now Noah’s back, tempting Lucy with everything she’s ever wanted—his time, his attention, his presence. Reuniting with Noah would mean revealing their child, risking his fury, and destabilizing the safe world Lucy’s created. But if she can’t trust Noah with her secret, she’ll lose her one chance to build the stable family she’s always wanted.

Within young love’s fumbling arena, our unnamed narrator [Without getting into questions of why the narrator doesn’t have a name, is there a more characteristic way you could establish this person to give us an idea who he is? You mention below he learns he wants to be a book cover designer. What is his current career? Could you maybe use this to add more detail? Or something to color in something unique to define him.] strays down a peculiar path. Led by Christine, he’s invited [Could you phrase this to be less passive? Christine, <some information about who she is>, invites him …] to take pleasure with her body in near-unlimited ways…. And, in return, all she requires is the fulfillment of her darkest wish, her deepest desire. For her arousal, for her sexual satisfaction, Christine needs to act like — to become — a kitten. [Is there anything at risk for the narrator? For Christine?]

More than a book about fetishistic acts, this story is one of self-discovery. For Christine, it is a tale of becoming acquainted with her inner cat. Of finding acceptance. Of feeling fulfillment. [This is all telling. Try to avoid making broad statements about the book’s themes or generalize what the book is about. Stick to showing us who the characters are, what they want, and what will happen if they fail to get it (the stakes).] For our narrator, their relationship’s pet play unlocks his own desires. And, for the first time in his life, he knows what he wants: to become a book cover designer. [There seems to be a logical leap in here. Establish more above about this character so there’s a connection to this goal.] [I’m looking for some stakes in here. We know what Christine wants and what the narrator eventually discovers he wants, but what’s at risk to either?]

Graceful Giselle paraded the stage, her scintillating ballet observed by hardly a soul. [This (“hardly a soul”) is a nice detail that summons to mind the emptiness of the club, and I can infer from this it’s an off hour or else the club isn’t very popular.] As the music approached climax, she arched her lithe body backwards and spun into her finale. Pivoting on a high heel, one limber leg locked around the pole, this was the ultimate moment. Her soft underbelly exposed, her uncovered groin visible. With zombie-like fixation [nice image], the trio of regulars leered at the glancing access. But it was over. She collapsed in a split, a rain of dollars pleading for more.

“Gentlemen, um, let’s hear it for Giselle,” my voice resonated from the speakers. “Want this, uh— this stripper on your zipper?[I like the voice here]” I sighed, defeated by the pre-written cards[and here]. “Then make sure you, um, you get a private dance. All it takes is seventy-five dollars and a dream.”

Striding off the stage, Giselle swooped up her silk robe, resting it in the crook of her arm. Confident and naked, she brimmed with the full pertness of her twenty years. Gliding behind her seated audience, each patron’s shoulder received the barest single-finger caress. Far from a thoughtless gesture, this was a skillful summoning [Nice detail showing her manipulation].

One man swayed, contemplating the cost, his momentary indecision allowing another to pounce. A wad of green in hand, the grizzled victor shuffled after his pleasurable promise.[I enjoy the writing in this sample and the bits of voice. I also appreciate how polished it is grammatically. My only concern is that, assuming Giselle is *not* a stage name for Christine, that there’s a lot of time on a side character dancing and teasing. If this *is* a stage name for Christine (hard to tell in a sample), then this is a good use of real estate. Overall, this sample shows off your writing skill, but it could be hookier.]

Thank you, Mary Ann, for the critique! We are showcasing three mentor critiques each day leading up to the Pitch Wars 2020 submission window, so make sure to read the other two critiques for today and come back tomorrow for more.