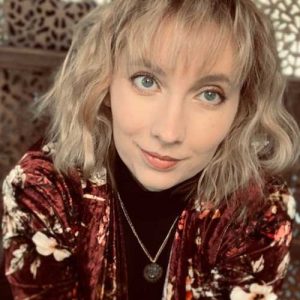 Margie Fuston grew up in the woods of California where she made up fantasy worlds that always involved unicorns. She’s still in the woods, but now she spends all her time wrangling a herd of cats and helping her nephews hunt ghosts, pond monsters, and mermaids. Her debut novel, VAMPIRES, HEARTS, AND OTHER DEAD THINGS, comes out in 2021 with Simon & Schuster/McElderry.

When science and faith fail her terminally ill father, Victoria heads to New Orleans in search of a vampire to save him. She meets a mysterious young man who might be what she’s looking for, only he won’t share the secret to immortality with just anybody. Publication is planned for summer 2021.

Seventeen-year-old Hannelore prefers not to draw attention to herself; after all, standing out is what got her mother burned at the stake. [This definitely piqued my interest. I’d love to see something more specific about Hannelore in the opening line as well—just a small character detail to make her come alive a bit more. For example, is there something she loves but avoids doing because she doesn’t want to draw attention to herself?] But when her father goes missing, [What does she think happened to him? What’s her fear?] Lore is determined to bring him home. The Black Forest is full of dangers, [What kind of danger? How does she know he’s in the Black Forest?] but she knows the devastation of losing a parent, and she will do whatever it takes to save him. [You say both “she’ll do whatever it takes to save him” and “Lore is determined to bring him home.” These capture the same idea, so we don’t need both. I prefer “she’ll do whatever it takes” because it feels more desperate.]

When a sudden storm interrupts her search, Lore stumbles into the lair of the band of lycanthropic brigands who are holding her father captive. She exchanges her freedom for his, [Why did they have him in the first place and why would they trade for her?] and he reveals the truth: her mother was a witch, and she is, too. [Why is he revealing the truth in this moment?] Lore strikes a bargain with the wolves: if she can use her magic to lift their curse, she will be free to leave. [Does she strike this bargain after or before they make the trade for her? That makes sense if she promises this before they make the trade, but it’s not clear yet.] Lore doesn’t expect to find herself feeling more at home among the monsters than she ever did in her village [What exactly makes her feel at home there?], or the surge of confusing feelings for Finch, the mysteriously scarred young werewolf who captured her [She was captured? Earlier it says she stumbled into them. If she was captured then they have the power—why trade for the father if they already have both?], or for Anna, his ex-betrothed and Lore’s closest ally. [Interesting dynamic. I’d love another line about how Anna has been an ally.]

As Lore uncovers more about her magic, her mother’s secrets, and her true self, she learns that the wolves aren’t the only threat lurking in the forest: far more dangerous are the monsters who wear the faces of men. When disaster strikes, Lore realizes that there is only one way to keep her word to the wolves…and in order to pull it off, she will have to place herself directly on the pyre. [There’s a lot of intriguing bits here, but this paragraph feels a bit rushed and vague. I’d recommend spending more time fleshing this out and less time on the father being missing since that doesn’t seem to be the main conflict in the book, but it does take up a significant part of the query.]

TITLE is a YA Historical Fantasy inspired by Beauty and the Beast and set in early modern Germany, and will appeal to fans of SERPENT & DOVE, UPROOTED, and GIRL, SERPENT, THORN. It is complete at 85,000 words, and stands alone with series potential. [Love the comps! This is already super intriguing, and I hope these notes help!]

They burned my mother for a witch.

They said she cursed our village. That she was to blame for the soldiers, who brought with them war that burnt our fields and caused bellies to go hungry every night. That she was to blame for the sickness that swept through the children, claiming at least one from every family except our own. That she made a pact with the Devil in order to save me, and in doing so, damned herself. [Your first line intrigues me, but this line about the pact with the Devil is the one that really pulls me in. It’s more unique, and it gives me a sense of the mother/daughter bond, and it raises a question: why would her mom need to make pact to save her? What happened? (I’d hold off on revealing it was to protect her against sickness and add another thing she was accused of instead.) I’d actually recommend reworking this to make this the first line, followed by all the other things she’d been accused of and then hit us with the fact that she was burned.]

“Hannelore.” My stepmother’s gentle voice pulled my gaze from the Martinstor [I’d love to see some more description of the setting here.] and the memories of flames and screams. I took my youngest half-sister, red faced and fussing, from her outstretched arms. Lina snuggled immediately into me, tucking her head under my chin, and I breathed in her sweet baby scent to banish the phantom smoke from my nose. [I love this line.]

My other two half-sisters, seven year-old Liesl and five-year-old Lilli, raced ahead of us in the steady gray drizzle, all blonde curls and swirling skirts on their way to the Münsterplatz. [This would be another spot to add more setting. It doesn’t need to be a lot—an added detail about where the sisters are running.] I thought for a moment that I should follow them to make sure they stayed out of trouble, but the worried look on Britta’s face kept my feet still. [I imagined she was already walking because of the phrase “raced ahead of us” above.]

“What is it?” I asked. My gaze dropped to the slip of paper she held clenched in her hand. “Word from Papa?” [Great spot to add some interiority. Has her father been gone long? Does she miss him? Are they close?]

She shook her head. “It’s nothing. The storms make it difficult to travel, that’s all.” She gave me a forced smile and tucked the letter into her pocket. [This is certainly a solid opening that makes me want to keep reading. Well done!

Thank you, Margie, for the critique! We are showcasing three mentor critiques each day leading up to the Pitch Wars 2020 submission window, so make sure to read the other two critiques for today and come back tomorrow for more.