HOW TO DISCIPLINE YOUR VAMPIRE by Mina Vaughn … eBooks & critiques giveaway, excerpt, and trailer reveal!

I’m so excited to have HOW TO DISCIPLINE YOUR VAMPIRE by Mina Vaughn on my blog today. Mina is a slush reader in Pitch Madness and a mentor in Pitch Wars. She’s always giving back to the writing community so what better time to spotlight her book than around Pitch Madness. This book is AWESOME! After you read about it sign up on the Rafflecopter below for a chance to win one of three eBooks, a query critique from agent Jessica Sinsheimer with Sarah Jane Freymann Literary Agency, a query and first chapter (15 pages max) from Mina, and a query and first chapter (15 pages max) critique from me.

So here’s all the great details about this wonderful novel …

How To Discipline Your Vampire
By Mina Vaughn 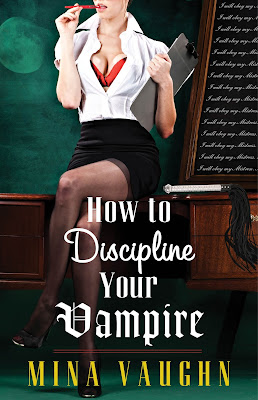 Summary:
Cerise Norrel, Type A substitute teacher by day, is ready to quit being a domme. Despite her best intentions, none of her partners can keep up with her scene fetish and attention to detail—let alone her demand that they have a costume and set waiting every afternoon by the time she’s home from school.

Over a dozen potential subs have left her in the past year, but just when Cerise thinks it’s impossible—that she’ll have to go back to vanilla relationships, or be alone forever–she meets William, who wants to make all her fantasies come true. He turns her home into a geisha’s dream apartment, a concert hall with a grand piano (which he uses to play an original composition while wearing a tuxedo), and even rents an abandoned loft for a zombie apocalypse scene—complete with canned goods.

But there’s something strange about William. Well, a lot of strange things. He must be absurdly rich, since he can afford to provide extravagant costumes and props on a daily basis without having to
leave work early. He must be insane, since he puts up with Cerise’s over-the-top demands. And most importantly, he doesn’t redden when he’s spanked, and his skin is as cool as satin sheets. When Cerise
discovers she’s become domme to the infamous “Chilly Willy,” as he’s known throughout BDSM  urban lore, she begins to find out there’s a whole lot more to her handsome submissive than a creative mind and a hard body.

And when it’s William, ironically, who starts pressing Cerise to give him the kind of commitment she’s never given anyone, it’ll take everything she has to work through her issues, confront her past, and learn to be vulnerable.

Buy it now on Amazon: http://amzn.to/1brX1bT

Or add it to your Goodreads http://www.goodreads.com/book/show/17571282-how-to-discipline-your-vampire


Enter the Rafflecopter for a chance to win one of the great prizes for HOW TO DISCIPLINE YOUR VAMPIRE giveaway now!