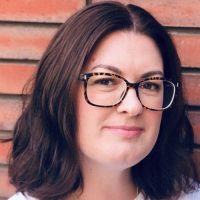 Falon Ballard loves to write about love! She also has an undying affection for exclamation points and isn’t ashamed to admit it! When she’s not writing fictional love stories, she’s helping real life couples celebrate, working as a wedding planner in Southern California. She has a deep appreciation for the Marvel Cinematic Universe, is a Disneyland devotee, and is a reality TV aficionado. If she’s not busy wrangling her seven year old, you can probably find her drinking wine and posting a pic on Instagram, while simultaneously snarking on Twitter, because multi-tasking! 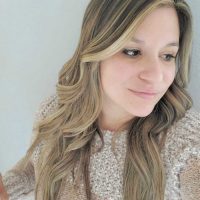 Brooke Abrams writes stories about women in their thirties that don’t have everything quite figured out yet. She’s a former Pitch Wars Mentee (class of 19) and a recovering parenting blogger. Brooke holds a Masters of Early Childhood Education and has spent the last 8 years as a school administrator working with young children and parents.
When she’s not writing, Brooke spends her time with her three children, husband, four rescue pets, and fifty-ish houseplants. If she’s not at home, then she’s most likely attending a local drag show or devouring a plate of Sonoran Mexican food in her adopted hometown of Tucson, Arizona. 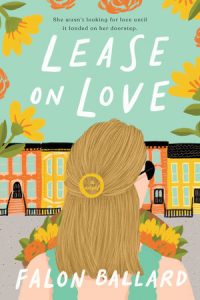 Beach Read meets The Flatshare in this warmly funny and delightfully sharp debut rom-com about a down-on-her-luck young woman who turns an innocent mix-up between a dating app and a roommate app into a new chance at love.She wasn’t looking for love until it landed on her doorstep.After getting passed over for an overdue—and much-needed—promotion, Sadie Green is in desperate need of three things: a stiff drink, a new place to live, and a one-night stand. When one drink turns into one too many, Sadie mixes up a long-ignored dating app for a roommate-finding app and finds herself on the doorstep of Jack Thomas’s gorgeous Brooklyn brownstone. Too bad she’s more attracted to his impressive real estate than she is to the man himself.

Jack, still grieving the unexpected death of his parents, has learned to find comfort in video games and movie marathons instead of friends. So while he doesn’t know just what to make of the vivaciously verbose Sadie, he’s willing to offer her his spare bedroom while she gets back on her feet. And with the rent unbeatably low, Sadie can finally pursue her floristry side hustle full-time. The two are polar opposites, but as Sadie’s presence begins to turn the brownstone into a home, they both start to realize they may have just made the deal of a lifetime.

Beneath a full moon in 15th century Ukraine, Oleksandra raises from a shallow grave with a single-minded focus: to kill the man who killed her. [this is a great hook] Reborn as a strzyga, a demon with a thirst for blood and vengeance, she fumbles through her first kill only to find revenge brings no relief from the hunger that consumes her. She bands together with a Legion of strzyga to gain control but finds herself falling ever deeper into the destructive rage that fuels their power. When her twin brother, Dmitry—who abandoned her seven years ago—arrives at the Legion determined to rescue her from her demonic fate, she must choose whether to give herself entirely to her new nature or fight her way back to the compassionate healer she once was. [There’s a lot of info in this paragraph. Your first page shows a writing style that is quick and punchy, and I think your query should show the same. Cut any info that isn’t essential and condense the rest. For example: Reborn as a vengeance demon, she bands together with the Legion, only to find herself falling deeper into their pit of destructive rage.]

But Dmitry is struggling under his own fate. [Is Dmitry a POV character? If not, you can skip this paragraph.] “Only one can emerge,” spoke the wise woman, and though he entered with the intent to ignore that prophesy and bring Oleksandra home, he finds her changed beyond measure. Worse still, being enslaved to the Legion has forced him to confront the shadows that plague him. Each night as Oleksandra torments him, the same questions run through his mind. Is she still worthy of saving? Or is death the only relief from what she has become? [Same as the above paragraph, cut any info that isn’t essential. Also, rather than leaving off on a question, turn it into an action statement: Dmitry must decide if his sister is worth saving.]

TITLE is a dark historical fantasy written for an adult audience. Inspired by the folktale Oh, Lord of the Forest, it is complete at 100,000 words and will appeal to fans of THE WOLF AND THE WOODSMAN by Ava Reid and THE BEAR AND THE NIGHTINGALE by Katherine Arden. [Great comps!] A standalone novel, it is also the first in a planned episodic series using Ukrainian folklore to explore the power and depth of the female psyche.

I am a Canadian of Ukrainian descent and have long been fascinated with the way my ancestors used folklore as a quiet resistance against cultural erasure. I am an active member of the Writers Guild of Alberta and enjoy attending their annual conference. I am the winner of the 2019 FBCW Flash Fiction award and have been published in WordWorks magazine.

Thank you for your consideration. [Overall, the premise is intriguing, but I’m not entirely clear on the details. Boil it down to who is the character + what do they want + what happens if they don’t get it.]

The man who killed Oleksandra could not possibly have known she was a strzyga, elsewise he would have removed her head and buried it between her knees. As it stands, he did not, and so when the full moon exposed the thin film of dirt he had used to cover her body, she rose and shook off her bed [blanket] of leaves.

As the filth and the dirt fell away, the rage seeped in. She did not understand how she had risen [something to think about: from the opening lines, it makes it seem like Oleksandra knows what she is, but the man who killed her doesn’t—maybe switch it up so the opening is more like when Oleksandra’s eyes went dark for the last time, she never expected to be reawakened again], but she certainly knew what she was going to do with herself now that she had awakened.

Judging by the stars, it had been perhaps two weeks since Boryslav’s thick, calloused fingers had wrapped around her throat and stoppered up the air. Two weeks that she had been fermenting in the darkness, having each memory of that final hour of her life stripped away and replaced with a thread of anger here and a wash of hunger there.

And oh, what hunger. She hungered in a way that a life of serfdom could never have prepared her for. It made her very bones tremble with need. They were empty, hollow, like a carafe yearning to be filled, and there was only one way to fill it.

She turned her gaze toward the village and began to walk.

The night was crisp and chill, and the breeze slipped between her thighs and brushed the hair from the nape of her neck, but she did not pause to pull her tattered clothing around her.

[You’ve got some great sensory details here, but as a reader, I want some clarification. Does she know she’s a demon? Is she wakening up with totally new sensations? How is this hunger different from hunger she’s felt in the past? If she doesn’t know she’s a demon, I want to see all her emotions/feelings as she wakes up—I want to see her brain trying to process what’s going on.]

Thank you, Falon and Brooke, for the critique! We are showcasing three mentor critiques each day leading up to the Pitch Wars 2021 submission window, so make sure to read the other two critiques for today and come back tomorrow for more.