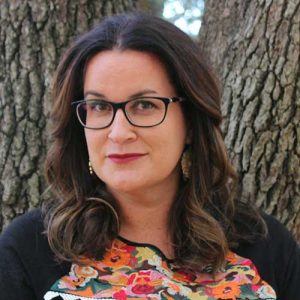 Adrianna Cuevas is a first-generation Cuban-American originally from Miami, Florida. A former Spanish and ESOL teacher, Adrianna currently resides in Austin, Texas with her husband and son. When not working with TOEFL students, wrangling multiple pets including an axolotl, and practicing fencing with her son, she is writing her next middle grade novel. 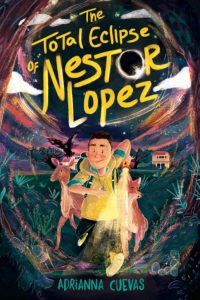 In this magical middle-grade debut novel from Adrianna Cuevas, The Total Eclipse of Nestor Lopez, a Cuban American boy must use his secret ability to communicate with animals to save the inhabitants of his town when they are threatened by a tule vieja, a witch that transforms into animals.

All Nestor Lopez wants is to live in one place for more than a few months and have dinner with his dad.

When he and his mother move to a new town to live with his grandmother after his dad’s latest deployment, Nestor plans to lay low. He definitely doesn’t want to anyone find out his deepest secret: that he can talk to animals.

But when the animals in his new town start disappearing, Nestor’s grandmother becomes the prime suspect after she is spotted in the woods where they were last seen. As Nestor investigates the source of the disappearances, he learns that they are being seized by a tule vieja―a witch who can absorb an animal’s powers by biting it during a solar eclipse. And the next eclipse is just around the corner…

Now it’s up to Nestor’s extraordinary ability and his new friends to catch the tule vieja―and save a place he might just call home.

TITLE, a MG Fantasy complete at 75K words [This trends a little high for MG, even fantasy, so be aware that you might have to edit this down.], won the 2020 Tassy Walden Award for New Voices in Children’s Literature – MG category. Readers who enjoyed Holly Black’s and Cassandra Clare’s Magisterium Series and Marcy Kate Connolly’s Monstrous [Good use of current comps] would enjoy Sydney’s story. [I would move this paragraph below your two paragraphs describing your story. You want to hook agents right away with the premise of your book. The nuts-and-bolts information can wait until later.]

When Sydney Parks, an eleven-year-old girl raised in the Inventor’s world, isn’t elbow-deep in dirt on her rooftop garden, she’s lounging on a tree limb reading The Annuals’ Short Life or Soil Has Soul. But her flower friends are no substitute for what Syd yearns for most: family and a place she fits in—somewhere her peers won’t vote her most likely to marry Mr. Potato Head. So, when Sydney is tossed like a trapeze artist through the Root Route and lands in Renala, a cloaked island in the Bermuda Triangle where Flares live, people like her, who can magically manipulate the elements—she can’t believe it. Holy Gladiolus! Sydney’s found her place. [This first paragraph sets up well who Sydney is, what she wants, and the event that starts her adventure. There’s a little extraneous information that makes it longer than necessary- book titles, ‘tossed like a trapeze artist’, holy gladiolus- but it’s not so distracting as to lessen the effectiveness of the paragraph.]

The island, created by the Founding Four, relies on the Bayab Tree to breathe magic into the air in order to stay afloat. But the tree’s roots are shriveling and the magic-elixir it imbibes is drying up. Sydney’s determined to find a way to help. [Good explanation of the problem in the story and what the main character needs to do.] She learns she is one of four Readers. As Earth Reader, Sydney can read stories of Renala’s past on the pulp pages of The Book of Then, pages that are blank to all but Sydney. She joins the Wind Reader, who spins threads of windy-words spoken in the present—the Water Reader who sees the future in her Cup-of-Reflection—and the Fire Reader who reads the right path in the flames. Sydney, along with her newfound friends, travel the island’s tunnels, treetops, mountains and shores as they work to unlock the history and mystery of Renala’s magic to save the Bayab Tree. Meanwhile, Darca and his Scar Army are secretly siphoning the elixir and hording the magic for themselves. They are equally determined to stop Sydney and the other Readers from foiling their plan to kill the Bayab Tree, sink the island, and make off to the Inventor’s world to dominate the planet. [You’ve set up the stakes well. I don’t think you need to explain the powers of each Reader except Sydney since that makes this paragraph a little too long and detracts from the plot points you’re mentioning.]

My love of trees and the magic of nature is what inspired me to write this story. I have been a member of SCBWI for more than ten years and am an active participate in many SCBWI critique groups. As a writer of MG and YA, I am dedicated to continuing my growth in the craft of writing. I am seeking representation and would love the opportunity to work with you, a strong editorial agent. [Unless you are only planning on querying agents who have billed themselves as ‘editorial,’ I would leave this out since not all agents provide this.]

I look forward to hearing from you.

Sydney knelt on her bed and flung open her window. The birds in the bushes outside of her ground floor apartment chirped angrily and flew off.  She hung out of her window and tilted her head up toward her rooftop garden seven flights above. The Scarlet Rose Mallow only opened its petals for one day. ONE day! Sydney did not want to miss the opening. She stuck out her tongue. She cocked her head. Searching for the telltale vibrations [This hints at a special ability of Sydney’s and I wanted to see a little bit more of this in the first page just to clue the reader in to the world you’ve create and how this shapes Sydney.] in the air that would mean that today would be the day—Scarlet’s Opening Day. [Good job setting up a goal for Sydney right away that also clues the reader in to who she is as well.]

“Good morning, Buttercup!” a voice said. Uncle Mo faced her, his head stuck out of his own window from the room next to hers. His full head of red hair sprang out in all directions. The coils bounced in a constant state of movement, just like the rest of him. [Excellent job creating a vivid character. I can definitely picture him.]

“I’m listening for Scarlet,” Syd told him. She had been so sure yesterday would be Scarlet’s Opening . . . but nope. Sydney didn’t want to rush up to the garden again, only to be disappointed.

“Oh right, right.” Uncle beamed, the wrinkles that had just started to show creased around the corners of his eyes.  “Remind me, what day is today?”

“Uhhh.” She had to think. Today was so, SO many things. It was June fourteenth, for one. It was the last day of school. Last day of sixth grade. The forever-end, for Sydney, at Goodwin School. If there was one thing Sydney hated—it was endings. And beginnings. And change.

Well, except for the change in seasons. Those she loved. Especially winter to spring. Nearly every day was an Opening Day [You may go on to explain this, but initially seeing this term didn’t make me think of flowers. I thought of baseball. You give a lot of information in this paragraph and the previous one, which is good because it shows the reader who Sydney is, but at the same time, the jump from Sydney talking about June 14 and all it means to now talking about seasons is a little too much. Of course, it depends on how you continued things after this sentence but I’m inclined to think a beat between these two sentences- Sydney says something to her uncle or does something- may help.] in spring.

Overall, I liked this. The writing is vivid. I can picture the characters and setting. It’s clear right away what the main character wants. The only thing I’d like to be shown a little more of in this initial scene is the special ability that Sydney has. This would ground the reader in the world you’ve created and help them understand how Sydney fits into it.

Thank you, (MENTOR(S)’ NAME HERE), for the critique! We are showcasing three mentor critiques each day leading up to the Pitch Wars 2020 submission window, so make sure to read the other two critiques for today and come back tomorrow for more.