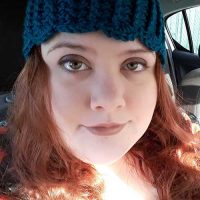 Anna Kaling writes mostly British contemporary romances featuring lots of tea, rain, and passive-aggressive queuing. By day she writes about concrete erections for a construction firm, and by night she… well, never mind. She’s working towards being an old cat lady and is a big fan of sharks, bad horror movies, and the Loch Ness Monster. 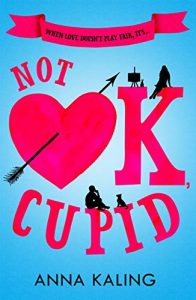 Ally Rivers has three jobs, a disastrous dating record, and her gran won’t stop talking about sex with eighty-year-old Melvin. Now her best friend Sam confesses his whole family think they’re engaged. The longest relationship she’s ever been in is fabricated, and her intended is gay.

Playing Sam’s besotted lover at a family party, Ally discovers the hot gardener she’s been flirting with is Sam’s dad, Marcus. She even sucks at fake relationships. But Marcus is on to them and embroils Ally in another scheme – encouraging Sam to come out.

Scheming is not Ally’s forte and, worse, she and Marcus are falling for each other. After years in an unhappy marriage, he’s not letting Ally go without a fight, but she’s torn between the best friend she’ll ever have and the only man she’s ever been in love with. Either choice will leave two broken hearts, and Gran will still have a more successful love life than her…

I am seeking representation for my debut novel, TITLE, a contemporary romance of 81,000 words. Similar to Emily Henry’s BEACH READ and Linda Holmes’s EVVIE DRAKE STARTS OVER, FULL CIRCLE captures the complex coexistence of grief and joy after a devastating loss.

In the wake of her father’s sudden death, Josephine “Jo” Wyatt returns to her hometown, Orange Beach, Alabama and the beloved Sun Circle Resort where she was raised. Thinking she’d [she’ll – present tense] be in town for only a few days, Jo’s plans change when she discovers that her father not only owned but has left her the resort he managed. Desperate for help as she grapples with her unwanted inheritance, Jo accepts the legal assistance of her ex-boyfriend, Noah James, despite their complicated and painful history. [I recommend a  short explanation of why she accepts Noah’s help rather than finding a lawyer she doesn’t have bad blood with. Just something like, “Short on funds, Jo accepts the legal assistance…” Otherwise her decision seems illogical.] [I would add a paragraph break here; chunks of text are more reader-friendly than long paragraphs.] Though Jo’s resignation [Is resignation the right word? It sounds like you mean determination rather than a passive acceptance.] to keep Noah at an arm’s length falters the more time she spends with him, she still struggles to forgive his betrayal from years ago. As Noah attempts to tell her the truth about what happened, [Could you use a stronger phrase here? ‘Attempts’ sounds a little passive. I want to see Noah fighting for her. I also think it would be more intriguing if you told us what Noah is supposed to have done; I know it sounds paradoxical, but precision is usually more intriguing than vagueness in queries. Give us a clear picture of the hurdle Noah has to overcome to win Jo back. It’s okay if it’s something really bad, because it’s clear he isn’t guilty – or at least that Jo doesn’t have the full story.] Jo wrestles with the undeniable pull she feels toward him and her need to protect herself from being hurt again. Weaving together her past and present, TITLE tells Jo’s story of grief, love, and coming home to the most important people in her life—Noah, her hometown family, and most importantly, herself.

Like Jo Wyatt, I was raised by a single father and grew up on the property that once housed Sun Circle Resort in Orange Beach, Alabama. I have a Bachelor’s degree in English Writing from Mississippi College as well as a Master’s in English from the University of Alabama at Birmingham. I now live in Birmingham, Alabama where I work for an education grant and teach English Composition at the University of Alabama at Birmingham. I write in my free time. Thank you for taking the time to consider my work. Please let me know if you have any questions. I have included the requested materials below.

[Good job! The query is concise, explains your premise well, and shows accomplished writing. It’s not easy to condense 81k words into a few paragraphs, and you’ve done that really well. I would be confident that your manuscript is also well-written and structured, even without the bio (which makes me even more confident in your skill).

There are three areas that stick out to me:

BEACH READ and EVVIE DRAKE STARTS OVER, on the other hand, both include elements of humour. If you re-read their blurbs you’ll see they use playful language that hints at humour (E.g. “Everyone will finish a book and no one will fall in love. Really.” – BEACH READ) while also telling us that the protagonists are dealing with heartbreak and loss. Queries, like blurbs, should reflect the tone of the manuscript underneath.

If there is humour or a light-hearted side to TITLE, I recommend you include some playfulness in your query – even if the overall tone is still serious. If the manuscript is on the grittier side, then I suggest changing or removing the comp titles.

Looking at BEACH READ’s blurb again for an example, we can see Augustus and January have something in common (writing and writer’s block) but there’s also an opposites-attract thing going on. In EVVIE DRAKE, we can see that Evvie and Dean are both going through a tough time and burying the pain, so they’re able to lean on each other for support. What is it bringing Jo and Noah together again?

Perhaps it’s your setting that’s the ‘zing.’ It sounds like the Sun Circle Resort features strongly in your MS – what makes it an interesting setting? Or maybe it’s the nature of Noah’s betrayal that gives us the zing – did he do something particularly unusual or awful? Cheating on Jo probably isn’t zingy enough, but cheating on Jo with her sister? That could be a zing, because I’d be dying to see how he wins Jo back after THAT! Of course, you don’t want to make him unsympathetic, but as long as you hint in the query that he isn’t guilty (which you’ve done), you’re good.

I always find examples help, so back to your comps again. The zing in BEACH READ’s blurb, for me, is the fresh idea of the hero and heroine switching their literary outlooks. Who doesn’t want to see an acclaimed literary author squirm as he tries to write a romcom? I do! And in EVVIE DRAKE, the zing for me is that the two protagonists are dealing with very different but very serious struggles, and I really want to see how they forge a new relationship under those conditions.

It strikes me that TITLE could be summarised in much the same way I just did with EVVIE DRAKE, depending on what you tell me about Noah. I just need to see that zing in the query.

I’m looking out over the bay when a hand on my back causes me to jump, nearly sending the heel of my stiletto between two boards of the pier.

“I know,” I say, taking a deep breath. “Is my face puffy?” I’ve been crying since I arrived home, at Sun Circle, the resort my dad managed, an hour ago. I didn’t anticipate the tears until the funeral began, but that was naive. Of course there would be people here early, setting up, preparing the resort to say goodbye to its long time director, my dad, and of course they would want to talk to me. I came out to the pier to escape, to find a few moments of solace before being thrust into the wake of grief. [I think we can all relate to this feeling. Nice phrasing.]

Claire releases me from the hug and holds my face between her hands. “You look perfect, Jo,” she says before kissing my forehead. “Just like your mama. But I see so much of your dad in you, too.”

I offer her an attempt at a smile before stepping back.

“Thank you,” I reply, a genuine smile crossing my face at the mention of my mom. “I’m glad you’re here,” I tell her. [You don’t need the second dialogue tag (I tell her). It’s another little area where the writing could be tightened.]

“There’s nowhere else I’d be today,” Claire says to me. “William was like a brother to me.” She wipes a tear off her face.

[As I suspected from your query, your writing is accomplished and flows well. I’d recommend one more editing pass to look for redundant phrasing and see where you could tighten up, but that’s the only qualm I would have.

With one page it’s very difficult to tell, but I wonder if you’re started your story in the right place. This is a pretty static scene that seems designed to give us backstory – the reason for Jo being where she is. I wonder if it would be more engaging to start with Jo getting the bombshell that she now owns a resort? We wouldn’t need the backstory right there and then to appreciate what a hole Jo has landed in and watch how she deals with it.

But take that with a pinch of salt, since I’ve only read one page.

Well done and best of luck!]

Thank you, (MENTOR(S)’ NAME HERE), for the critique! We are showcasing three mentor critiques each day leading up to the Pitch Wars 2020 submission window, so make sure to read the other two critiques for today and come back tomorrow for more.