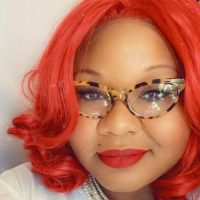 ST Sterlings is a queer writer of adult, young adult and middle grade fiction. Her favorite genres are contemporary, romance, horror, and fantasy. She has a bachelor’s and master’s degree in English as well as a master’s degree in Library and Information Science. In her free time, she likes to watch anime, horror movies, and a few select TV/Netflix shows. She also loves to read. Her favorite books are ones make her cheer, laugh, swoon, and/or scared. ST is originally from Virginia, but currently lives in Southern California. She is represented by Rachel Brooks of BookEnds Literary Agency.

It wasn’t the first time I had touched skin this cold. Was it too much to ask that this would be the last? [Great opening line! Keep in mind that when you’re sending your pages to agents, you want the text to be double-spaced.]

“Who the hell do you think you are? I told you not to go riding that stupid horse,” I muttered irritably. [The dialogue you have here is great, but the “I muttered irritably” briefly pulls my attention away. I think if you deleted it, it would read even better.] “You’re as useless a rider as you are a husband.”

I stared at the body of Filbert Egildag currently laid out on my father’s kitchen table. Correction. He had been a husband. Which after seven months of marriage and now at the ripe old age of nineteen, made me…[I’m not really following the bit after “Correction.” I feel like I understand what you’re trying to do. Maybe if you did something like, “Useless, but a husband nonetheless. Which after seven months…” Or something else. Right now, it’s stated that he was a useless husband, and then adds a correction that states he had been a husband—which isn’t really correcting anything.]

The shout was quite a ways from my father’s small hut. Hearing that stupid, unbecoming title, I continued scrubbing the dead man’s fingernails much harder than I should have for the third day in a row. Did they [Who is “they?” The villagers? Her neighbors?] expect me to weep for him? To tear my hair out overcome by grief? Of course they did. No husband, no children; [I suggest, adding something like, “to them it was a fate worse than death”, that makes it flow a little better into your next line.] it was a fate worse than death. But it had turned out to be a revelation. With him gone [This is implied and can be deleted (the “with him gone” part)], I thought I would get our hut to myself, able to live in peace [“Able to live in peace” is also implied and can be deleted]. Instead, Filbert’s moneygrubbing family had taken it over [“claimed” works just as well here] and village elders had helped cart me back to my father’s home [Why not show how frustrated she feels about the situation? For example, you could mention that she was forced to go back to her father’s home. Or even thrown or tossed. Obviously, those things probably didn’t literally happen, but it shows her irritation about the situation.] They had said [You’re getting passive here. I’d delete this and start the sentence with “It was unseemly…”] it was unseemly for a woman to be living by herself with no man around. Ridiculous! [If you show her frustration within the lines above, you wouldn’t need to include “Ridiculous!]

Pausing to reach past the measly, stale bread from dinner now on the stool nearby, I took the fig candy I had laid aside at the end of the table, stood and placed it in my late husband’s mouth. The sweetness of life to help you on your journey, I thought grouchily [I’m not following her thought process here. It seems she dislikes her late husband, but she’s not really demonstrating it. If she really dislikes him like you seem to be implying, why not jam the fig candy in his mouth? I also don’t really understand the “The sweetness of life to help you on your journey” line or why she would say it. If she’s resentful, show it. Don’t hold back!] staring at his pale, bloated face which in life had been filled with almost child-like animation, [I’d start the “So ecstatic” bit as a new sentence.] so ecstatic had he been to wed and bed me. As the village chief’s daughter, it had been my duty to set an example for our people as to what was right and proper. Finish growing breasts and hips, marry, and have children. [I don’t really follow the need to include this line or its significance.] I may have stood passively at the altar, but inside, I had been kicking and screaming [I like this, but I encourage you to show more than tell, maybe use a metaphor or simile, “like a wild beast brought to the slaughter” This sort of plays on the fact that her late husband was a butcher.] as Father married me to a man two years my senior and our village’s butcher.

He had been solid, but simple. And by simple, I meant idiotic. [I’d be careful here. You don’t want to offend anyone by implying that butchers are simpleminded. I know that’s not what you’re doing, but just be mindful. I’d add more to show how “simple” he was so that you don’t run the risk of confusion/offending]. The trade of butchering fat, muddy swine was a lucrative one, making him almost-[I’d lose the hyphen here.] wealthy in our quaint village. By my father’s standards, and that of the whole village, he was an excellent choice of spouse. Strong with his hands, a gentle spirit, and coins to spare. [While you can do this sometimes, you don’t want to overuse these types of sentences. I’d suggest restructuring it. “He was an excellent choice of spouse by my father’s standards…” to begin the sentence then continue on.] I could want for nothing…. except actual intelligent conversation and a husband that didn’t come home smelling like pig piss. [Again, be careful about this. You never know what profession someone has and this could be seen as a dig to butchers. You can still show her distaste for the job and her husband’s lack of enjoyable conversing skills. Give it some thought.]

Well, at least he had been as kind as Father said he would be. I had just begun to think I could make the best of the situation and even start to like him….until he died and left me in this mess. [Okay, now I’m lost. Did she dislike or did she like him? This seems out of place.]

“Widow Agatha! Are you home?” A pounding at the hut’s door.

I cringed at hearing it [I’d refer to what “it” (meaning the name) is just to avoid any confusion] again, stubbornly ignoring the call, no matter how true it was. Whoever was outside was asking if I was home. [This line isn’t really needed as the visitor asks if she is home. Maybe play around with the wording here. “Am I home? Staring at the sparse hut, I wondered…”] Staring at this sparse hut, I wondered what the hell was home? Cause [It seems that you’re losing consistency with Agatha’s voice. I imagine this to be sort of older, village-y type of voice, but then this seems more modern. All this to say that I recommend deleting “cause.”] This this certainly wasn’t it. Or at least it wasn’t mine. After Mother’s death and my sisters moving away, it had been just [This “just” can be deleted. It’s a crutch word and the sentence is find without it.] Father and me for so long. I loved him dearly, but sometimes even to him, I was a sack of grain. His daughter, quickly passed off to be Filbert’s wife, then widow. Next step was village spinster. [Again, I feel like her voice is inconsistent. Does she speak more olden times or is she more modern? I strongly suggest picking one and going on that throughout the book.]

The soft light from the fire caught the strings of a small harp in the corner [Lovely visual!], its paint chipped. My fingers twitched for a moment.

Thank you, ST, for the critique! We are showcasing three mentor critiques each day leading up to the Pitch Wars 2019 submission window, so make sure to read the other two critiques for today and come back tomorrow for more.