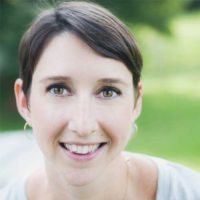 Susan Bishop Crispell earned a BFA in creative writing from the University of North Carolina at Wilmington. Born and raised in the mountains of Tennessee, she now lives twenty minutes from the beach in North Carolina with her husband and their literary-named cat. She is very fond of pie and is always on the lookout for hints of magic in the real world. She is the author of The Secret Ingredient of Wishes (Thomas Dunne Books, Sep 2016) and Dreaming in Chocolate (St. Martin’s Griffin, Feb 2018), which was selected as a SIBA Okra pick Winter 2018.

Sydney’s hometown friend and former team mate, Alex Townsend comes to her rescue when someone attacks her and her reputation from behind. [I’m not sure how this attack connects to Sydney’s new injury and wanting to compete one last time. Was her nasty spill not an accident? If so, you need to mention that in the first paragraph to drive that sense of suspense from the start. Also, can you be more specific about what kind of attack this is? Is she physically assaulted, was her equipment tampered with, or is it an online attack? Since you mention her reputation above, I’m not clear on what specifically is happening.] Even though he’s retired from competitive skiing, he finds comfort as a member of the ski patrol and finds the same chemistry they had together. He knows what she’s going through when he retired last year and acts as her sports sponsor to help her deal with the process. When Alex examines Sydney’s board and the Slopestyle course, he finds it suspicious and eerily similar to what happened to her in Sweden last year. He believes her “freak accident” was nothing but that. [This makes it sound like he does believe it was an accident. Do you mean he believes it was “anything but that”?] When things heat up on the icy slopes, his feelings for her grow stronger. As he solves this caper for her, he hopes there might be a future for them. [There’s a lot going on in this paragraph and I think you can pare it down to just the essentials to keep story tension high and moving forward. Something like: “Sydney turns to Alex Townsend, her former teammate and the ski patrol member who rescued her after the accident, for both comfort and advice. Having retired from competitive skiing the year before, he’s the perfect person to help her through the process. As their old feelings for each other reignite, Alex starts to suspect her accident was anything but, and he’ll do whatever it takes to keep her safe.]

Former rich boy and ex-snowboarder Jamie Sorenson had [has] plotted revenge against Sydney Chase for the past year. When she became the whistleblower on the “Operation Olympic Games scandal”, it unraveled like a ball of black yarn [If you move the first reference of the scandal above, you can tweak it here to avoid repetition. Also, instead of focusing on the scandal unraveling, say what it meant specifically for Jamie here instead of below. Something like “When she exposed Jamie’s role in the scandal—bribery, illegal drug use, forged checks, and cheating scores—he lost his sponsors, his place on the team, and his purpose.”]. Bribery, illegal drug use, forged checks, and cheating scores ran the gamut. [Per my earlier notes, this suspense angle seems to come too late in the query. If Sydney’s role as a whistleblower is a major driving force in the plot, I think it needs to be mentioned up front to show how the overall story of her injury and Alex’s part in investigating it all tie together.] Everything collapsed around him like a house of cards. [I would delete this sentence if you add something about what he’s lost above.] Now he’s working as a dishwasher in a nearby ski resort’s restaurant to help pay the rent and the bills as he makes his next moves on her. During a snowstorm, he wants a final showdown with her in a dead heat match to see who’s the best on the slopes and on the Superpipe. [I’m a little confused as to why he wants to race her. If he wants revenge, what does he hope to get out of the race? Or is he wanting to race her to kill her in another “accident”? If he is a POV character, you can get into his head a little more here to amp up the tension with his specific plans.] When it’s show time [Does “show time” refer to the Winter X Games or is this talking about her showdown with Jamie? If it’s the Jamie race, why does she agree to do it? I’m assuming if he is now a dishwasher, he’s not participating in the Games, right? Need to make it clear how this is all going down and why.], she has to put everything on the line to win the gold and to come out on top [What does coming out on top look like? I think you can be specific here to show what she’ll get if she wins and what she’ll lose (the stakes) if she doesn’t win.].

I’ve been a writer for Hub Pages since September 2014 and have been doing freelance work at Upwork since July 2016 [You can probably drop the months and just use the years]. I also blog about the books I’ve read and my writing endeavors. I’m highly active on Twitter and Facebook with the #writingcommunity. [Your book review/writing blog and social media activity aren’t super important (unless you have a massive following that gives you a strong platform), so you can cut these sentences. It’s okay if you don’t have much to put in your bio. Agents (and Pitch Wars mentors!) won’t be turned off if you don’t have experience. They’re really looking at the book/your writing.]

Per your guidelines, I’ve included the synopsis and the first chapter down below. My completed novel is available per request. [Not sure you need the second sentence since you’ve already mentioned it’s completed and the purpose of a query is to entice agents to ask for more. You could add a quick “Thank you for your consideration.” or something to that effect if you want.]

[You have great bones of a query here. You incorporate some fun phrasing and hints at voice, which helps set the tone for the manuscript. And you hit all the key elements needed to lay out the plot without giving the ending away. Also, I like your use of personalization (when appropriate for agents/mentors) and comps!

Overall, the query is a little too long and not as tightly focused as it could be. I think you could rework it to focus on the overarching story:

Paragraph 1: Intro of Sydney, her new injury and the implication that someone might have caused the accident because she was a whistleblower. (Set up the tension/suspense from the start.)

Paragraph 2: Intro of Alex as he’s trying to protect Sydney and figure out who is out to get her and intro the romance.

Paragraph 3: Intro of Jamie and his vendetta against Sydney and show the obstacles Sydney must face (both external—Jaimie’s revenge plot—and internal—her emotional reaction to having to retire, finding love and the unknown of what her future holds) and clearly show the stakes of what she will lose if she doesn’t reach her goal.

With some tightening and restructuring, I think this query will have a lot of punch. As with all critiques, these are just suggestions, and if they don’t work for you/your story, ignore them. Good luck!

Thank you, Susan, for the critique! We are showcasing three mentor critiques each day leading up to the Pitch Wars 2019 submission window, so make sure to read the other two critiques for today and come back tomorrow for more.