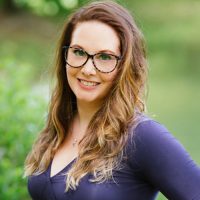 EMILY THIEDE is the author of This Vicious Grace, book one in a YA fantasy duology coming out June 28, 2022 with Wednesday Books. A former public school teacher, Emily teaches creative writing and serves on the board for Writer House, a local writing nonprofit, and is a co-host for the Basic Pitches podcast. An alumnus of PitchWars and Author Mentor Match, she loves mentoring aspiring authors, fostering kittens, and getting lost in the woods near her home in central Virginia. 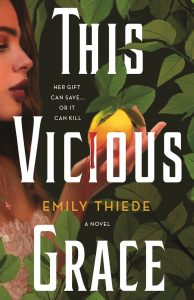 Three weddings. Three funerals. Alessa’s gift from the gods is supposed to magnify a partner’s magic, not kill every suitor she touches.

Now, with only weeks left until a hungry swarm of demons devours everything on her island home, Alessa is running out of time to find a partner and stop the invasion. When a powerful priest convinces the faithful that killing Alessa is the island’s only hope, her own soldiers try to assassinate her.

Desperate to survive, Alessa hires Dante, a cynical outcast marked as a killer, to become her personal bodyguard. But as rebellion explodes outside the gates, Dante’s dark secrets may be the biggest betrayal. He holds the key to her survival and her heart, but is he the one person who can help her master her gift or destroy her once and for all?

Emily Thiede’s exciting fantasy debut, This Vicious Grace, will keep readers turning the pages until the devastating conclusion and leave them primed for more!

Zoe Smith might enjoy having superpowers if not for her crippling obsessive-compulsive disorder. [Nice hooky opening line– Right up front we know who the character is, a key fact about her, and a challenge she is facing.] An unwilling test subject for government nanotech experiments when she was young, Zoe can now control metal thanks to government nanotech experiments, as well as produce and manipulate her own biometal from the palms of her hands. Because of violent, OCD-generated intrusive thoughts, Zoe refuses to use her powers, terrified she might hurt someone. [Agents skim queries quickly so it’s helpful to streamline for easy comprehension. I’d suggest tweaking and combining these sentences for simplicity. One way you could do so: “She can control metal and produce her own biometal after being an unwilling test subject for the government’s nanotech experiments, but she’s afraid to use her powers because of her violent, OCD-generated intrusive thoughts.”] Everything changes when Zoe has to use her powers to help some old friends and finds herself framed for mass murder. [I’d suggest trimming vague phrases like “everything changes” and instead, let the text show what changes, as in “But when Zoe uses her powers to help some old friends, she is framed for mass murder and goes on the run.”] Questioning her own sanity and running from the police and the people behind her powers, Zoe is recruited [Agents look for signs a character is active so watch out for passive phrasing or sentences that put the focus on the thing happening TO a character versus the character themselves. Here’s a quick and easy place where word choice can make the character feel more active and hint to agents that her decisions are driving the plot: instead of “Zoe is recruited” you could try “Zoe enlists/joins/allies herself with…”] by the charismatic Raphia, who leads a group of women subjected [another place where word choice can make characters feel more active: “group of women subjected to” could be “women who survived/endured” Again, it’s a minor tweak, but it centers the characters rather than the things happening to them and helps portray characters readers want to root for!] create to the same nanotech experiments and intent on bringing down those who wronged them.

To help her newfound allies and prevent future experiments, Zoe must fight against her own mind to control her powers and use them for good. Dodging sadistic government agents and one particularly irritable NYPD detective, Zoe finds herself [watch for phrases like “finds herself/is forced to/discovers/happens to, etc. Sometimes they’re needed but too many in a query can suggest a passive character who reacts instead of acts.] enmeshed in massive conspiracy and questioning who [she] can really trust. [A formula I like to make the stakes really pop is CHARACTER MUST ____ OR ELSE_____ (insert your own dun Dun DUNNNNNN sounds here) Think of it like a movie trailer! What’s that final line that will make readers go “Oh no!” One suggestion might be: Zoe needs her powers to help her newfound allies, but if she can’t fight her own mind to control her abilities…they could all die/she could end up as a lab rat again/a new generation of children could suffer their fate/ whatever the worst-case scenario is!… Big huge stakes are great, but personal stakes are powerful, too! What is the absolute worst thing ZOE can imagine?]

WhileTITLE  is my first novel, I possess extensive writing experience, having published articles, essays, poems, and short stories in a variety of college and independent publications. I also write for the anti-trafficking site stopmoderndayslavery.org. [Solid professional bio! You could add a few personal details here, since agents are people, too, and they are looking for a client, not just a book. Fictional example: I live in New Mexico and when I’m not writing I enjoy hiking with my dog.]

A near-future science fiction with mystery elements and plenty of dark humor, TITLE explores friendship, mental illness, and trauma recovery. Complete at 80,000 words, TITLE is intended for New Adult readers. [I’d flip the bio and metadata paragraphs to keep all the book info together with the bio last.]

Thank you for your time and consideration!

Well, this was a terrible idea. [Haha, nice! I love a voicey opening!]

I’m on my stomach under a cubical desk, heart tearing at my chest and thoughts doing the same to my brain. I have to salvage the wreckage of my plan, but my mind is hurting, my panic all I can think about. Although, since I am running for my life, maybe I should be focusing on other things.

Like the probably [If you can cut “probably” here I would. It’s often not needed and just waters down the impact]-highly-volatile explosives I’m carrying.

I’m in an old downtown office building, abandoned years ago. Despite extensive vandalism, it’s structurally sound and a refuge for the homeless, which included me for a while. [You could play around with phrasing to avoid a similar opening as the first paragraph and zoom in the POV a bit by incorporating the setting details into the action, for ex: “My hand crunches on a fast food wrapper left by another one of the homeless people who used to take refuge here as I peek around a graffitied cubicle. Despite extensive vandalism, the abandoned office building is structurally sound. For now.”]

My plan for tonight was simple: Steal the detonators for the demolition tomorrow and buy my friends here time to find other accommodations. Some of them are elderly and can’t survive outside this time of year. Not that the development company gives a damn.

Unfortunately, security spotted me right after I grabbed the detonators, fully screwing my plan. And after hiding, I realized the detonators I carelessly jammed into my bag already had charges attached.

I check again. Yep. Definitely attached to explosives. [This line and the previous line do the same work and this line is punchier, so I’d suggest cutting the first line. You could take it up another notch by having her discover this fact in the moment instead of telling us she realized it before the scene started. Like, she could think that at least it’s unlikely to blow without the charges attached and then check and have the “oh no” moment here on the page.]

Then the thought intrudes without warning. I should just set them off, they’ll explode anyway. Get it over with! [Excellent job showing the intrusive thoughts and conveying how unwelcome they are to her.]

I cram my hands under me, away from the detonators. What was I thinking? I don’t know what I’m doing! My mind thrashes, a familiar pain spreading from my chest and liquid metal starting to bead in my palms. [Nice way to show her powers and her conflicted feelings about them!]

[Nice job! This is a strong opening! You incorporated clues about the setting, character, situation, etc without info-dumping, so readers know enough to feel grounded in the scene and to get emotionally invested in the character. Even if I hadn’t read the query letter, I’d already have a lot of the information I’d need to understand what’s going on and what the character is grappling with, and that’s awesome! You could make a few minor line-level tweaks to incorporate those details with the action and keep the “camera” on the character more, but overall, you’ve gotten a lot of work done in a short excerpt and that’s always a challenge in SciFi and Fantasy, so nice work.]

Thank you, Emily, for the critique! We are showcasing three mentor critiques each day leading up to the Pitch Wars 2021 submission window, so make sure to read the other two critiques for today and come back tomorrow for more.