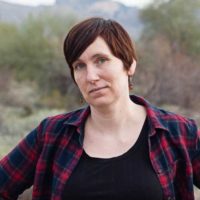 K.A. “Kai” Doore writes adult fantasy – mostly second world, mostly novels – with a touch of horror and a ton of adventure. She grew up in Florida, but has since lived in lush Washington, arid Arizona, and cherry-infused Michigan. While recovering from climate whiplash, she’s raised chickens, learned entirely too much about property assessment, photographed cacti, and developed online trainings. She lives with her microbiologist wife, two cats, and a small human.

Her debut, The Perfect Assassin – the first in what she keeps insisting is her queer assassins save the day trilogy – comes out in 2019 from Tor. 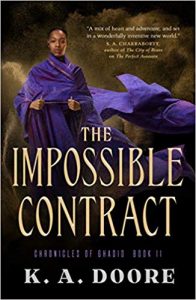 The Impossible Contract is the second book in K. A. Doore’s high fantasy adventure series the Chronicles of Ghadid, where a determined assassin travels to the heart of the Empire in pursuit of a powerful mark, for fans of Robin Hobb, Sarah J. Maas, and S. A. Chakraborty

An assassin’s reputation can mean life or death.

This holds especially true for Thana Basbowen, daughter of the legendary Serpent, who rules over Ghadid’s secret clan of assassins. When a top-tier contract drops in her lap ― death orders against foreign ambassador Heru Sametket ― Thana seizes the opportunity.

Yet she may be in over her head. Heru wields blasphemous powers against his enemies, and Thana isn’t the only person after his life: even the undead pursue him, leaving behind a trail of horror. Her mission leads her on a journey to the heart of a power-hungry empire, where dangers lurk around every corner. Her only ally is Mo, a determined healer set to protect Ghadid any way she can.

As further occult secrets are unleashed, however, the aftermath of this impossible contract may be more than anyone can handle.

Enid Penfield is a world-class neurologist smart enough to know [for most readers, neurologist carries the connotation of “smart enough;” try shortening to “neurologist who knows she can’t save everyone”] she can’t save everyone. Not even her son. She gives little thought to the Ganoid refugees [Can you give a timeframe around the refugees’ arrival to give more context as to society’s reaction to them? I would rather know a little more about the aliens, their arrival, and their subsequent place in the world than some of the later plot pieces. I need to care up front], the peaceful aliens sequestered beneath Toronto, as she works overtime to cure the rich and superficial of shopping addictions and lover’s quarrels [knowing more about the aliens would give this half of the sentence a bigger punch, and it’s already pretty powerful]. But when a notable negotiator is attacked and the Minister of Defence asks Enid to cure his alien-induced psychosis [whose? The negotiator or the Minister of Defence?], she’s captivated by the similarities to her son’s condition and can’t refuse.
[This first paragraph is an excellent set-up. We know Enid wants to save her son, but never thought she could, and now she’s being offered exactly that. At this point I want to know what the catch is.]

With the Minister of Defence demanding an impossible schedule, a confusing relationship with her new boss, Chief Inspector Gunner, testing doctor-patient ethics, and an alien-induced poison searing through her blood, Enid can’t go back to a life of indifference. Amidst projectile-hurling demonstrations and racially-charged riots, she betrays Gunner and plunges into danger, where she learns to care about the naturally gentle aliens despite their leader’s hostility and violence.
[This second paragraph has a lot of interesting stuff, but it’s a lot of interesting stuff all at once. Depending on how important it is to the plot, I would either expand on each of these pieces, end the query when Enid switches loyalties, and cut the last paragraph entirely or focus on just one or two things in the first sentence (say, confusing relationship with boss and wtf alien-induced poison). Either way, this will give you a little bit more room to talk about the aliens.]

When a human terrorist group breaches the underground labyrinth and threatens genocide [of the aliens, right?], Enid must decide whether to stay safe but let them die or risk her life. As the fight between The Force [who/what is the Force? Only name things you can explain. Speaking of which, do the aliens have a name?], the aliens, and the human terrorists spirals into chaos, she’s faced with a choice she never imagined. When it’s revealed the terrorist leader is someone she loves who’s responsible for her son’s condition, will she let the monster incite terror or take the monster out? [This last sentence might be too much plot for a query. I think you can roll it back to simply something about knowing that someone is responsible for her son’s condition.]

TITLE is a 95,000 word adult science-fiction novel that explores what it means to be human. It’s a District 9 meets Embassytown [I love these comps] stand-alone with series potential that will appeal to fans of the storytelling of Nnedi Okorafor and Jeff VanderMeer and the politically-charged works of China Mieville and Paolo Bacigalupi.

Thank you for your time and consideration!

[Overall, this is a strong query. You open with a clear idea of who the main character is, what they want, and what’s in their way. After that, there’re a lot of exciting and interesting things happening. In fact, I got lost because it was a few too many exciting and interesting things. I got the feeling that your query covers more than half your plot, when it should give just enough to entice; the entirety of your plot and its mechanics is what a synopsis is for.

Try to dial it back to the first third. I’d love to have known more about the aliens and society’s reaction to them, which colors so much of the rest of the query and is important to your plot. The District 9 comp gives a little more context, but I’d like to see that context in your own words.

You could easily end this query with Enid’s choice to betray Gunner, potentially risking any cure for her son – which is quite a lot of tension! This would give you more room to expand on what happens once Enid begins working with the Minister of Defense. It looks like Enid begins to question some of her own life choices, as well as her tightly-held indifference, and that extra insight into her character would make your query pop.

What drives this neurologist who was okay with throwing away her skills on the privileged to finally care about the disadvantaged and dispossessed? That’s a big and important shift and one you can spend an extra line or two on.]

Thank you, K.A., for the critique! We are showcasing three mentor critiques each day leading up to the Pitch Wars 2019 submission window, so make sure to read the other two critiques for today and come back tomorrow for more.