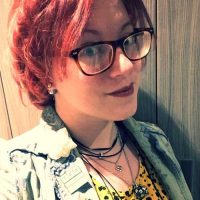 Ren has worked as a writer, creative producer and content contributor for games-related IP, and formerly managed communications for a non-profit arts council. She currently works in game dev, while also plotting her next twisty space novel. Ren graduated with a BA in History before completing a year of grad school in archaeology, indulging her lifelong passion for nerding out about the past just as much as the future. She loves weird mysteries, pop science, elaborate book playlists, and pondering about alternate universes. She lives in London, UK, where she frequently misses her stop on the underground because she was too busy reading. 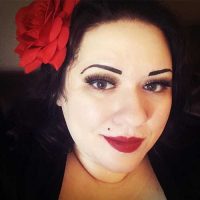 Kerbie Addis is a librarian and an intern for a major literary agency. She is represented by Bridget Smith of JABberywocky Literary. Kerbie has always worked or volunteered in bookstores and libraries, occasionally venturing into horror theory and presenting on panels at academic conferences. She was the marketing director for an indie bookstore, but left to finish her master’s degree in library science at Texas Woman’s University. Kerbie lives with her husband and a dog too fluffy for her own good in Philadelphia. She is an avid collector of vintage tea cups, crystals, and Halloween decor. Oh, and of course, books.

I am seeking representation for my 101,000-word adult sci-fi space opera, TITLE. [you can omit ‘sci-fi’ since ‘space opera’ already conveys this]

Humans don’t get involved in galactic politics. [We suggest cutting this line, because (a) there isn’t a great deal of politics in the query, (b) we are unsure which characters are human and which ones are alien, and (c) we’re a little confused by “don’t get involved.” They would have to be involved at some level, wouldn’t they?] It has been that way since the first human colonists drifted into the Cirilis Galaxy several millennia ago. And for thirty-eight-year-old [For an adult ms, you generally don’t need to include the MC’s age] botanist Doctor Astrid Johnson that works just fine. As a terraforming scientist on a small, nondescript moon, Astrid leads a comfortable life. She gets to research soil combinations, tend to her personal crop of mushrooms, [This is about 35 words that can be boiled down to “Doctor Astrid Johnson is a terraforming scientist living comfortably on a nondescript moon”] and best of all, spend time with her son Connor who works security for the perimeter. But when a mysterious new alien fleet arrives in the galaxy, Astrid’s perfect world, quite literally, burns to the ground.

[You’ll want to define the inciting incident a little earlier in your query. This first paragraph – up until the final sentence – doesn’t tell us much yet about what sets off the events of the story. You could rework this opening paragraph to speed us along into the action, and start by immediately introducing us to Astrid and her loss: Doctor Astrid Johnson is a terraforming scientist living comfortably on a nondescript moon, content to remain far away from the galaxy’s drama. But when a mysterious alien fleet arrives, Astrid’s perfect life burns to the ground – she loses her farm, her research, and her son.]

Waking alone and severely scarred in an escape pod on a distant planet, Astrid sees no reason to go on. She’s lost her farm and her son, and now she wants nothing more than to return to her decimated home and waste away. [You can remove most of the second sentence here – we have seen what she lost in the previous paragraph.] In a desperate act, she sneaks aboard an Aarakeshi [You can just say ‘alien’ here – try to cut back on proper nouns] reconnaissance ship that’s headed back into the war zone, hoping she can get closer to her goal. [Can you clarify her goal here? Is it just that she’s trying to hitchhike back to her destroyed moon, or something more? You could dig into Astrid’s feelings a bit more – is she bitter? Does she want revenge on the aliens, assuming these are the same aliens who destroyed her home? Is she intending to do something to the ship?] But when she’s discovered, Astrid must decide if helping the ship’s captain [helping him do what?] is worth the cost of letting him be privy to her trauma and pain, and whether or not a single human can make a difference in a galaxy on the brink of war. [This final sentence feels a bit vague. Tell us what specific difference she could make, or what the choice is that she faces – does the captain want information she knows, something that will turn the tides of the war?]

[The above paragraph would be a great place to specify the stakes for Astrid. What does Astrid really want, and what is standing in her way? What does the captain of the ship need her help with? And what are the consequences if she doesn’t help him?]

Raised on the tiraakah homeworld by one of the Aarakeshi Fleet’s finest military commanders, [These terms are unfamiliar to the reader, so they can feel overwhelming. Use descriptives instead, eg: ‘Raised on an alien homeworld by a high-ranking military commander…’] Captain Jiiran Kaalyr is no stranger to war and desolation. Taught to protect and serve his people, [Who are ‘his people’? Is he human? This might be a good opportunity to explain if he is a human who was raised by an alien guardian, or if he is a non-human character] Jiiran has spent his whole life balancing his dedication to the Fleet and adhering to his belief in the inherent connection between all living beings. [Are these two things in opposition? Is he balancing his dedication to the Fleet, which is combative in nature, to his affinity for living beings, which is a peaceful calling? Perhaps clarify what two forces are pulling him in opposite directions, and why he feels conflicted by this.] But while there has never been a shortage of conflict between the major powers in the Cirilis Galaxy, the newest threat creeping along the edges of civilized space is something completely different, something even their best ships and weaponry cannot defeat. [You can cut this down & start at the most impactful part: But a new threat is creeping along the edges of civilized space…]

[This final line is quite vague – we haven’t heard about law or faith before, and there isn’t enough context to make this connect strongly to anything we know about. You’ll want to hit us with a big punch at the end – really make us feel Jiiran’s personal stakes as well as the consequences galactically if he makes the wrong choice here! Eg: ‘If Jiiran makes choice A, it could have consequence X for him personally. But if he does B, then Y could bring about the collapse of galactic civilization.’]

While this book has been written as the first in a trilogy, it can stand alone. I believe it will appeal to readers of Becky Chambers’ WAYFARER’S SERIES and lovers of Bioware’s MASS EFFECT games. [These are fantastic comps! You may just want to add a little flavour about why each comp applies, for example ‘intimately character-focused space opera like Becky Chambers’ WAYFARERS series’]

Thank you so much,

[From the query, we’re getting the idea that this is a dual POV book. You don’t necessarily have to tell us the entire background/stakes for each POV character. For clarity, you may need to focus on the one with the most to lose in your query, which seems like it would be Dr. Johnson. As it is, with both perspectives in the query, we actually know less about what’s going on because we still don’t know what either character’s goals and motivations are. We don’t know how Dr. Johnson and Jiiran will be helping each other. If you choose to focus on one character’s POV for your query, you can include a short paragraph explaining how their stakes intertwine with the other character’s, or a short note that says “This book includes the POV of both Dr. Johnson and Jiiran, a ship captain that helps her do X.”]

Thank you, Ren & Kerbie, for the critique! We are showcasing three mentor critiques each day leading up to the Pitch Wars 2019 submission window, so make sure to read the other two critiques for today and come back tomorrow for more.