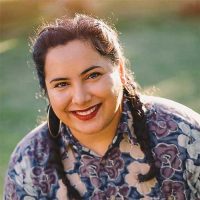 Sonora Reyes is a queer first-generation immigrant who writes fiction full of queer and Latinx characters in a variety of genres. Sonora is also the creator and host of #QPOCChat, a monthly community-building Twitter chat for queer writers of color. They currently live in Arizona, in a multigenerational family home with a small pack of dogs who run the place. Their debut book, THE LESBIANA’S GUIDE TO CATHOLIC SCHOOL, comes out next year.

Seventeen-year-old Yamilet Flores prefers drawing attention for her killer eyeliner, not for being the new kid at a mostly white, very rich, Catholic school. But at least here no one knows she’s gay, and Yami intends to keep it that way. After being outed by her crush and ex-best friend, she could use the fresh start.

At Slayton Catholic, Yami has new priorities: make her mom proud, keep her brother out of trouble, and most importantly, don’t fall in love. Granted, she’s never been great at any of those things, but that’s a problem for Future Yami.

The thing is, it’s hard to fake being straight when Bo, the only openly queer girl at school, is so annoyingly perfect. And talented. And confident. And cute. So cute. Yami isn’t sure if she likes Bo or if she’s just jealous of her unapologetic nature. Either way, she isn’t ready to make the same mistake again. If word got to her mom, she could face a lot worse than rejection.

But these aren’t run-of-the-mill spies—they’re prairie dogs. The upside: they’ve been genetically engineered with the ability to speak and have a clandestine network of tunnels beneath the nation’s capital. The downside? No opposable thumbs. [lol]

When Pepperworth gets wind of Ky’s interference, he takes drastic steps of revenge: blocking tunnel access, arresting Mom as an accomplice, attacking the prairie dogs, and pinning the deed on Ky. [What deed? Treason, or attacking the prairie dogs? Be specific!] Ky must muster confidence in himself to fight back—for his family’s sake and the country’s. [This paragraph also gives a lot of information that may not be necessary for the query letter. Maybe keep it to something simpler like: “But when Ky is framed for ___, he must build up the confidence to fight back—for his family’s sake and for the country’s.” Also, “must muster” reads a little awkward.]

Complete at 43,000 words, [MANUSCRIPT TITLE] [say the category and genre here! (manuscript title) is a MG (genre) that will appeal to…] that will appeal to readers of FRAMED! by James Ponti and the BOOK SCAVENGER series by Jennifer Chambliss Bertman. Like Milo in Kate Milford’s GREENGLASS HOUSE, Ky is adopted. [What happened to the letter from the birthfather? Did he ever get the courage to respond? I think if you have that part more fleshed out, you don’t need the Greenglass House comp.]

I am a member of the Society of Children’s Book Writers and Illustrators[Just say SCBWI, agents will know what that is.] as well as The Writer’s Center, where I’ve studied with middle-grade author Erica Perl, novelist Aaron Hamburger, memoirist Leslie Pietrzyk, and poet Jane Hilberry. I’m an adoptive parent.

This is a simultaneous submission. I am including the first [X] pages below. Thank you for your time and consideration.

[You’ve got a super unique story here! I think with just a few tweaks, this query letter will really shine! Good luck with the querying!]

Twelve-year-old Ky Knight[“Twelve-year-old Ky knight” reads like a query letter, you can just say “Ky.” Anyone who reads the book will probably be able to guess Ky’s age based on either the query letter, the book jacket summary, or the cover.] drummed his fingers on the dining room table. The melting ice cubes plinked in his water glass. On the white dinner plate in front of him, a gooey green sauce bubbled atop a breast of chicken. His fork and knife and blue cloth napkin lay in a neat row. Across the table, his fifteen-year-old sister [I think saying “older sister” would read a little more naturally] Rae sat on her hands, as if she were holding back from taking a bite out of the table itself.

The chair to Ky’s left was empty. [I feel like this paragraph is a much better opening to the book. You can pretty much swap the first and second paragraph and it would read just fine. Opening with this paragraph gives the reader a hook right from the beginning.] It wasn’t like Dad to be late. Dad was a scientist for the federal government and a creature of routine. Every day he donned a bowtie and packed a turkey sandwich and dashed off to his laboratory at the Federal Intelligence Agency in downtown Washington, D.C. And he was always home for dinner. Always.

Mom hurried into the dining room and set down a bowl of steaming vegetables. She brushed away a straggle of hair and looked at her wristwatch. “Still haven’t heard from him,” she said. “Go ahead, kids, before everything gets cold.”

Rae pounced for the bowl and spooned a mountain of Brussel sprouts on her plate. “I’m so hungry. Coach ran us so hard in practice.”

“Maybe,” Mom said, her eyebrow raised a notch, “you could leave some for the rest of us.”

Mom reached for the serving spoon. “No, Rae, you can’t.”

Rae was quicker on the draw and added another scoop.

[This is a really good opening! I think with switching up the first and second paragraphs, it will read much more smoothly. Other than that, I think this is really solid! Good job!]

Thank you, Sonora, for the critique! We are showcasing three mentor critiques each day leading up to the Pitch Wars 2021 submission window, so make sure to read the other two critiques for today and come back tomorrow for more.