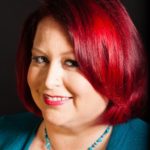 Sarah Hawthorne lives in the Pacific Northwest where she drinks too much coffee, plans a lot of vacations and writes romance novels. Her native habitats include her garden and the local library. Sarah received a Bachelor’s Degree from California State Polytechnic University of Pomona, Los Angeles with a major in history and a minor in English.
She is the author of the Demon Horde Motorcycle Club Series. The series is a sweeter take on motorcycle club/biker romance genre, published by Carina Press/Harlequin. She is represented by Jessica Alvarez at BookEnds Literary. Sarah was a 2016 Golden Heart Finalist (contemporary short) and the winner of the 2015 Heart to Heart Award (erotica). 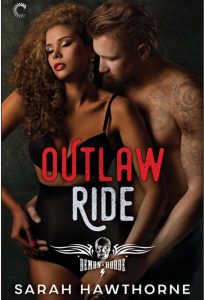 Hard-living biker Clint Remmick is fiercely loyal to the boys of the Demon Horde motorcycle club. He’s worked hard to redeem himself, and there’s no risk he won’t take to help his brothers, even when rivals threaten their safety. When his grandmother’s health takes a turn for the worse, though, he moves out of the clubhouse to take care of her. With his duties for the MC, he knows he can’t do it alone, so he hires Jo, a live-in nurse.

He didn’t expect her to heal him, as well.

Jo Smith enjoys working for sweet old Anne Remmick, and she’s especially intrigued by her tattooed bad-boy grandson. Clint’s tough exterior scares her a little, but she feels a pull toward the sexy biker. Soon she’s dying to close the distance between them.

When Clint and his brothers have to pull a dangerous job in Reno, Jo is the perfect cover. With enemies around every corner, Clint needs to focus on keeping her safe—not the lust simmering between them. But when Clint is trapped by a rival club, Jo will have to save him…and their relationship.

TITLE is a 90,000 word literary novel which brings elements of humor, romance, and the supernatural to a story about family and diaspora. Jaeson is a middle-aged translator whose bipolar disorder has estranged him from his family, friends, ambitions, body and mind. As a gay man he feels marginalized by the other immigrants in LA’s Koreatown. [Is Jaeson Korean?]  Then a country shaman [like some guy who lives out in the country? Or is he from Korea?] tells him that he has the gift to speak to ghosts and Jaeson begins to reconceive his liminality as power.

Manic or perhaps Shaman-sick, Jaeson returns to Seoul for the first time in two decades. [Okay so some shaman told me I can speak to the dead. Unless I had some sort of previous experience, I would just laugh and move on…but I guess J does not? Why does he go to Korea if the shaman is in Los Angeles?] Accompanied by the ghost of his first love, a community of translators, and a group of dead old men, he navigates a Korea both familiar and unfamiliar, becoming convinced that only someone like him — a translator-shaman — can mediate the sharp generational divides and heal both individual and collective trauma. [There is a lot happening here for the reader to unpack. Ghosts, Korea, translator-shaman, family problems…I feel like this is the meat of the story and it’s all sort of listed in a single sentence without much exploration.] With a rebuilt personal mythology, Jaeson is finally able to return to his father’s home in a confrontation that interrogates whether it is possible to break generational cycles of trauma.

My short stories have appeared in Your Impossible Voice, Drunken Boat, Transpacificism, and the anthology Afterness: Literature from the New Transnational Asia. I have collaborated with artist Martha Sakellariou to produce the interdisciplinary, site-specific installations Plat du Jour, The Cubberley Project, and One Home Only: Iterations.  I have a BA and MA from Stanford University and an MFA from City University in Hong Kong.

Thanks so much for your time and consideration.

[1. I will reference my third point from the first page critique. I don’t know Jaeson at all. What is his goal in life? Why does he want to do this? There’s plenty of events listed that I think provide conflict, but I cannot recognize that conflict without understanding the character’s goals or motivations.

2. The font changes in the last paragraphs, but grammar is better. Please check every detail before sending it to query.

3. The story has some eye catching items (shaman, ghosts, etc) but I need more about the main character to want to read more. ]

Your boss Dr. Pak relishes the alliteration of his name and title and you all indulge him by using the Korean title paksa even when speaking English. [Why do you indulge him?] Pak Paksa! Pak Paksa! You all follow him chirping like a flock of baby sparrows. Usually translators would avoid this kind of code-switching lest they dismantle the boundary between languages and get lost during a job. But you enjoy the look of glee on Pak Paksa’s face whenever you emphasize the homophonic syllables.[What exactly is the job ? The setting ? I’m thinking of a teaching hospital with interns following him around ? Is he a medical doctor ?]

Dr. Pak prances around town in polka-dotted socks and a pink tie and somehow everyone finds this delightfully charming. If you dressed like that they would whisper behind your back about parading your homosexuality. [Is the MC gay/homosexual? I don’t quite know for sure from that sentence] Pak Paksa pays for drinks after golf, listens earnestly to everyone else’s marital problems, and greets the church pastor with an obsequious bow. He places his offering just visible enough that everyone notes the thickness of the wad of cash, but quick enough that people will note his humility. When his wife is at Bible study he’ll have a quickie with the H-Mart agassi. [How do I know all this stuff? It’s pretty private and very much beyond a doctor/intern relationship. Also, what is an Agassi?] His doctorate (if he even has one) must be in kinesiology or hotel management from some no-name university. [Okay, so no hospital/medical setting then?] Certainly nothing having to do with language. He’s a terrible translator but a great showman and he provides you with a constant diet of amusement as well as this job that has kept you alive for the last five years. [Please explore motivations more!]

Let’s face it: your world is absurd. [it doesn’t seem absurd to me? The MC is putting up with a crazy boss in exchange for a paycheck. A lot of people do that.] You might as well enjoy the entertainment.

[1. Pak Paksa is a funny character and I want to read more about him….but he’s also not the main character. Almost every sentence/detail is about a minor character. I don’t really feel like I know the MC at all. I would like to see the first page be about the main character. If I read the back of the book (or your query) and this was the first chapter, I would be very confused.

2. There are quite a few missing commas (introductory adverbs and subordinate clauses especially). Please run it through grammar check. This is especially concerning based on your impressive education listed in the query. I think it is probably more of a case of you writing quickly, but the attention to detail needs to be very high on an initial query.

3. I left in notes about my thought processes as I read through the piece. There are quite a few details in your head that need to be on the paper to help the reader follow the story. Remember the three elements of story: goals, motivation, and conflict. I did not get a single element in this selection. I have no idea what the MC is doing in life, why, or what is standing in his/her/their way.

4. Please don’t think that I didn’t enjoy this. I really liked the description of Pak Paksa I thought it was witty and interesting. The premise of the book sounds fun. Ghosts? A shaman? Koreatown in LA? YES PLEASE.  The second person POV threw me a little bit, but the description of Pak Paksa was well drawn and I would be interested to see an entire book written in this style. Well done.]

Thank you, Sarah, for the critique! We are showcasing three mentor critiques each day leading up to the Pitch Wars 2021 submission window, so make sure to read the other two critiques for today and come back tomorrow for more.