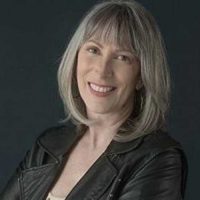 Gwynne Jackson has tried her hand at almost every genre. The ones she loves writing most are romance (she was a 2018 Golden Heart® finalist in contemporary romance), women’s fiction, and mainstream. She likes to explore human relationships and interactions through fiction, and her stories almost always include growth, found family, and people who can’t help being their unapologetic, most complicated selves.

If you’ve been looking for someone to blame for the Twitter #FridayKiss prompts, congratulations! You just found her. When she’s not writing or thinking up prompts for you, she’s probably working on a variety of art projects, traveling, trying out exotic muffin recipes, or dreaming up new worlds for you to experience. She lives somewhere off the coast of Seattle with her family, pets, and a brazen band of local otters.

“Why are you doing this to me?” Jason Donaldson sobbed, tears running down his cheeks as he cradled his bloody hand to his chest.

The shadowy figure didn’t answer, knowing his silence would induce far more fear than anything he could say. Fear was only one thing he wanted from Jason Donaldson. Justice doubted Donaldson had ever truly known fear. He would know it tonight.

[For my money, this next paragraph is where you want to start your first chapter. Can you imagine picking up a book and seeing a severed ring finger dropped into a plastic bag right off the bat? What? Where? Why? When? I’d be all about that. It would involve a little rewriting of the first sentence, but that’s easily done. I’d also find a place to reuse the line about Donaldson knowing fear tonight, because it’s a good one.]

Justice dropped Donaldson’s [If you do start the chapter on this sentence, you don’t necessarily want Donaldson named here. Justice can just drop THE finger and we can find out who it belongs to later.] newly severed ring finger into a zip-top plastic bag and sealed it. He then shifted his attention to the hood of the beige sedan next to him. The glossy black box was barely noticeable against the dark night. [But it would be noticeable against the hood of a beige sedan.] Justice removed the lid from the box and gently wrapped Donaldson’s  [Or if you took his name out above, THE finger] finger [in?]white tissue paper. [Is it still in the plastic bag?] He nestled the finger in the box, surrounding it with even more tissue paper, and replaced the lid. He carefully tied the white ribbon around the box, mentally picturing the steps from the internet video he’d used to learn how to make a bow. [Now this is interesting. At first I was going to say you’ve got too much choreography going on here, but it makes sense if this is a series of steps Justice had to memorize. It also makes me wonder who or what he is, if he doesn’t know how to tie a bow. In any event, thank you, YouTube!] [But also, you’ve got a couple of sentences in a row starting with “he” so you might want to mix it up. Variety being the spice of life and all, it makes for more interesting reading as well] It wasn’t perfect, but it was his best one yet. He slid the pre-written card under the ribbon, a sense of pride swelling within him. She’d love her present. He just knew it.

A whimper sounded from behind him, pulling him out of his thoughts. [Your action in the next sentence shows us that Justice is pulled out of his thoughts, so you don’t need to tell us that as well. Note: with most suspense, you want the sentences to be spare and crisp, so sharpen your virtual pencil and pare down the telling! Your story will shine for it.]

Justice eyed Donaldson [If you’ve left Donaldson’s name out this far, you might leave it out here too? I know we need to put a name to him at some point, but it seems less important than the fact the man’s got a bullet hole in his knee and is missing one very well-wrapped finger.]. Mud matted his thinning blonde hair. His black Armani suit had a hole at the knee where a bullet tore through the cloth on the way to flesh and bone.  His once crisp white shirt was now covered with his own blood and vomit. [This would be a good place for the knowing fear line, maybe.]

Sensations of dominance and righteousness coursed through him. [Can you think of a way to show this instead of telling this? What do dominance and righteousness look like or feel like for Justice? Do they make him shiver? Does the blood boil in his veins? Does it all make him want to laugh into the night air? You get the idea.] Donaldson, the well- respected head of one of the biggest banks in the country, had sat in front of Congress this morning defending his bank’s practice of gouging hardworking people with junk fees. Justice had watched, his rage growing until it almost overwhelmed him. [Can you show how his rage grew and almost overwhelmed him rather than tell us?]

[All of this makes me curious about Justice. Is he/it/they human? A manifestation? The physical embodiment of the concept of Justice? It’s good that I’m asking these questions. You’ve left enough unsaid so that I would read on to find out what’s going on here.

Thank you for trusting me with your words!]

Thank you, Gwynne, for the critique! We are showcasing three mentor critiques each day leading up to the Pitch Wars 2019 submission window, so make sure to read the other two critiques for today and come back tomorrow for more.