Carnations Do Matter by Nikki Roberti

It started when I was 12. My parents moved me to a Christian private school because my brother had issues with a local middle school and had thrived from his own move their two years prior. However, my brother and I were very different people, and while the move was great for him, it nearly killed me. On multiple levels.

There were only 19 kids in the whole seventh grade…and 15 of them were girls– girls who had mostly grown up with each other in the same class since kindergarten. Here I was–new. New and “weird” according to them. They’d spend hours arguing over whose shoes were the whitest. Mine weren’t even white. Obviously I was a freak. I was the kid who enjoyed school and got good grades and had horrible fears over breaking the rules.

It started small at first. Any time I’d open my mouth, I was met with an eye roll. But then the whispers started to grow and paranoia set in. I was assured that I went to school with nice Christian girls. It couldn’t all be bad. It must be in my head.

But then girls put Elmers Glue in my hair. When I asked why, a girl responded, “I didn’t think it would hurt you” and acted like I was crazy for questioning her at all. When I cried, they told me they’d “pray for me.” Yay Christian school.

When we were all standing on a stage during some down time, the girls were doing impressions of movies. I chimed in with my favorite line from “A Bug’s Life” saying, “I am a beautiful butterfly!” (in the funny caterpillar’s voice and everything!). But instead of joining in on the fun like I had hoped, I was met with a girl on either side of me, grabbing me by the arms shouting, “You’re not beautiful!” as they threw me off the stage.

I decided the only way to deal with this sort of environment was to remove myself from it. At first I made friends with the few boys in the class, but the girls ruined that by doing the classic “you must be in love with her” type shenanigans and all my guy friends refused to talk to me too.

So, I hung out with the older students–some as old as juniors who thought having a pet seventh grader to protect was charming. But somehow the mean girls in my seventh grade class tried to ruin that for me too. I’ll never forget on Valentine’s Day when the carnation fundraiser was delivered and I somehow had the most flowers in the class. The popular girl with the second most looked at me with utter disgust and explained that none of mine counted because they weren’t from hot guys.

Ridiculous. But stupid seventh grade me believed them.

Seventh grade me looked at my flowers and believed they were worthless. What should have been a symbol of the friendships I did have somehow got tainted by the words of a kid that I chose to believe.

That’s the worst part of bullying. It’s the way people get inside your head and steal who you are, they steal your joy, and somehow take your identity and make you think it’s something else.

It wasn’t until I was in college that I started working through the side effects of bullying or even realizing how the bullying from junior high had carried over throughout my life. I had dated a guy significantly older than me in high school because I was slightly desperate for acceptance and beyond afraid of dating guys my own age. And I still had the bad habit of believing people and their stupid lies–like freshman year of college how I confided in a friend about having a crush on a senior and she told me I was delusional to believe anyone like him could even look at me and find me attractive (spoiler alert: he did. But because I believed the friend, we never went on more than one date because I couldn’t fathom him actually liking me).

If it’s one thing the bullying has taught me, it’s how important belief in ourselves is. They can tell us we’re nothings all they want, but it’s not until we believe them that their words have power.

And then, when you think about it, it’s us who has become our own bully.

In Peter Pan, I always thought it was so stupid that a fairy could die because someone didn’t believe in her. Even worse, the only way to resurrect her was a stupid sing-song-clappy combo shouting, “I DO BELIEVE IN FAIRIES! I DO! I DO!”

But while it seemed silly as a kid, now that I’m older, I realize how true it is in with our own lives. It’s easy to die on the inside when someone’s words somehow shatter our belief systems, especially our belief in ourselves.
Only, when bullies are involved, no amount of clapping to a song can bring us out of the inward death we’ve be subjected to. Instead, we have to find a way to pull ourselves out on our own.
It wasn’t until I could accept myself and reestablish any kind of positive belief in me that I could heal. Eventually, I ditched the toxic friends in my life. I dumped the older boyfriend. I even reestablished my Christian faith after dealing with the realization that even some Christians can be hateful and mean, but they didn’t have the right to take my faith from me. And the un-beautiful girl thrown from a stage was able to look in the mirror and realize she wasn’t that bad.

I let go of junior high.

And even though it took almost a decade to do so, I was able to look around at my life and see the carnations I had around me and choose to believe in their worth–not give undeserved worth to the words of hateful people trying to tear me down. People will always tell you your carnations don’t matter. But their words only have power if you let them. I wish I had known that then. But at least now, I know I’ll never let anyone affect my belief in myself ever again. And because of that, I’m invincible. We all are. 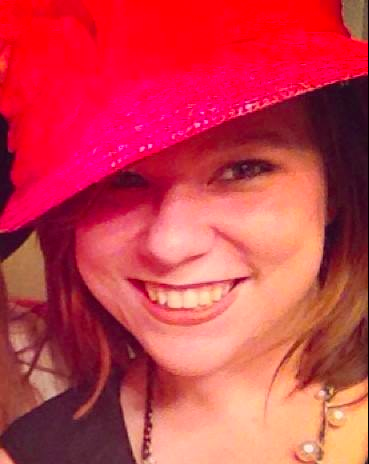 She is also a professional journalist and marketer with more than ten years of published writing experience. She currently works full-time writing feature articles and marketing copy at the international relief non-profit, Samaritan’s Purse,  while also freelancing for various magazines and sites such as WeTV, Engagement 101, Parents magazine, and NBC’s iVillage.com. She was also the founder and editor-in-chief of REALITY Check Girl Magazine, which was featured in the Washington Post online.

Before writing novels, she was a seven-time award winning playwright with her short pieces performed around the country, including The Kennedy Center in D.C. She is also an avid young adult/middle grade author and was selected to be featured in the 2014 Pitch Wars for her young adult contemporary, THE TRUTH ABOUT TWO-SHOES  and mentored by author Rachel Lynn Solomon.

But also in her spare time she enjoys cooking, making balloon sculptures and blogging about her author adventures and attempt at living a happy, healthy married life at www.MrsHealthyEverAfter.com.

“Is it Rude, Is it Mean, or Is it Bullying?”: https://www.psychologytoday.com/blog/passive-aggressive-diaries/201211/is-it-rude-is-it-mean-or-is-it-bullying