Sometimes when we pass in the hall

I’m invisible, though we both wear

Showing off for your latest boy,

you scan the crowd for some new toy

to play with, pick apart and tease.

I melt into shadows. I hide. I freeze.

I’m quasi human, not quite here.

When you look at me, I disappear. 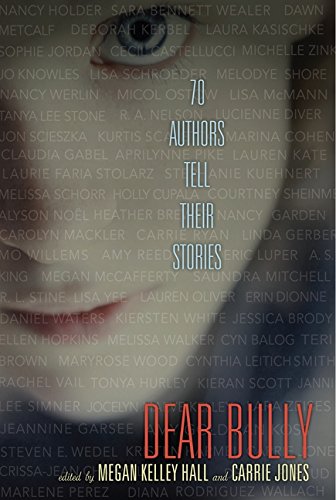 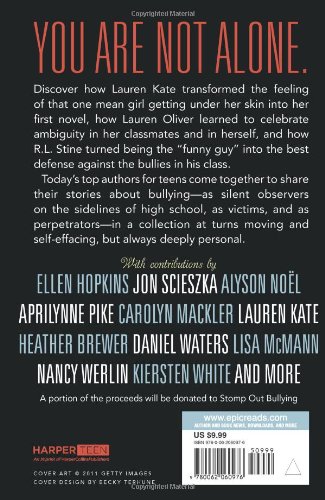 Writing “Dear Bully” brought up memories of my own bully, an ex-boyfriend. (Admission: I own but have not yet read the Dear Bully anthology, probably because of the memories it’s likely to trigger.)

We broke up at the end of sophomore year in high school, but stayed friends, sometimes more than that, for a few months. Then I left the tight social circle we shared.

It was hard to walk away from some of those friendships, but I wasn’t ready for the drinking–and other things–that were happening when we hung out together.

After a year-long relationship with my ex, I had left many other friendships untended. Only a handful of old friends were willing to welcome me back, so I felt isolated at school.

Midway through junior year, we all started driving. That’s when the real bullying started. My ex would sit in his car and wait for me in the school parking lot. Every day. It didn’t matter what time I left. Whether I stayed at school until 6 PM, or left immediately after the bell, he was there.

As soon as I started to pull out of the lot, my ex would slam his foot on the accelerator and cut  me off, swerving to miss my car and beat me through the lot’s single exit. I don’t know how many times he nearly hit me.

It went on for months. I began to panic every time I had to stay after school, but I never told my parents. I never told a teacher. I didn’t want to admit this was happening.

Finally, a dear friend told her parents, who told mine. The car-bullying stopped, but things did not get easier at school. Every day, I felt the way the speaker in my poem does. I wished I were invisible, below the radar. But I also felt invisible, as former friends disappeared from my life.

Almost 30 years later, this incident is still painful. That’s probably why I haven’t talked about it much, even as an adult. 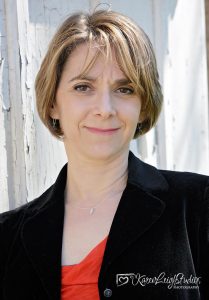 I am a writer because I grew up listening to the different ways that people talk and use language. When I was little, I lived with people from three diverse cultures. My father, a kid from the Bronx, New York, met my mother at the 1964 World’s Fair. She was from a small town in Nottingham, England (you’ve heard of Robin Hood). After they got married, my parents lived in Thailand for a year and became friends with the Osathanugrah family. Around the time I was born, the Osathanugrahs’ two teenage boys came to live with us and attend school in the U.S. Imagine the mix of accents my ears had to tune into every day!

By the time I was in second grade, my Thai brothers were gone, and I had two younger brothers in their place. Teachers seemed to like my writing. A few of my poems and stories were published in PTA newsletters. But it was reading the novel, Jane Eyre, by Emily Bronte, that made me want to be a writer.

I was reading on my bed on a sunny spring weekend when I was about twelve. I looked up from sad Jane and the gray, windy moors of England and saw — through my window — my younger brothers playing outside. How could my mind be with Jane Eyre on the desolate moors when I was physically in New Jersey, in my own room? I felt like Alice in Wonderland at the moment she is in both worlds, the real one and the one beyond the mirror. I wanted to be able to take people to far away places and times with my words, the way Emily Bronte did with Jane Eyre.

I spent a lot of my time at Ramapo High School in Franklin Lakes, NJ writing in my journal, working on the school literary magazine, and dreaming of being a writer. I tried other activities (marching band, fencing) until I hurt my knee. Having to sit out sports made me focus on writing even more. When I received my college acceptance letter from New York University’s Dramatic Writing Program, I knew I was on my writing path.

Tuning in, listening to the way people talk and the things that they said – these were skills I learned as a young child, even though I didn’t know I was learning them. I still use those skills today, especially in my writing. I had always written poetry, but I began to take workshops with some wonderful poets through the Geraldine R. Dodge Poetry Program. When my family moved to Maryland, I became a poet-in-the-schools for the Maryland State Arts Council’s Artist-in-Education program.

Writing poetry with kids is one of my favorite ways to share my love of words, language, and interesting people like the ones you will meet in The Last Fifth Grade of Emerson Elementary.

“Is it Rude, Is it Mean, or Is it Bullying?”: https://www.psychologytoday.com/blog/passive-aggressive-diaries/201211/is-it-rude-is-it-mean-or-is-it-bullying