In 2017, I wasn’t anyone’s first-choice pick for Pitch Wars. I only got in because my mentor, Jen Vincent, was a secret mentor and had selected two mentees who hadn’t been chosen by other mentors. I have to admit that, at first, I was disappointed that my MG manuscript—a quiet #ownvoices story about a boy who wants to connect to his father and win a fishing contest—wasn’t one that attracted all the love-at-first-sight and attention that others seemed to.

But it didn’t really matter. What mattered was that I was about to embark on my most intense editing and revising experience ever.

My mentor took her job very seriously. I had never had anyone read my work so closely. Although I wasn’t new to writing (I had been working on a memoir for almost ten years), I was new to middle-grade fiction, and Jen gave me resources that probably other mentees already knew about (like beat sheets and Save the Cat). I had always been a seat-of-my-pants writer, so it was an important learning experience to methodically work through the beats of the narrative and look closely at goal, conflict, and motivation.

Besides helping me work through the craft of rewriting, Jen also was able to give feedback from a unique perspective since she is also Latinx. Because my book is about a multi-ethnic kid (Colombian and white) struggling with his identity and place in the world, I appreciated having a mentor who could bring some of her own experiences to her critiques. I realized that, as a writer of #ownvoices stories, it was—and is—important to have people in my court who are not only cheering on my manuscript but also the broader context of the story. So much of finding a mentor in Pitch Wars or any other venue is about the match between the mentee and the mentor.

After two full revisions of the manuscript and dozens of revisions on the first page and the pitch, I was a nervous wreck by the time the showcase came around. But I knew that, with Jen’s help, I had brought the pages and pitch as far as I could and knowing that helped to settle my nerves somewhat. On the day of the showcase, I watched agents fall in love with other pitches, and I masochistically kept track of how many requests other manuscripts were getting. Then a few started trickling in for mine, but I already knew, I think, that my book wouldn’t be a first pick for agents anymore than it was in the mentor round. And I also knew, at some level, that this business isn’t always about being the shiniest or the most popular. A writing career is a long game. It’s about working hard and finding readers—whether they’re kids or mentors, agents or editors—that connect with your words.

In the end, I had a few requests for full manuscripts, but the wait to hear back seemed interminable. While I was waiting, I continued to tweak and edit the book, knowing that if Jen and I could spend a month on the first page, I probably had a lot more work I could do. Then, many months later, I was approached by an editor at a university press who wanted to publish my memoir. When I told the editor that I also had a middle-grade novel, he jumped at that, too. Armed with that good news, I was able to go back to the agents who still had my manuscript from the Pitch Wars showcase. And that’s how I ended up with my agent, the fabulous Thao Le of Sandra Dijkstra Literary Agency.

When I started Pitch Wars, I would have thought that the story ended there—with that one happy ending of signing with an agent. But finding an agent is only one step along the way. No more or less important than finishing a manuscript, editing and revising a fifth or sixth or twentieth draft, finding trustworthy critique partners, applying for opportunities like Pitch Wars, submitting work, querying agents, and even starting new projects.

Now, three years later, my book—the manuscript I pitched for Pitch Wars—is being published with a major publisher. And I couldn’t have done it without countless revisions, being open to critique and learning, and having great people on my side. You just have to keep going—even if you’re not someone’s first pick. 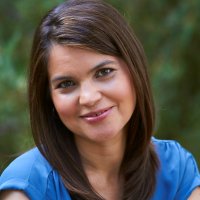 Anika Fajardo was born in Colombia and raised in Minnesota. She wrote a book about that experience, Magical Realism for Non-Believers: A Memoir of Finding Family, which was a finalist for the Bakeless Literary Prize and the 2020 Minnesota Book Awards. She teaches in Augsburg University’s low-residency MFA program and also creates and designs websites for writers, artists, and other creatives. She lives with her family in the very literary city of Minneapolis. What If a Fish is her first middle-grade novel.