ONCE UPON A DARKNESS by Aria Kane … cover reveal! 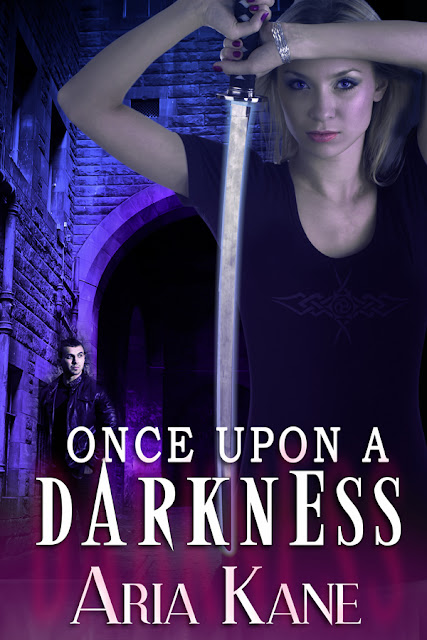 Once Upon a Darknessby Aria Kane will be available from Entranced Publishing June 17!
Gretchen and her twin brother, Hank, were abandoned to a zombie horde when they were five years old. Intended to be a sacrifice by their zealot parents, they were instead rescued by The Company. Raised to become soldiers in the war against zombies, they now provide safe passage through danger zones, one contract at a time.
Clint’s only skill is war, but he’s weary of killing other men. When his contract with the Marines runs out, he takes a job on Gretchen’s team, hoping that the search-and-rescue life will suit him better.

On Clint’s second day, their four-man team is attacked, drugged, and taken to a prison full of frightened civilians. The only way in or out is by helicopter and, here, their enemies are human. One by one, the captives are culled from the holding area.  Rumors say the facility director uses the prisoners as experimental subjects for the testing of a zombie cure.

When Hank is taken, Clint and Gretchen must put aside their personal feelings and find a way out of the prison, surrounded by thousands of starving zombies, before Hank becomes just one more disposable guinea pig in the hands of a twisted mad woman.
Add Once Upon a Darkness on Goodreads!
About the Author
Aria Kane is a recovering mechanical engineer and romance writer. She lives in sunny Florida with a 60 lb mutt who thinks he’s a Chihuahua. You can learn more about her at ariakane.com or on Twitter @aria_kane.
Giveaway
To celebrate the Once Upon a Darknesscover reveal, Aria is giving away a $20 giftcard and an ecopy of an Entranced book of the winner’s choice.
a Rafflecopter giveaway