THE MELODY OF US by Julia Bade … new cover! 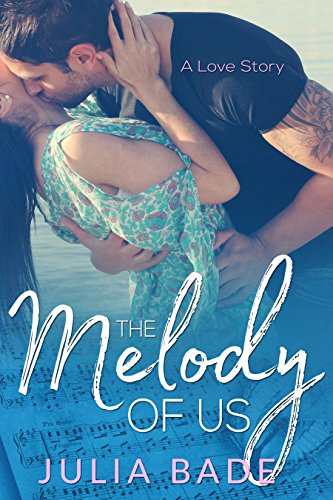 Lexy would never tread on the bonds of brotherhood. At least, not intentionally.

Lexy was a promising musician forced to let go of her dreams, find a job, and survive on her own. Now, she is just hoping to survive the love triangle she stumbled into with two brothers… Simon and Max Hyatt.

Simon was Lexy’s world. He had tapped into her very soul, kept her secrets, and loved her deeply. After pledging his love and promising to marry her, his parents died in a horrific accident and Simon had disappeared. And now he’s back, but even in the vaguely familiar, they’ve become strangers.

Max, Simon’s charming and well-meaning older brother, decides to play cupid. He just wants his brother to find the happiness he deserves. Big Mistake. As Max spends more time with Lexy, they get closer. She helps him through his demons and breaks down his walls. But the harder Max pushes Lexy onto Simon, where he believes she belongs, the stronger their own chemistry builds against the boundaries Max has reluctantly set.

But Lexy is no one’s fool. She knows exactly what she wants in life, and it doesn’t include a love triangle between brothers, only Lexy can’t deny everything wonderful she had with Simon, and she also can’t ignore everything she’s creating with Max. And then comes the announcement that Max is to be deployed, setting off a series of life-changing events. Time is running out. Lexy’s heart has reluctantly chosen one, but she could never tread on the bonds of brotherhood. At least not intentionally.

Julia Bade loves LOVE! She is a busy wife and mom in Texas whose guilty pleasure is writing romance stories during her alone time at three in the morning! A mom of a kindergartner, 3-year-old twins, a 17 and 20 year-old, she loves going a hundred miles an hour. She had no idea that her time as a college cheerleader was really training for her life that was to come!
Julia loves to write about people in love and the challenges that make it all worth the fight.

Her husband is her soul mate and best friend, and she is indebted to him for all the nights he’s had to sleep with the glow of her laptop screen blasting him in the face just so they could be near each other.

Julia is a member of Savvy Authors, a freelance journalist, an English professor, and a former newspaper journalist.