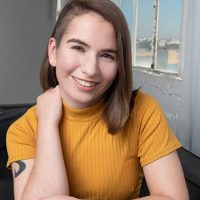 Justine Pucella Winans is a queer and nonbinary writer who resides in Los Angeles with their husband and orange tabby cat. They graduated with a B.F.A in Acting from Chapman University and now work at a talent agency. Originally from Cleveland, they still say “pop” and have love for the city, just not the cold. When not writing, they try their best at Brazilian Jiu-Jitsu, read an alarming amount of manga, and try to make pasta even a fourth as good as their nonna’s.

TITLE is a Young Adult Contemporary Fantasy novel complete at 92,000 words. This plot-driven story holds a strong character-arc [This is a little vague, as most books should have a strong character arc! What specifically is interesting about the characters, or what other genre conventions can be highlighted here?] and sibling rivalry. It compares to titles A Darker Shade of Magic and Ninth House by mixing a complex magic system with mysterious murders.

After Mitchel [This is our introduction to the character, so try to give a little bit more here. Whether it is “seventeen-year-old aspiring warlock” or “voracious cookie-eater and part-time wizard”. Introducing the protagonist with a quick but engaging detail will make us more interested in them!] loses his noble father to the rapacious Siphons [Similar thing here, if not for the following lines, I would assume this is character’s name. Include a detail about who the Siphons are, since we don’t know anything about this world yet!], his father’s magic transfers to him, giving the Siphons a new target to hunt. The Siphons recruit heavily and rebel for being low-powered. [I’m a bit confused with this sentence. Are you saying that they do a lot of recruiting and rebelling despite being low-powered? I’m also a bit confused because they seem like a pretty big threat!] They steal magic as their primary weapon, and they put a bounty on Mitchel for his life and magic unless he joins them. [Why would they want him to join them when they straight up killed his father? Wouldn’t they just kill Mitchel for his magic too?] Still adapting to his new magic, Mitchel barely escapes them. [This story is so compelling so far, but the difficulty with fantasy queries is you really need to get some of the worldbuilding down in a short amount of time. Those character details will really help, but it also might be useful to open up with a bit about the world we are in. Is this present day but with magic? Especially since the genre is Contemporary Fantasy, I’m instantly trying to find the details of where we are since this opening could just as easily be high fantasy. Specifics can really be key in query letters! Also, sometimes telling can go a long way. Like if you need to set the scene with “In a present day world with a fantastical twist, those with magic abilities are hunted for their powers and their lives” etc, it can immediately get the reader oriented as to what is going on.]

He clutches to his only salvation—a letter his father left him with the name of a woman known to protect the hunted: Velmirra Delphique. Until he can find her, Mitchel seeks refuge by hiding in the secret magical world sealed off by hidden entrances around the city [What city? Does this take place in a real city but has a secret magical world? That sounds awesome! Or is it a fantasy city that also has a secret magical world? Also cool! But some specifics here would really help!]. He befriends others of his kind who help him search for Velmirra. But terror strikes again when Siphons attack his new friends, leaving no place safe for Mitchel but also a clue of who might be behind all this. [This wording is also a bit vague. What is the clue? What are they behind? Is this the person in charge of The Siphons? It is hard to know what all this implies!] He must decide whether to join the relentless Siphons to avoid death or trust his father’s letter and continue searching for the elusive Velmirra Delphique who holds many secrets. [I think there can be some more clarity with the stakes here! From the beginning of this paragraph, I thought that Mitchel was already going after Velmirra, so I don’t understand why that is still a decision to make. If anything, based on the way the query was written, I would assume he needs to find Velmirra before the Siphons kill him.]

I’m a Canadian writer from Montreal with a business degree in Marketing, working on creative and analytical projects. In my spare time, I review books and connect with other writers and readers on my social channels.

Thank you for your time and consideration. [This is such an excellent start for a query! The story set-up is very compelling! My biggest overarching note is to get specific about details. I know you can’t go on too much with length limitations on queries, but try to focus in enough of Mitchel, what he wants, what his main obstacle is, and what the main stakes are, so you can get specific in details and leave the reader with more intrigue and not too many general questions!]

Mom could die any minute. [This is a very interesting way to open the book. However, I feel like it sets up a tension that we don’t really get in the rest of the sample. Maybe a bit of a tension break could help in explaining the situation more to make a smoother transition.]

Straining his ears, Mitchel listened for the anticipated thump, hoping it wouldn’t come. If Mom fainted again, he’d have to take her back to the doctor. But her symptoms didn’t explain the doors randomly swinging open. The flickering lights. The ghostly sounds. Something else was going on. [This is also interesting because we get a bit of a paranormal set up but nothing that immediately follows. It might be fine if there are more hints of this later in the opening chapter!]

He needed to cook quickly. Not that food would prevent her attacks, but it couldn’t hurt. Four mouths to feed this morning and only two hands to prepare it all. [This feels like something that they go through all the time—is it different for her this time, or could she literally always almost die?] For an hour, he slaved over the stove, cooking breakfast in the kitchen[,] spacious like a coffin. He missed his father’s fluffy pancakes. His own thin pancakes reminded him of who he was now, an eighteen-year-old fatherless son running a household [I feel like you can cut fatherless son here, as we can infer that based on him missing his father’s cooking and having to run the household].

His stringy blond hair fell over his face as he lifted a [adding an adjective here might help remind us that it is a pancake, just to avoid initial confusion while reading the sentence] circle with the spatula and flipped it into the air. Even [Can cut “even”] by a stroke of luck, breakfast would be edible, but his two siblings still wouldn’t appreciate it. They’ll cram their big mouths, muffling their stupid stories[,] then leave a mess behind them.

But today, it was all worth it.

Mitchel’s thin lips spread into a smile. This was why he was the Beckett household chef. Maid. Shopper. Therapist. There wasn’t anything he wouldn’t do for his mother.

“Happy birthday, Mom,” he said, turning around, about to kiss her strawberry-blond head. But his heart slumped as she walked towards him, hunched like a wilting rose, her head bobbing, not yet recovered from yesterday’s episode. [I love how the opening really gets into Mitchel’s character and hardworking but loving nature in such a short amount of time. I do wonder if some of the paranormal hints can sway more toward hints of magic, but this is a wonderful opening that shows a bit of the normal home life while still developing character backstory. Great job!]

Thank you, Justine, for the critique! We are showcasing three mentor critiques each day leading up to the Pitch Wars 2021 submission window, so make sure to read the other two critiques for today and come back tomorrow for more.