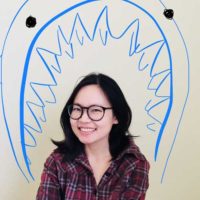 Remy Lai writes and draws stories for kids. PIE IN THE SKY (Henry Holt/ Macmillan), a prose-graphic novel hybrid, is her first middle grade novel and it garnered five starred trade reviews. Her second middle grade novel, FLY ON THE WALL (also with Henry Holt), will be released in May 2020.

A poignant, laugh-out-loud illustrated middle-grade novel about an eleven-year-old boy’s immigration experience, his annoying little brother, and their cake-baking hijinks! 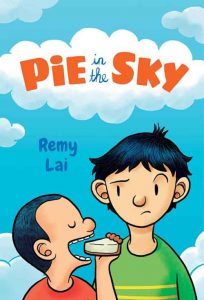 Sometimes life isn’t a piece of cake . . . When Jingwen moves to a new country, he feels like he’s landed on Mars. School is torture, making friends is impossible since he doesn’t speak English, and he’s often stuck looking after his (extremely irritating) little brother, Yanghao. To distract himself from the loneliness, Jingwen daydreams about making all the cakes on the menu of Pie in the Sky, the bakery his father had planned to open before he unexpectedly passed away. The only problem is his mother has laid down one major rule: the brothers are not to use the oven while she’s at work. As Jingwen and Yanghao bake elaborate cakes, they’ll have to cook up elaborate excuses to keep the cake making a secret from Mama. In her hilarious, moving middle-grade debut, Remy Lai delivers a scrumptious combination of vibrant graphic art and pitch-perfect writing that will appeal to fans of Shannon Hale and LeUyen Pham’s Real Friends, Kelly Yang’s Front Desk, and Jerry Craft’s New Kid.

For some reason I wasn’t allowed to leave. [This first line might be stronger, more intriguing, if we remove “For some reason.”] The sleeping bag on my bunk was dirty. I spent my days wandering around the edge of the lake, throwing rocks to make the surface ripple. [I wasn’t sure about the connection between the dirty sleeping bag and the wandering around the edge of the lake etc. Are you saying that those activities make his sleeping bag dirty and that the MC doesn’t take showers? Maybe think about replacing the previous 2 sentences with something that indicates how long this MC has been in the camp, a sentence that will nicely segue with your next one about the other campers never staying long.] The other campers never stayed long. They’d arrive at check in, meet the quacks in the big white building at the top of the hill, then pack up and go home. After a while I noticed a pattern. Usually the worst kids stayed the longest. [ 🡨 I think this makes an EXCELLENT end to this paragraph, so maybe we could insert a paragraph break here.] Hack the school computer to change your grades and you’re out the same afternoon. Push an old lady off the curb and you might pull an all-nighter. One guy who liked squeezing Superglue into the credit card slots at gas pumps got a whole week.

My problem was that I made up stories, which didn’t even seem criminal.

So what was it about me?

[The MC states that their problem is that they make up stories, and since that statement comes after the other “crimes” the other bad kids did to be detained longer at the camp, I thought that the MC is stating that their making up stories is what made them be detained, I was then confused when the MC went on and said “What was it about me?” Maybe move “So what was it about me?” to the line before the making up stories—that way, we know that the MC isn’t sure why the MC is detained, and the MC guesses that maaaaybe making up stories was their crime, but that didn’t seem criminal. ]

The Top Quack  [ha!] hit the voice memo record button, pushed his phone across the desk, and smiled. “Let’s try again,” he said. “For the record, please state your name, age, and original infraction.”

I kept going. “That’s why you’re keeping me here.” [Ah, I see. She actually knows why she’s detained here. I’d rework the paragrahs about making up stories and “what was it about me?” because I thought that she genuinely did not know. It’s very interesting that she knows.]

Finally, he set the phone down again, hit record, and said, “We’re very interested in you, Erica. We’re still searching for answers.”

Thank you, Remy, for the critique! We are showcasing three mentor critiques each day leading up to the Pitch Wars 2019 submission window, so make sure to read the other two critiques for today and come back tomorrow for more.