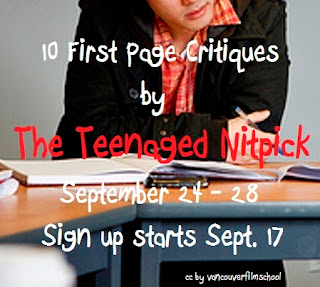 Biology class, the nucleus of boredom. [Ha! I like this, but it doesn’t work as an opening. It feels more like a location label than an opening sentence. Maybe, instead, say something like: “Whoever called biology class a ‘nucleus of boredom’ is my hero.” Something like this adds nice voice into the equation, too.]
Rachael stared four rows over and one row up at her friend Katie, but couldn’t get her attention. Katie was writing super-fast in her notebook, probably composing a letter about global warming to the president or something. Whatever she was doing, she was totally into it, pulling a curl around her index finger so tightly that Rachael worried she’d break the pinkish strands. Unless Rachael stood on her head naked and yelled out Katie’s name, there was no way she could pull her out of her Katie bubble. [Honestly, I prefer for friends to be introduced with action or dialogue to show what the friend is like, not just by telling. But that’s just me.]
Rachael sighed. No Katie distraction today.
Primordial ooze?  [Awkward transition. You never had the teacher say anything, and suddenly you skip to it.] Rachael blinked and sat up straighter. What did Mr. Williams just say? She looked around, but no one else seemed the slightest bit confused. [Um, this doesn’t usually happen. There are ALWAYS multiple people zoning out in class. ;-)] That’s [Eeek. Shifting tenses. I think you mean “that was.”] what she got for zoning out in the middle of biology. Now Mr. Williams was on some tangent about ooze and Rachael didn’t even know why. It’d probably be on the next test, and then she’d totally be screwed. [Voice! Yes!]
As though he could read her thoughts, Mr. Williams pounced. [I don’t think “pounced” is the word you’re looking for. Maybe just say “turned to Rachael”?] “Rachael. Please summarize the theory that human life evolved from primordial soup.” [Teachers, at least in my experience, don’t often ask you to summarize something. They’ll ask more specific questions on the topic. But yes, that is major nitpicking.]
Rachael’s eyes widened. “Uh… it’s the idea that humans came out of primordial soup?” [I can’t imagine anyone saying “primordial.”]
The girl next to her snorted and whispered, “Chicken noodle soup, right?”  [Feels unrealistic. I’d cut it.]
“Rachael, were you even listening? This is important. It’s the key to all human life.” Mr. Williams shook his head.
She nodded solemnly, as if Yeah, like biology was the most important thing ever invented.
Okay, get ready for some tough love.
…Ready?
So, this has potential, but I think you started in the wrong place. I’d cut all of it. Opening a book while the main character is in class is pretty cliché as is, and the only way I think it works is if something totally weird happens. Say, a SWAT team rushes in. But that doesn’t happen here, and the whole scene doesn’t accomplish much. I’d rather you to start with a hook. This doesn’t necessarily mean action; strong voices, great writing, or witty dialogue hooks me. Maybe you can start with that first line, then open it after class? Or something? Again, I think it has potential, but I think you need to start it in a more interesting spot. Good luck!