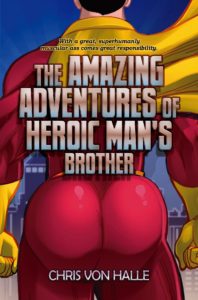 Norm “Run-of-the-Mill” Stevens has always lived in the shadow of his older brother, Tom, publicly known as Heroic Man, The Intrepid Heroic Man, The Gallant Heroic Man, among other names. The crime-fighting superhero possesses the full spectrum of superhuman powers—super strength, speed, flight, and, of course, that truly sublime, superhumanly muscular ass of his, which has become an icon of an adoring city.

Meanwhile, Norm’s genius goes entirely unnoticed, so he decides to become his own crime-fighting superhero to gain acclaim. Trouble is, he’s about as physically frail as a crumpled cardboard box manufactured with especially feeble paper. Will he make a total fool of himself? Will he get horribly hurt or even die at the hands of the city’s petty criminals? And most importantly, just how truly sublime is that superhumanly muscular rear of Heroic Man’s? 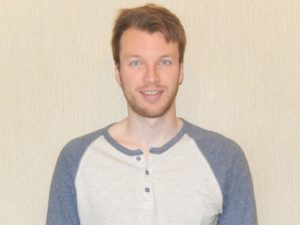 Chris von Halle is pretty sure he has superhuman powers, if only he could discover and untap them. Until he does, he’ll just have to be satisfied with living in Ridgewood, New Jersey, engaging in such extraordinary activities as watching tennis and basketball, playing video games, and trying to improve his already sublimely muscular rear, if he says so himself.