I’m so excited about my critique partner’s book birthday and it couldn’t happen to kinder person than Shannon Duffy. Her heart is so beautiful and she’s such a talented writer, I hope you all will support her book. I’m giving away 5 copies of Shannon Duffy’s Spectral to celebrate. And to make it even sweeter, one of the five winners will receive a Spectral swag package from Shannon Duffy, which includes a t-shirt, a pen, a book mark, romance trading cards, and a few butterfly tattoos. 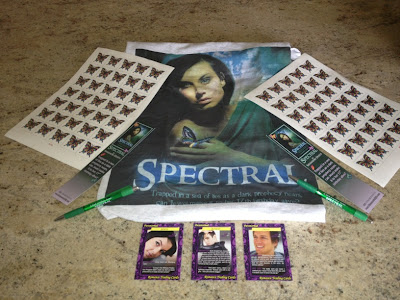 From the moment I read Spectral, I fell in the love with the characters. Jewel’s been in the witness protection program all her life. She’s tough, but we get to see her soft side through the love she has for her young brother and her loyalty to her family. I have to admit that I was at first Team Chase, the hot boy at her new school with a kind heart. He came on the scene with his boy-next-door charms and sweetness and I was hooked. But I soon switched teams when the dark, mysterious Roman entered the scene. He smelled of bad boy from the beginning and I’m a sucker for that type. I immediately fell for his smoldering Italian, his strength, and his smooth moves. Shannon had me questioning his motives while yearning for the two to get together. Loved that!

The plot is filled with action, twists, betrayal, and witch craft. What else would you want in a paranormal romance? An endearing romance? Yeah, it has that too! So get the book and go along with Jewel on her journey to self discovery and to finding her soul mate. You’ll be glad you did! 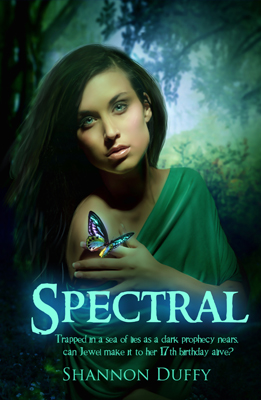 Spectral Summary:
Convinced she’s a part of the witness protection program, sixteen-year-old Jewel Rose is shuffled around the globe with her family like a pack of traveling gypsies. After arriving at lucky home twenty-seven, she stumbles upon a mysterious boy with magical powers claiming to be her guardian . . . and warning of imminent danger. Despite the obvious sparks between them, Jewel discovers a relationship is forbidden, and the more she learns about dark, brooding Roman, she begins to question who she can even believe — the family who raised her, or the supposed sworn protector who claims they’ve been lying to her all along.

As she struggles to uncover who her family has really been running from, she is forced to hide her birthmark that reveals who she is. With new realities surfacing, unexplained powers appearing, and two tempting boys vying for her heart, Jewel battles to learn who she can trust in an ever growing sea of lies, hoping she’ll make it through her seventeenth birthday alive.

Shannon Duffy writes young adult and middle grade fiction. She grew up on the beautiful east coast of Canada and now lives in Ontario, Canada. She is the mom of one boy, Gabriel, her angel. She loves writing, reading, working out, soccer, and the sport of champions-shopping. She is the author of the young adult paranormal romance, SPECTRAL. Her upcoming middle grade fantasy novel, GABRIEL STONE AND THE DIVINITY OF VALTA is scheduled for a January 2013 release.

Winners please email me at brendadrakecontests@gmail.com and let me know which format you’d like for SPECTRAL. And Rachel Schieffelbein please email you addy so I can mail the swag to you. Congratulations!