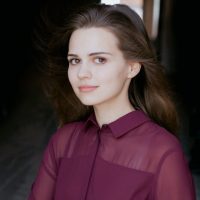 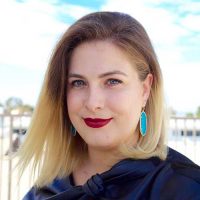 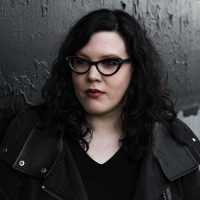 Halley and Layne, why did you choose Olesya?

Halley: Olesya’s writing popped off the page from the get go—about halfway through her first page, I knew I wanted to read everything she’d ever written. Ginny Dugan is also exactly the kind of character I like to read—feminist, sharp, flawed, in other words: real. I can just see this book on the shelf, a whole series of Ginny Dugan titles. Watch out world!

Layne: Yes, I was blown away by Olesya’s talent from the first line—I couldn’t believe an agent hadn’t already snapped her up! But Halley and I also had a clear vision for how we could make this incredible book even stronger. I too eagerly await Ginny Dugan World Domination!

I’m watching and can’t wait to see how it does! And  Olesya, why did you choose to submit to Halley and Layne?

From the moment I read Halley and Layne’s list, I knew I had to submit to them. Smashing the patriarchy, an escapist setting, a career-centric narrative, and women committing violence? My manuscript ticked all these boxes, but even more importantly, these are elements I’ve always loved as a reader, which made it clear to me that we would click, both on a personal and professional level.

Layne and Halley are incredibly skilled in areas that need improvement in my story. When I submitted to Pitch Wars, I had just read Layne’s debut, TEMPER, and I couldn’t stop thinking about it for days. She’s a master at crafting propulsive narratives with deliciously morally gray characters, and I was so excited to learn from her. I also really enjoyed her podcast, Unlikeable Female Characters, and the way it called out the pressure on fictional women to always be ‘likeable’ (from a man’s perspective…).

When I submitted, I had also read the opening to Halley’s debut, THE LADY UPSTAIRS. Her combination of lush, immersive imagery with a sharp undercurrent of darkness took my breath away. Her feminist noir subverts classic tropes with style and wit, which is something I aspire towards in my writing as well.

I love it! We definitely need feminist positive books. So, Halley and Layne, summarize Olesya’s book in 3 words.

Olesya, summarize your book in 3 words.

Love the word choices, and I’m intrigued by a flapper noir! Now, Halley and Layne, tell us about yourselves. Something we may not already know.

Halley: Well, I’m a writer, previous Pitch Wars mentee and mentor, and my Pitch Wars book, THE LADY UPSTAIRS, was published in 2020. Before the pandemic, I had just joined a skee ball league and I miss it very very much. One day, I’ll rule the lanes again!

Layne: Not sure I can beat skee ball, but let’s see… even though I write dark and murder-y books, some of my favorite books to read are romance novels. Especially during the pandemic, reading romance has been the perfect escape—plus romance authors are absolute queens of character development and microtension, so I learn a lot of writing craft tricks too. One of my favorite romance novels of the past year was THE ROOMMATE by fellow Pitch Warrior Rosie Danan—I highly recommend it!

Skee ball is a tough one to beat, but I hear you on reading romance during the pandemic. The escape is so needed. Back to Olesya. What do you hope to get out of the Pitch Wars experience?

When I submitted to Pitch Wars, I knew there was still a gap between my manuscript and my ultimate vision. I had reached a plateau in terms of what I could achieve on my own, and I realized it would take me a lot of time and frustration polishing my manuscript without some assistance. Pitch Wars offers a bootcamp-style environment, with professional help that cuts straight to the source of the problem and deadlines to keep me focused on revisions. I’ve already learned so much from Halley and Layne, from tightening my plot based on Save the Cat! beat sheets to amping up the tension in each chapter. They’re truly a dream team to work with, and I’m enjoying every part of this process.

This is exactly why I founded Pitch Wars. When we’re so close to our work, it can be hard to pinpoint our weaknesses. Olesya, tell us about yourself. What makes you and your manuscript unique?

My native language is Russian, but my family emigrated to Canada when I was young, which is where I fell in love with the English language. I’ve been writing since elementary school (my first story was about a girl detective, so not much has changed). When we moved back to Moscow, writing became a way to hold onto the Canadian part of my identity. I think my bilingualism gives me a unique perspective on the two cultures that defined my upbringing, something I notice both in my day job as a translator and in my creative writing.

My novel follows Ginny Dugan, an advice columnist in 1920s New York who investigates the disappearance of a Harlem torch singer. While she initially takes the case to prove herself as an investigative journalist, it soon turns personal as she’s forced to confront the dark side of the glamorous world she admires.

I’ve always been interested in the 1920s, and I wanted to bring out the similarities with today’s culture as we enter the 2020s: celebrity culture, advertising, the emergence of tabloids vs. today’s clickbait headlines, and, unfortunately, the unfair stereotyping of certain groups of the population. I also love noir, and I was inspired by writers like Halley Sutton, Sara Gran, and Megan Abbott to try a new spin on the genre – with a different era and a female protagonist who will stop at nothing to achieve her goals.

An advice columnist in the 1920s? I’m sold! Thank you Halley, Layne, and Olesya for the interview! 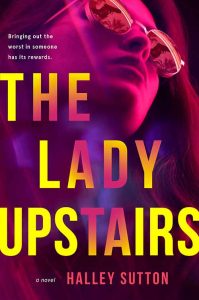 A modern-day noir featuring a twisty cat-and-mouse chase, this dark debut thriller tells the story of a woman who makes a living taking down terrible men…then finds herself in over her head and with blood on her hands. The only way out? Pull off one final con.

Jo’s job is blackmailing the most lecherous men in Los Angeles–handsy Hollywood producers, adulterous actors, corrupt cops. Sure, she likes the money she’s making, which comes in handy for the debt she is paying off, but it’s also a chance to take back power for the women of the city. Eager to prove herself to her coworker Lou and their enigmatic boss, known only as the Lady Upstairs, Jo takes on bigger and riskier jobs.

When one of her targets is murdered, both the Lady Upstairs and the LAPD have Jo in their sights. Desperate to escape the consequences of her failed job, she decides to take on just one more sting–bringing down a rising political star. It’s her biggest con yet–and she will do it behind the Lady’s back, freeing both herself and Lou. But Jo soon learns that Lou and the Lady have secrets of their own, and that no woman is safe when there is a life-changing payout on the line.

A delicious debut thriller crackling with wit and an unforgettable feminist voice, The Lady Upstairs is a chilling and endlessly surprising take on female revenge. 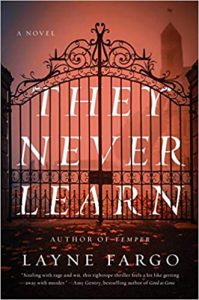 From the author of the “raw, ingenious, and utterly fearless” (Wendy Walker, USA TODAYbestselling author) Temper comes a dynamic psychological thriller about two women who give bad men exactly what they deserve.

Scarlett Clark is an exceptional English professor. But she’s even better at getting away with murder.

Every year, she searches for the worst man at Gorman University and plots his well-deserved demise. Thanks to her meticulous planning, she’s avoided drawing attention to herself—but as she’s preparing for her biggest kill yet, the school starts probing into the growing body count on campus. Determined to keep her enemies close, Scarlett insinuates herself into the investigation and charms the woman in charge, Dr. Mina Pierce. Everything’s going according to her master plan…until she loses control with her latest victim, putting her secret life at risk of exposure.

Meanwhile, Gorman student Carly Schiller is just trying to survive her freshman year. Finally free of her emotionally abusive father, all Carly wants is to focus on her studies and fade into the background. Her new roommate has other ideas. Allison Hadley is cool and confident—everything Carly wishes she could be—and the two girls quickly form an intense friendship. So when Allison is sexually assaulted at a party, Carly becomes obsessed with making the attacker pay…and turning her fantasies about revenge into a reality.