Rebecca: Why did you choose Abby & Gail?
Reading their blogs, I liked their sense of humor as well as some of the favorite books they mentioned. I felt like they would be great to work with and a good team to help me with my manuscript.

Mentors: Why did you choose Rebecca and HOLE IN THE ROCK?
Abby: It made me laugh (a lot!) and the MG voice was totally spot-on.
Gail: The humor for sure, the main character’s voice, and the vivid setting. I’m in love with the setting, which is an actual roadside attraction in the desert.

Rebecca: Tell us about yourself. What makes you and your MS unique?
For starters, I’m a speech pathologist, and in my writing I find that kids with various types of disabilities tend to show up in my books as secondary and sometimes main characters. I guess that’s natural since I’ve worked for eighteen years and counting with kids who have communication disorders. As far as my manuscript goes, I first got the idea for a story involving taxidermy when I saw a coffee table book at a local store entitled “Crappy Taxidermy.” It had hilarious photos of taxidermy projects gone horribly awry, and it got me to thinking about how I could include taxidermy in one of my novels. That coincided with a trip to visit family where we happened to be driving in Southern Utah along highway 191 and came across a place called “Hole N’ the Rock,” and decided to check it out. It had everything: a cave house dug into a huge red rock, tacky souvenirs, taxidermied animals, ice cream cones, weird metal sculptures, and a zoo. It was reality at its most weirdly awesome, and totally something I wanted to put into a book one day. Pretty soon my draft of “Hole in the Rock” was taking shape.

Mentors: Tell us about yourself. Something we might not already know.
Abby: I’m a big animal lover! I can definitely relate to the main character of Rebecca’s book, and I bet a lot of tweens will, too.
Gail: I’m obsessed with road trips, especially those that go to places completely different from where I live. I’m already planning my trip to Moab and Hole N’ the Rock.

Check out this team’s latest releases . . .

Rosemary is fifteen and gloriously free, on her own for the very first time. Part of an exchange program for aspiring artists, she arrives in sunny southern France with a single goal: she doesn’t plan to leave, ever. She wants a new life, a new family, and a new identity. But her situation, crafted from lies big and small, is precarious.

Desperate to escape haunting images from her past and a stage one helicopter parent, Rosemary struggles to hide her lack of artistic talent and a communication disorder that has tormented her all her life. She believes her dream of a new start will come true, until she unwittingly finds herself enveloped in a decades-old mystery that threatens to ruin her only chance for success. Determined to stay, Rosemary must choose whether or not she’ll tell the biggest lie of all, even if it means destroying the life of someone she cares about.

Dramatic, heartwarming, and full of teenage angst, The French Impressionist perfectly captures the struggle of those who feel they have no voice, and also shows the courage it takes to speak up and show the world who we really are.
“A deeply unsettling portrait of love, psychological abuse, and the hell of good intentions.” – Kirkus Reviews

Ever since she was a baby, the words people use to describe Elyse have instantly appeared on her arms and legs. At first it was just “cute” and “adorable,” but as she’s gotten older and kids have gotten meaner, words like “loser” and “pathetic” appear, and those words bubble up and itch. And then there are words like “interesting,” which she’s not really sure how to feel about. Now she’s starting middle school, and just as her friends who used to accept and protect her are drifting away, and she’s been dumped by her very first boyfriend, and worst of all, the words she thinks about herself are starting to appear, she receives an anonymous note saying, “I know who you are, and I know what you’re dealing with. I want to help.” As Elyse works to solve the mystery of who has sent her this note, she also finds new ways to accept who she is and to become her best self.

“Elyse’s struggles toward self-confidence will resonate with fans of R.J. Palacio’sWonder (2012) and all readers learning how to be comfortable in their own skins.”
– Kirkus starred review! 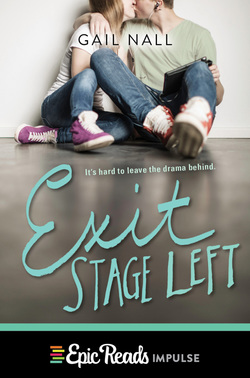 In this funny and sweet novel, perfect for fans of Fame, Casey works to find a new passion after her dreams of becoming a Broadway star are ruined.

Casey Fitzgerald has always been an actress. She’s known it was her destiny ever since she snagged the role of “apple” in her kindergarten’s production of The Food Pyramid. But when she doesn’t get the lead in her performing arts high school’s production of The Sound of Music, she begins to question everything. Not getting the lead means no recommendations, and no recommendations means she can kiss good bye any chance of getting a scholarship to the prestigious New York College of Performing Arts.

After some soul searching and some wise words from her friend Harrison, Casey decides to totally reinvent herself. She’s already ditched her on-again off-again boyfriend Trevor and is interested in the new boy at school, so why not start fresh with everything? But every new destiny she tries doesn’t seem quite right. And when her best friend, Amanda, who did get the lead, starts hanging out with Trevor, Casey’s not sure if she’ll ever be able to leave the drama behind.