Alexa, why did you choose Kara Leigh Miller & Meredith Ireland?

I chose them for so many reasons. I really loved the idea of working with a team and after I read their wish list, I knew I had to take a chance. It really spoke to me that diversity was something they really wanted. As a devout romance reader, it is hard to come across a POC as the main character and is honestly one of the reasons I began writing this story. Not to mention, they are both writing rock stars, so smart, and moms to top it all off. I felt like if I could work with them, I would not only learn a ton, but really have fun and enjoy it. I was right.

Kara and Meredith, why did you choose Alexa Martin / #Intercepted?

Kara: Her voice! It jumps off the page and smacks you across the face. During my initial read through, I was simultaneously laughing and blushing, which can be a very uncomfortable thing when you’re sitting in the living room with your husband and kids nearby. Alexa is a ton of fun, and during our initial communications, she was very open, honest, and genuine. We hit it right off. She’s like the missing wheel of our tricycle—She completes us 😉

Meredith: I second everything Kara said above. Additionally, I was hoping to find a fantastic #Ownvoices/diverse manuscript and Alexa delivered that with an interracial love story and a main character whose sparkling voice stood out amongst the rest. It was so funny I woke my husband laughing.

Kara and Meredith, summarize your mentee’s book in three words.

Alexa, tell us about yourself. What makes you and your MS unique?

I am a 29-year-old Denver native, mother of four, and wife to one. My husband and I met in high school and have been navigating this crazy life together ever since. I started writing after my daughter was born and we were living in Green Bay, Wisconsin while my husband played for the Packers. I started a blog to update my family back home about what was going on and as something to keep my mind occupied. I never thought of myself as a writer, but as time went on, I knew it was something that I really loved. Writing a book was never on my radar… until it was on my radar. I went on a vacation with my husband, an idea popped in my head, and that was it. I went home, started writing, and I haven’t been able to stop.

#INTERCEPTED is Real Housewives meets Any Given Sunday where the behind the scenes interactions between the wives and the girlfriends is just as relevant as the action on the field—Although none of it is as hot as the action in the bedroom, especially when new quarterback Gavin joins the team. It’s funny and sexy with a hint of suspense and has diversity that actually reflects the sports world.

Kara and Meredith, tell us about yourself. Something we might not already know.

Kara: I’m a wife, mom to 5 kids, 3 pit bulls, and 2 cats, obsessive Netflix binger, and horror movie fanatic. I’ve been writing for a little over four years, and signed with my agent—Dawn Dowdle of Blue Ridge Literary Agency—two years ago. We (finally) sold a series to Entangled Embrace, which will be released later this year under the pen name Lexi Lawton. It’s a fun, steamy contemporary new adult series with each book following one of the Collins brothers.

Something you don’t already know about me… When I was younger, I had a terrible phobia about eating in front of people I didn’t know. It made sleepovers and birthday parties very awkward. Lol. It’s not as paralyzing now as it used to be, but I’m very self-conscious when eating in front of new people. I swear I’m not a pig, and I do have table manners!

Meredith: I’ve been in the same wonderful interracial relationship for ten years. I put whipped cream in my coffee every day and often when writing I will listen to the same few songs on repeat. Huge football fan, mainly college ACC. I can’t juggle or jump rope (just can’t, it doesn’t work), but I can deadlift 1.5xs of my weight. Speaking of phobias, I’m afraid of birds—don’t ask. 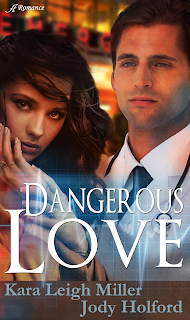 Doctor Josh Parker lives with guilt about his wife’s death every day. He believes himself incapable of ever loving again, but when a mysterious woman arrives in the Emergency Room, brutally beaten and left for dead, he starts to feel something he hasn’t felt in far too long: hope.

Alessandra Matthews has no memory of the events that led to her being hospitalized. Worse, she has no idea who hurt her or why. Although she’s uncertain of who she is, she is fully aware of one thing — she’s falling for her doctor.

Sometimes, what you don’t know can kill you…

As Josh and Alessa work to solve the mystery surrounding her past, she soon realizes just how much danger she’s really in, but Josh refuses to let her face the darkness of her memories alone. With each of them struggling to put their pasts behind them, theirs is a DANGEROUS LOVE.