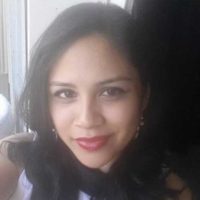 Congratulations to Pitch Wars mentor, Mia Manansala for winning the Eleanor Taylor Bland Crime Fiction Writers of Color Award for 2018! We’re thrilled we had a chance to talk with Mia about the award and what she’s working on.

Tell us about the manuscript that the Sisters in Crime said was a unanimous choice.

The manuscript that won the Eleanor Taylor Bland Award is a Filipino-themed culinary cozy. Cozies are a subgenre of crime fiction, where sex and violence happens offscreen (or not at all) and the setting focuses on a small, tight-knit community. My main character is a young Filipino woman who has to leave the big city and return to her small town (a fictional one near Chicago) to work at her aunt’s failing Filipino restaurant. And then oh no, dead bodies start showing up. A typical plotline, but I love playing with genre tropes.

What does the award mean to you?

I write the stories I want to read and rarely get to see on the shelves. Winning this award gives me an amazing sense of validation because it shows that I’m not the only one who cares about them. My characters are close to my heart, and for people who don’t know me and have nothing to gain from helping me to champion these characters…is there a better feeling?

Who are your favorite diverse mystery writers?

There are quite a few, but off the top of my head:

Kellye Garrett, and not just because she’s my mentor. In fact, I applied to be her mentee because I loved her debut so much. Fresh, funny, and diverse traditional mysteries? Yeah, that’s kind of my thing.

Kristen Lepionka, another Pitch Wars mentor. Her Roxane Weary series, starring a bisexual female private investigator, is so good that I legit get mad that I have to wait a year for the next one. Like, I get it, writing a book takes time, but I need more Roxane!

Renee James, writer of the Bobbi Logan series about a transwoman who transitioned later in life and has to deal with the murder of her friend and the investigation that ensues. Heavy stuff, but you can’t help but love Bobbi and cheer for/worry about her as she tries to build a new life.

Steph Cha, author of the Juniper Song series starring a Korean-American female sleuth. Asian-American millennial detectives ftw! Her series is darker and heavier than what I write, so I appreciate how different we are in style and tone. Her next book, which I believe is a standalone, sounds INTENSE and I cannot wait for it.

You’re mentoring in Pitch Wars this year. What are your thoughts on the importance of entering contests such as Pitch Wars and Eleanor Taylor Bland Award? Are there other contests you’d recommend other diverse writers enter?

Contests are an excellent opportunity to get your name out there, receive feedback on your work, meet other writers, and in the case of grants and scholarships, get money to better improve your craft. Writing classes and conferences are so expensive, often prohibitively expensive, for young writers and those from marginalized backgrounds. I’d say ~90% of the writing classes, workshops, conferences, etc. that I’ve attended were all paid for using grants and scholarships that I’ve won.

They’re also great for people like me who need an external deadline pushing them to finish. When you’re unpublished, nobody’s waiting for your story. Not really. You can finish (or not) at your leisure. But contests mean you have to finish a certain amount (first twenty pages, full manuscript, whatever) by a specific date, and if you don’t finish, you miss the opportunity.

Two scholarships I’ve recently learned about are The Author Accelerator Diverse Voices Scholarship and the Golden Crown Literary Society scholarships (for those who write lesbian fiction).

You also won a grant with Malice Domestic. Can you tell us about it?

This grant completely changed my life. I truly believe that. Malice Domestic is a convention dedicated to traditional mysteries, and they offer a grant to an unpublished writer in that genre. The manuscript that won the grant was also the manuscript that got me a mentorship with Pitch Wars.

In fact, if it weren’t for winning that grant, I never would’ve heard of Pitch Wars. I went to Malice Domestic to accept the award, and that’s where I met Kellye Garrett. We didn’t have a chance to talk much, but we became friends on social media and I saw her posting about Pitch Wars on Twitter. That pushed me to finish my manuscript (the first story I’ve ever finished) in time to enter, and the rest is history.

What are you working on now?

I’m working on two different stories right now. The first is a murder mystery set in the world of pro wrestling, and it’s the sequel to my Pitch Wars manuscript. The other is the Filipino culinary cozy I mentioned earlier.

At first it was a little confusing working on two projects, but now I love it. Even though both are humorous mysteries, the cozy is much more lighthearted, while the other has a more biting sarcasm and cynicism. Being able to switch back and forth depending on my mood has been very helpful; when I’m blocked on one, I can change to the other and keep writing.

Just wanted to end with this important statement: DIVERSITY IS NOT A TREND.