J. C. Nelson (Mentor), tell us a little about yourself.

I love Fantasy and Sci-Fi. My favorite genre is urban fantasy, but basically anything wild and wonderful. For me, I’d read the phone book if it were written with a wonderful voice and a dragon showed up to devour the entire Q-T range. My writing style depends on what I’m writing. For my first urban fantasy, the Grimm Agency series, it’s a lighter tone which isn’t afraid to be genre savvy or poke fun at conventions. For my next series, The Reburialists, I’m trying to channel the feeling of a swashbuckling action movie like The Mummy or Indianna Jones.

Sean Grigsby, tell us a little about yourself.

I love it all, fiction and nonfiction alike. I lean toward the dark side, but I’m just as at home with a well-written cozy mystery as much as grimdark and horror. Books about writing craft are something I’ll continue to eat up, no matter where my career takes me. I believe you can never stop learning.

J.C.,  why did you decide to participate in Pitch Wars?

I met my agenda, @bookaliciousPam in Pitchwars, and I love helping people tell the best story I can. And the community is amazing.

Sean, why did you decide to participate in Pitch Wars?

The list of agents is amazing. Most of them are closed to queries, so this was an opportunity to get my work in front of them. I also knew I needed help. I think I teamed up with the right mentor. JC can crack a whip and give high fives in the same breath.

J. C., what are you most excited for?

I can’t wait for everyone else to meet RJ (the MC of Sean’s book). How can you not love a guitar playing black man who runs a petty revenge business and collects souls for the devil on the side?

Sean, what are you most excited for?

Improving my manuscript. The agents’ decision to request is out of my hands, but working with JC and doing my darndest to make my novel shine is totally on my shoulders. I’m going to learn a lot.

Sean, describe your novel in 3 words.

I’m Sean Grigsby, a professional firefighter living in central Arkansas with my wife, two-year-old son, and a daughter on the way. I grew up in Memphis, where my novel, Dirty Deeds Done Dirt Cheap is based. Unlike my main character, I wasn’t as successful running a revenge business, and the Devil thinks my humor is too blue. I got my start writing short horror, even having one of my published stories recorded by Mr. Creepy Pasta on YouTube, which I heard is kind of a big deal.

I’m J.C. Nelson. I’m a programmer by day, a writer by night, and a parent 24×7 to four kids. I live in Seattle, but I”m bred and born a Texan, with family all over the lone star state. I kept bees for years, I’ve herded chickens and children, and have a reputation with my neighbors as “the crazy one.”

To find out about all of J.C.’s books go here. 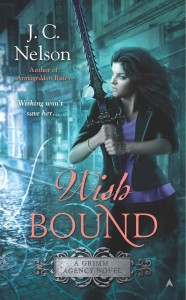 As a partner at Grimm’s magical Agency, Marissa Locks is used to working odd jobs. But when an evil queen reappears in Kingdom, life becomes too strange to handle…

Even when she’s not starting it, trouble follows Marissa everywhere. First there was the incident with the homicidal Fairy Godmother. Then there was the time she accidentally started Armageddon. But the problems that always seem to arise on Marissa’s birthday take the cake.

This year, her annual bad-luck presents include an army of invading goblins, the resurrection of two vengeful enemies from hell, and the return of the Black Queen, the evil sorceress whose reign of terror still haunts Kingdom and who happens to have claimed Marissa as her servant.

As Marissa’s friends try to save her from the Black Queen’s clutches, Marissa fights to end a bitter war that started before her birth. But her quest for peace is about to bring up some inconvenient truths about her own past—ones that might cost her the happily ever after she’s always dreamed of…