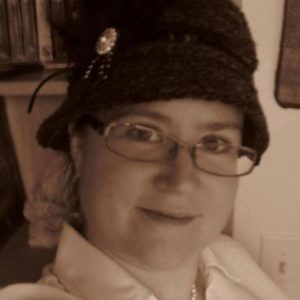 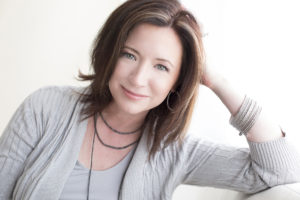 Lisen, why did you choose to submit to Jenna?

Since Stalking Death is a mash-up of two genres, I knew it would be a challenge to find a mentor who would be a good fit. Until I found Jenna. And for the first time in a very long time, I saw a wish list that described my book exactly. Then I stalked—I mean researched—her: I read The Protector Project, interacted with her on Twitter, and snooped around her website. I fangirled. The rest is history.

Jenna, why did you choose Lisen’s manuscript?

Lisen wrote a page-turning thriller with a fantastic main character and ghosts. I wanted to tell everyone I knew about it. Immediately.

Lisen, summarize your book in 3 words.

Lisen, tell us about yourself! What makes you and your MS unique?

I’ve always had an insatiable love of mysteries. Growing up, my neighbor and I would create our own mysteries, hunt for clues, and track down bad guys. I adored the old Nancy Drew books which had been passed down to me and was always on the lookout for a new challenge. Perhaps because of this, the unexplained always fascinated me. Legends, stories of ghosts, and unnatural phenomena were just mysteries that didn’t have concrete answers. *Yet*. Those two loves were part of the reason I ended up doing my Masters work in forensic psychology. STALKING DEATH is a story that bridges my childhood dreams exploring the mysteries of the unexplained and all those late nights studying profiling and crime scenes in grad school into one. It’s a story that won’t let me go!

Jenna, tell us about yourself. Something we may not already know.

A few years ago, my sister and I found a dead body in the woods. 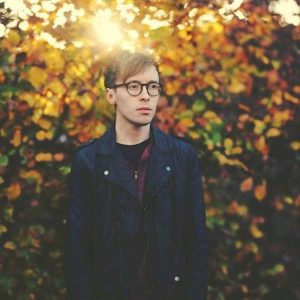 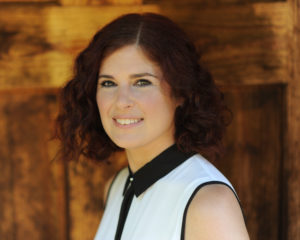 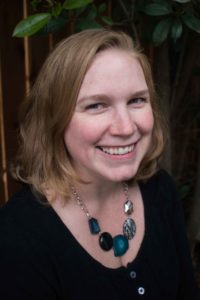 Luke, why did you choose to submit to Helene and Beth?

So, I’ll admit I’m a bit of googling sleuth. I embarked on quite a bit of espionage on all of the four mentors I submitted to, but I will admit that I found more on Helene and Beth (than they even realize). I, for example, knew before I was chosen as their mentee, what their backgrounds were and what kind of books they had written before.

I had learned that Beth was a freelance editor and as a methodical plotter, I got the impression we worked in a similar way – this really appealed to me.

Helene’s work had been featured on numerous threads/blogs for books young readers should try that feature mental health themes positively. I could sit here all day and list the reasons why I fell in love with them, but the thing that eventually tipped me over the edge was that I was part of a Pitch Wars group on Facebook and Twitter. Within this group were topics and tasks each day regarding your MS. I remember one day in particular we had to pitch our book in a single tweet (harder than writing the book itself!) I did so on the Pitch Wars hashtag and Helene responded very enthusiastically (with no promises) and just said that she would love to see it in her inbox – and I’m so so happy that she did. It really made my week – like when your crush smiles at you back!

What I love about the Pitch Wars process is how responsive the mentors have been from the beginning. I basically cried when I woke up (I’m on the west coast) and saw my MS on the list!

Helene, why did you choose Luke’s manuscript?

In the past I’ve fallen for manuscripts I’ve read late in the PW process, but Luke’s was the first manuscript we requested and the first I read. I woke up in the middle of the night after I finished it and knew exactly what it needed to shine and then I kept sending Beth emails begging her to read it so that I had someone to discuss it with. I fell in love with it as a mentor, but also as a reader who had a strong connection to both the subject matter and the characters (including the Best Parents Ever).

Not only did the manuscript speak to my heart, but when we threw questions at Luke, something we always do with potential mentees, his answers were thoughtful and intriguing and it was clear that he was excited about working hard and working as a team to take HEART to the next level.

Beth, why did you choose Luke’s manuscript?

We had so many great submissions this year! With Luke’s manuscript, we were immediately pulled in by the main character’s voice. The supporting cast, too, leapt off the page, and the concept was gripping! Also, it has a corgi in it and that right there was an enormous point in its favor. Helene started pestering me about it as soon as she read it, and I had to fight her off so I could finish other manuscripts that were keeping me up late. In the end, the concept and characters really grabbed us both, and we knew Luke’s was The One!

Luke, summarize your book in 3 words.

Luke, tell us about yourself! What makes you and your MS unique?

I’m a British Youth Counsellor and Art Psychotherapist living in Vancouver, British Columbia. I began writing screenplays originally and had some success as a filmmaker, before I was accepted on to Curtis Brown’s inaugural Six-Month Novel Writing Course in 2014 where I found my tribe and confidence in my fiction writing.

HEART is an #OwnVoices MS. My protagonist, Orwell is also gay and lives with a rare form of OCD (Primarily Obsessional – there are no physical compulsions, only the internalized kind that manifest in both violent and sexual intrusive thoughts) that has been with me since I was 3-years-old. The story was very much inspired by a combination of my own life experiences and the training I underwent as an Art Psychotherapist where I worked with some extraordinary people. It’s a story, primarily, about self-love and acceptance. Where repressed and rejected sexuality meets an honest conversation about what HIV really is – a subject that hasn’t really been been seen much in YA yet, which I think ALL young readers should know more about so they can construct informed opinions.

Helene, tell us about yourself. Something we may not already know.

I never know if I should answer this question with the artistic (I ran my college radio station in the 80’s and first saw U2 in a 1200 seat converted movie theatre), the unlikely (a major movie star kissed me at a party my senior year of college) or the ridiculous (I once had someone at a dance club invite me to join his vampire coven in Brooklyn and yes, I’m writing that encounter into a book).

Beth, tell us about yourself. Something we may not already know.

I shall tell you one of my biggest regrets: I once visited the Galapagos Islands and I was so afraid of sharks that I missed out on swimming with sea lions. I TRIED to swim in the ocean but the sight of the tiniest fish had me paddling back to shore. 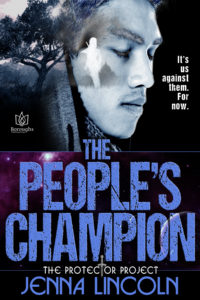 THE PEOPLE’S CHAMPION by Jenna Lincoln

Battle school, a dangerous away mission, and a poisonous queen.

Michael Sterling disappeared from his Maine town five years ago. Everyone assumed he was kidnapped. The truth is worse―he ran away and found the life he always dreamed of.

But now, at seventeen, he’s Sean Woodhouse. And he’s come “home,” to the last place he wants to be, to claim the small inheritance his grandparents promised him when he graduated high school, all so he can save Trip, the neighbor boy he developed an intense and complicated relationship with while he was away.

Sean has changed, but so has his old town and everyone in it. And knowing who he is and where he belongs is more confusing than ever. As his careful plans begin to crumble, so does everything he’s believed about his idyllic other life.