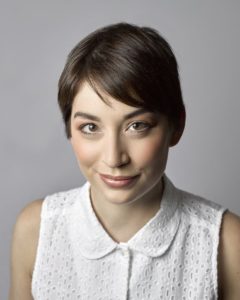 June, why did you choose to submit to Akemi?

I got to know of Akemi some time ago after several friends in the writing community were gushing about her book, Starfish, and about how they were sobbing from its intense emotional beauty. I read her blog and watched her vlogs (she’s so funny and warm!) and followed her on Twitter for book updates.

But when the mentor blog hop started, Akemi wasn’t on my radar initially because I’d zoomed in on four other mentors/teams I had my eye on from long ago since I knew they wanted YA SFF subs. About a week before the application deadline, I read Akemi’s mswl out of the blue and saw that she was open to fantasy subs! I’d mistakenly assumed she’d only be open to contemporary subs.

The thought of subbing to her STUCK in my head. It’s one of those things that’s hard to explain? It felt like a long shot and I was second guessing myself when the submission window opened, questioning why I was compelled to drop one of my earlier steadfast mentor picks for Akemi. Starfish and her second novel delve into complex/dysfunctional family relationships, and that really spoke to me personally as it’s something I relate strongly to. My stories also tend to deal with families in some way. Plus, I wanted to learn from someone who could wield words so powerfully and evoke deep emotions in readers.

In the end, I trusted my gut and my heart, and switched my mentor picks. Fortunately, it worked out!

Akemi, what do you love about June’s manuscript?

I couldn’t get June’s story out of my head! She had an incredible pitch that basically latched onto my soul and wouldn’t let go. And then when I actually read the whole manuscript, I was just completely enamored by her gorgeous world-building, mouth-watering food descriptions, and slow-burn-enemies-to-lovers romance that is the absolute BEST. The story also takes place in an Asian-inspired setting that is so rich and vibrant, and I just know people are going to fall in love with it as much as I have.

June, summarize your book in 3 words.

June, tell us about yourself! What makes you and your MS unique?

I was born and raised in Singapore, but I’ve lived in the United States (currently NYC) for the past decade after graduate school. As a writer of color, diversity for me is something lived, not a passing trend. I often feel doubly-diasporic when it comes to my own identity: not Chinese enough to live in China, too liberal/”westernized” to be comfortable in Singapore, and marginalized in America.

I believe that my writing and stories reflecting this merging of identities where traditional folklore and customs are fused with modern sensibilities. All the characters in my MS are people of color, and the world is distinctly non-western/european. However, I feel that themes can be universal and that’s what connects people from across cultures when reading.

There are easter eggs in my MS in the form of names that Chinese-speaking readers may spot, and references to wuxia films and tropes for those who enjoy this genre. =)

Akemi, tell us about yourself. Something we may not already know.

I’m a vegetarian and I hate mushrooms. Also, if you ever play a board game with me like Monopoly or LIFE, don’t let me be the banker. I will ALWAYS cheat and then laugh way too hard when the game ends and I have like a bajillion dollars. 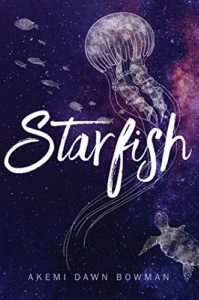 STARFISH. A gorgeous and emotionally resonant debut novel about a half-Japanese teen who grapples with social anxiety and her narcissist mother in the wake of a crushing rejection from art school.

Kiko Himura has always had a hard time saying exactly what she’s thinking. With a mother who makes her feel unremarkable and a half-Japanese heritage she doesn’t quite understand, Kiko prefers to keep her head down, certain that once she makes it into her dream art school, Prism, her real life will begin.

But then Kiko doesn’t get into Prism, at the same time her abusive uncle moves back in with her family. So when she receives an invitation from her childhood friend to leave her small town and tour art schools on the west coast, Kiko jumps at the opportunity in spite of the anxieties and fears that attempt to hold her back. And now that she is finally free to be her own person outside the constricting walls of her home life, Kiko learns life-changing truths about herself, her past, and how to be brave.

From debut author Akemi Dawn Bowman comes a luminous, heartbreaking story of identity, family, and the beauty that emerges when we embrace our true selves. 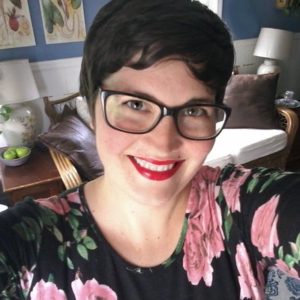 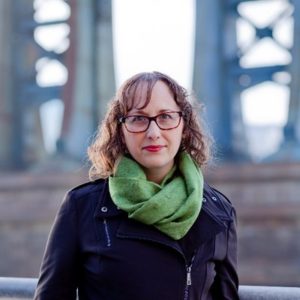 Kay, why did you choose to submit to Kit?

I began to admire Kit early in the PW game, since she participated in the first PW LIVE show. She had such a positive energy and I could see she was really excited about being a mentor. Because she pushed specifically for contemporary with speculative elements, I hunted down her wish list the moment it went live.

Yes, my MS had a speculative twist, yes it had fiercely good female friendship, and yes it had complicated family relationships, but was that enough?

My gut told me it was, and despite other mentors scoring better on my highly strategic (haha) grading scale, she remained my clear favorite right through to submissions. Honestly, I would’ve been thrilled to work with any of the fabulous mentors I submitted to, but Kit really was “the one”. So there was A LOT of ugly, happy sobbing the moment I realized she’d come to the same conclusion about me and my MS!

Kit, why did you choose Kay’s manuscript?

I fell head over heels in love with Kay L. McCray’s HOW TO SAVE A LIFE (the writing! the elite snowboarding! the complicated character relationships!). For me, selecting a mentee involves identifying a project that I’m super passionate about AND that I know I can help. Pitch Wars is a *revision* contest at heart. There were lots of great projects in my inbox, of course, but HTSAL stood out because I could immediately identify ways I could help bring Kay’s manuscript to the next level of awesomeness. And the elite snowboarding. And did I mention the Before-I-Fall-style speculative twist? Yeah!

Kay, summarize your book in 3 words.

Kay, tell us about yourself! What makes you and your MS unique?

The best way to answer this question is to talk about what inspired HOW TO SAVE A LIFE, because it’s what makes both the book and myself unique. If we start from the top, this is a story about a young girl (me) stepping out of her first semester of college and into unexpected motherhood. No, I wasn’t pregnant. Here’s what happened. Oldest Sister is just beginning down that unpredictable and painful road called Opioid Addiction. But Oldest Sister is also a mother, and it’s almost impossible to be a functional mother while in the throes of a powerful addiction. So Young Girl (still me) is suddenly a mom to three kids under four-years-old. Fast forward to a more recent time. My oldest sister is still struggling to stay clean and I’m now a mom to three teenagers.

In January 2017 two things happen that set in motion the ideas for HOW TO SAVE A LIFE. One is a school shooting at my kid’s high school—two students are critically injured and the shooter surrenders his weapon shortly after. The second happening is my oldest, a sophomore in high school, is trying out snowboarding for the first time. It ends with two fractured vertebrae, four months in a brace and weeks of physical therapy. And this is where HTSAL begins: It’s the story of an elite snowboarder on the verge of qualifying for the US Olympic team who loses her best friend in a tragic school shooting—then risks losing so much more if she can’t make good on her choice to re-live the last month of her life and stop the shooting from taking place.

Kit, tell us about yourself. Something we may not already know.

I’m a voracious home cook. One of my super powers is making a totally new and delicious meal from leftovers in the fridge!

Add it to your Goodreads

NOW Ellory is alone, her once inseparable group of friends torn apart by secrets, deception, and a shocking incident that changed their lives forever.

THEN Lazy summer days. A party. A beautiful boy. Ellory met Matthias and fell into the beginning of a spectacular, bright love.

NOW Ellory returns to Pine Brook to navigate senior year after a two-month suspension and summer away—no boyfriend, no friends. No going back. Tormented by some and sought out by others, troubled by a mysterious note-writer who won’t let Ellory forget, and consumed by guilt over her not entirely innocent role in everything and everyone she’s lost, Ellory finds that even in the present, the past is everywhere.

The path forward isn’t a straight line. And moving on will mean sorting the truth from the lies—the ones Ellory’s been telling herself.