And now, introducing Team Yoshi Falls hosted by Brenda Drake along with her co-host Kimberly P. Chase and K.T. Hanna …

Team Yoshi Falls will be hosted this year by our very own Brenda Drake! She will be helping as much as possible while she tours New England signing her latest book, so Brenda will have two co-hosts this year that will be doing most of the heavy lifting (or late-into-the-night reading).

The second round readers searching the best entries for Team Yoshi Falls are . . .

Dannie Morin is an addictions therapist with a writing problem. By day she alternates between counseling teens and wrangling a very sassy toddler. By night she writes, critiques, and edits like a boss. When she’s not doing any of those things, she’s a compulsive participant in the Carolinas Region of SCBWI and a regular Snarky Sue in online Pitch Contests. Dannie pens young adult and new adult fiction in Charlotte, North Carolina.

Repped by John Cusick of FolioLiterary.

And me, Heather Cashman: With a Bachelor’s degree in Biochemistry, the lab reports always lacked the fantastical element Heather’s imagination demands. Hypotheses turned into taglines and novels, so she’s going back to college for a Creative Writing degree. Her novels range from Epic Fantasy to Contemporary Speculative Fiction, she dabbles in picture books, and is currently seeking representation. ~Member SCBWI

Helping out as she can while balancing time with her new baby is blog assistant, Nikki Roberti …

Nikki is a professional journalist and marketer with more than a decade of published writing experience. She is also a young adult author represented by Suzie Townsend of the New Leaf Literary Agency. Before writing novels, she was a seven-time award winning playwright with her short pieces performed around the country, including The Kennedy Center in D.C.

And our Team Yoshi Falls host and co-hosts will pick 15 finalists and post them here on Brenda Drake’s blog.

See Kimberly’s published books at the bottom of this post.

CO-HOST K.T. Hanna: KT Hanna has a love for words so extreme, a single word can spark entire worlds.

Born in Australia, she met her husband in a computer game, moved to the U.S.A. and went into culture shock. Bonus? Not as many creatures specifically out to kill you.

When she’s not writing, she freelance edits for Chimera Editing, plays computer games, and chases her daughter, husband, corgi, and cat. No, she doesn’t sleep. She is entirely powered by the number 2, caffeine, and beef jerky.

See K.T. Hanna’s published books at the bottom of this post. 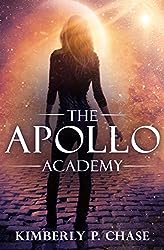 As the heiress to Titon Technologies, eighteen-year-old Aurora Titon can have whatever she wants — clothes, expensive gadgets, anything money can buy. But all she really wants is to escape her pampered, paparazzi-infested life for the stars. Becoming the first female pilot to train as an astronaut for the exclusive Apollo Academy is exactly the chance for which she has been waiting.

Flying is everything she ever dreamed, her best friend also got into the Academy and the paparazzi are banned from campus. Everything would be perfect, except for her unreciprocated crush on a fellow student, the sexy astronaut bent on making her life hell, and the fact that someone keeps trying to kill her.

The most important education doesn’t happen in the classroom…

In the acclaimed, bestselling The Apollo Academy, Aurora fought for her life and her chance at love. Now she’s ready to conquer the final frontier… space.

She just wants to focus on her studies…

It’s a new semester of training at the Apollo Academy and Aurora Titon is ready to put the previous attempts on her life behind her. With Hailen Odette in police custody, Aurora is ready to focus on her dream of becoming an astronaut with the experience of a lifetime: a trip to space.

But danger isn’t finished with the class eight cadets yet…

A deadly virus is released on Aviary, the space station where Aurora and her classmates are training, spreading quickly and without pattern. Mission Control won’t help them, and Aurora and the remaining cadets are trapped until they solve the mystery and find a way to contain the disease or die in the process. Their only hope is Sky, Aurora’s ex-instructor and late night confidante, who will need to betray everything he believes in and everything he’s trained for to save their lives.

With time ticking away and bodies piling up, Aurora faces the fight of her life, for both herself and the men that she can’t choose between…

When Sai’s newly awoken psionic powers accidentally destroy her apartment complex, she’s thrown into an intensive training program. Her only options are pass or die.

Surviving means proving her continued existence isn’t a mistake–a task her new mentor, Bastian, takes personally. Her abilities place her in the GNW Enforcer division, and partners her with Domino 12, who is eerily human for an alien-parasite psionic hybrid.

After eliminating an Exiled scientist, she discovers nothing is what it seems. With each mission more perilous, Sai must figure out who to trust before her next assignment becomes her last.

As Sai recovers from her life-threatening injuries, she struggles to piece together her damaged relationship with Dom. He fights the parasite within, suddenly freed from the interference of the other Dominos in his head.

Inside Central, Bastian’s Shine dosing has become a dangerous dance. Enhanced security protocols and endless meetings have him on a tightrope, with little room to move without revealing himself.

When the GNW release the Damascus to begin their systemic hunt of the Exiled, the noose closes around the rebels and their allies. If they can’t disable the threat, the Exiled won’t be the Damascus’ only agenda.

With the Damascus closing in on the Exiled, Sai and Dom must put their grief and inner demons aside as they rush to free the people of the Protected Conglomerate from the influence of the psionic grid.

Chipped and placed under house arrest with a guard, Bastian’s only hope lies in reaching his core to disrupt Deign’s ruthless plan.

Intent on putting a stop to the Damascus and the GNW’s reign, Dom discovers the true extent of the parasite within. Just when Sai thinks the Exiled have a chance, their greatest weapon turns on them.