The One Million Project . . . Writing for Charity with Jason Greenfield

Today we’d like to introduce the One Million Project, writers and artists donating their work for charity which gives to cancer research and helping the homeless. Here to tell us about it is founder, Jason Greenfield. (His twitter doubles as the OMP twitter as well.) 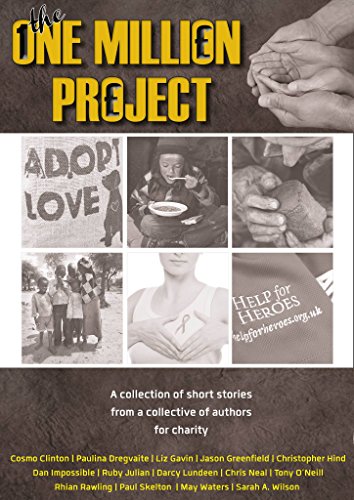 What is the OMP?

A short story collection created by a network of authors, working together to raise money for charity.

What is the Primary Objective?

One Million Project refers to the aspirational sum of £1,000,000, raised through book downloads and paperback sales, with the aspiration of morphing into a Foundation which will continue to raise money for our charities on an ongoing basis, and promote indie writers and artists in their creative endeavours.

Where are we at currently?

The OMP is a collection of 24 stories by 14 different writers, available for kindle and print download sale. We are in the process of updating to include art for every story. For the price of a cup of coffee readers can expect over 600 pages of entertainment, with all profits going to charity, has been donated for free, for this purpose.

The future of OMP?

There are currently over 80 members in the network of writers and artists, as well as media, promotions and project managers. Given the success of the original collection and growth of the OMP brand, we are currently working on further collections to spotlight our newer writers. All profits would continue to accrue towards our £1,000,000 charity goal.

Meet the creator and some members of the OMP . . .

JASON GREENFIELD – Originator of the OMP network (2013+) and author of 11 out of the 24 stories. His works include FOREVER TORN, a powerful biography about his grandfather’s fascinating life, THE UNSEEN MAN (superpowers/sci-fi/fantasy epic), THE DASHING BLADE (A mix of comic and straight action adventure, historical, steampunkesque fantasy set in the 1790‘s) and MAD DOG AND THE ENGLISHMAN (Dark Fantasy and the most offensive book you will ever read! Satirical crude humor). He is currently working on a fantasy universe known as The Mythlands, which mixes (mostly) public domain characters and lands from fantasy, fable, folklore, myth, legend and literature with some modern/pop culture twists in an epic apocalyptic adventure … THE HEIST.

In addition to this, he is slowly adding to his parallel earths novel with a SEN protagonist, TRANSVERSE and building up the OMP network with the hope of raising money for charity and providing an avenue of mutual support for Indie creatives to flourish in a difficult market.

LIZ GAVIN – Liz Gavin is a prolific writer whose hot steamy novels such as LUCK OF THE IRISH, has earned her a loyal following. Liz enjoys mixing her genres to provide superb and interesting storytelling. She is not just a romance/erotic writer, but one who dabbles in history, authentic cultural touches (she is currently working on a historical romance – CELTIC FIRE) and supernatural elements.

An early contributor and supporter of the OMP network, Liz’s promotional efforts, enthusiasm and generous personality are a key asset.

TONY O NEILL – New York Times best selling author for a book he co authored, HERO OF THE UNDERGROUND about NFL player Jason Peter, Tony has parlayed his past experiences with drug addiction into a raft of successful  books, with well realised fictional characters, published by Harper and others in America (where he lives), his native UK and other countries.

His books like DIGGING THE VEIN (his debut), DOWN AND OUT ON MURDER MILE, SICK CITY (optioned for the screen) and its sequel BLACK NEON, have earned Tony a large international following.

KRISTIN JACQUES is an author from small town New England. She grew up in the sticks, surrounded by river wildlife, and various swamp inhabitants. Somehow she managed to keep all her toes despite a run in with a snapper or two.

She lives with her husband and sons in another small New England town. She is mighty attached to them. When not writing, she is likely reading, watching a terrific B-Horror flick, or further spoiling the family cats. Sometimes she has blue hair.

DEBBIE GOELZ is a refugee from Hollywood. She served for ten years as a financial executive for such companies as Universal Pictures, Dino de Laurentiis and Jim Henson Productions. Her performing career began and ended with her puppeteering a chicken during the closing scene in Muppet Treasure Island. Her story Redirection was recently published by Simon and Schuster in the anthology Imagines: Celebrity Encounters Starring You.” She lives in a redwood forest in rural Marin County with her husband. Her two children have abandoned her to seek a college education in New York.

DARLY JAMISON is a Midwestern girl who lived as a Southern Belle in a previous life. She has an incurable addiction to John Hughes movies and is possibly the only person in the history of the world to be fired from the library for reading on the job.

When not writing, Darly can be found hanging out with her husband and children or trying to perfect her chocolate cheesecake recipe.

Her debut novel Strawberry Wine will be released through Kensington Publishing January 31st, 2017.