On My Being the Target of Harassment

First off, I never intended to write this post. When I took on the task of becoming Managing Director of Pitch Wars, I knew it would not be easy, especially coming directly after the fee situation. I’ve been involved in this community for four years. I know that people love Pitch Wars as much as I do and would not hesitate to contact us when they’re concerned. I expected the tweets, the emails, the DMs.

What I did not expect was to be the subject of targeted harassment, simply because I’m the Managing Director of Pitch Wars and, quite honestly, because I’m a black woman.

In the six years that Brenda has been in charge of Pitch Wars, no one has ever anonymously contacted her agent and non-Pitch Wars Boards she may be on making false claims about her. I’ve had both happen to me in the last two weeks, most recently Tuesday when they contacted a Board (one that I’m on and love) alleging that I bullied a fellow writer. The thing that hurt me most was that they tried to use the “Angry Black Woman” stereotype. I’m extremely thankful that both my agent and fellow board members know me well enough to know that is completely not how I handle situations.

Again, when they initially contacted my agent, I was upset (may have even cried a bit) but I had no intentions of sharing it publicly. But at this point, it’s pretty clear that this anonymous person is targeting me and that they don’t plan to stop. I have no doubt that my publisher, day job and even family might be next. I can’t take that risk.

Although I’m their current target, I do believe that this stems from an incident that I was not involved in that also involved several invented personas. And I’m including screenshots of all correspondence to protect myself and the reputation and career that I’ve worked so hard to finally achieve.

Here is the anonymous email that they sent my agent where they pretended to be the spouse of a current mentor that I bullied. You’ll have to click on the image to enlarge it. 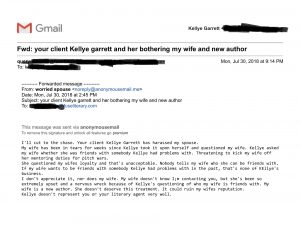 And here is the correspondence that I believe initially put me on their radar in the first place. I have blacked out all names to protect everyone involved. And you’ll have to read from the bottom up on them.

Here’s the initial correspondence. (Please read the bottom email first, again you’ll have to click the image to enlarge it). Please note that I do have screengrabs of their alleged proof but will only release if need be. 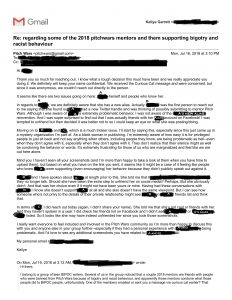 And here is the follow up email. Again you’ll need to enlarge it and read it from the bottom up: 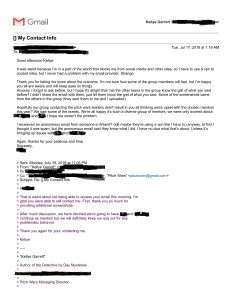 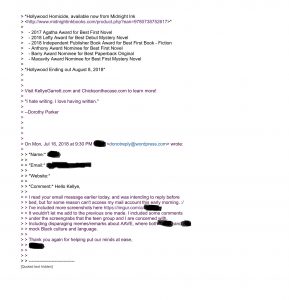 I do not know who this person is, although I’m sure they’re reading this since I’m their target. It’s clear that they want me to be scared and quit Pitch Wars. And that won’t happen. I’m still extremely excited about this year. We have some amazing things coming and I’m happy to have the support of the community and PW committee behind me.