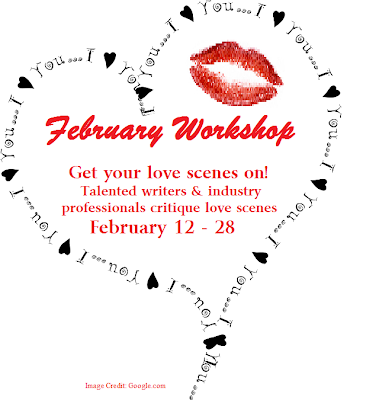 And here’s something about my first guest …

Nazarea’s debut, Edge of the Falls, is releasing March 12.

Here’s the synopsis:
Sabah always knew where she belonged—with Berg—and what was expected of her—to care for the other children the Mistress took in.

But when a ban-wolf saves her life, things begin to change.

Arjun isn’t like the other ban-wolves, the savage creatures that are barely human. He’s gentle and furious and as Sabah spends time with him, she can’t seem to get him out of her mind. But in a world of darkness, control, and danger, is there a place for two outcasts?

A romantic retelling of Beauty and the Beast in a dark dystopia.

You can add Edge of the Falls on Goodreads, and visit Nazarea’s website for more information and excerpts from the book.

TITLE: Deceptive Cadence
GENRE: YA Contemporary
SCENE:
We pushed through the crowd toward them, when my hand was grabbed and I was pulled off course. I found myself in James’ arms as he smiled down at me. “Hi beautiful.”
I swallowed, dazzled I’m not a fan being dazzled. It’s a word choice that sets my teeth on edge by how good he looked and even smelled. Up close I saw he’d brushed his teeth um. That observation is odd for a romantic moment and sorta kills the mood for meand he smelled like men’s cologne rather than the normal cigarettes. I couldn’t help breathing his scent in as my eyes took in the rest. I like your use of scent here.
He knew I was checking him out and grinned. “Dance with me, just for one dance. This would be stronger if you left it at ‘Dance with Me’”
I nodded and he wrapped his arms tighter around my waist. I couldn’t pull away, I couldn’t even look away. Our eyes locked and he smiled. “So Cadence, you’re name’s a little ironic when the only thing that comes close to musical about you is your hollering on the sports field.” This makes me think they just met, or are just meeting. Which makes the kiss awkward.
I grinned. “I know. It’s a family thing, musical names.”
He leaned closer. “It suits you though.” This is a contradictory statement to James’ last piece of dialogue.
I held my breath and without realizing, my eyes darted to his lips. He gave me a crooked smile and shifted closer. His nose brushed against mine and he paused, our lips not quite touching. “Don’t you dare kiss me,” I told him.
“Why not?”
“Because…” but his breath on my lips when he spoke pulled me in and I pressed my lips against his. Huh.
His right arm tightened around me as his left hand came up and caressed my face. My whole body tingled with excitement as I clung to him, our kiss intensifying. But when his tongue slipped into my mouth I pulled away. “Crap!”
He pulled me back against him and planted his lips firmly against mine again. I melted into his arms, as he clasped the back of my head. Okay, the kiss itself is well written and I like it. My issue is the bit leading up to the kiss—the whole thing is a series of contradictions that leaves me more confused than intrigued, and I don’t feel any sexual tension for your characters, which made it hard for me to connect. But. I did really like the kiss!!!

TITLE:  Nameless
GENRE: Young Adult Fantasy
SCENE:
Dalia swallowed the lump in her throat.  “Can I see?”
Prince Aiden took her arm and helped her out of the bed, steadying her.  She thanked him softly as they walked to the mirror.  Aiden stood there, unchanged, but next to him Dalia only saw a stranger.  Her hair was pulled into a messy bun and there were bags under her eyes.  A dark pink scar ran down her cheek from beneath her right eye to her chin.  Dalia covered her mouth as tears started rolling down her cheeks.  Aiden put both hands on her shoulders and gently turned her towards him. Intriguing. I’m curious to know what happened to her.
“Don’t look in the mirror to discover who you are,” the prince stated this is really formal—the prince and the word ‘stated’ considering she’s about to kiss him, moving her hand away from her mouth.  “You are beautiful, on the outside and on the inside.  You’ve given up so much to save those who you owe nothing.  Dalia, you amaze me.”
Aiden leaned in close, pausing for a moment before his lips brushed hers.  The sweet and tangy taste of oranges filled her mouth as he deepened the kiss.  Dalia’s hand went to his cheek, feeling the prickles of his facial hair on her fingertips.  Aiden’s fingers you just used fingertips, so I’d cut fingers here. We assume it was his fingers because nothing else would make sense brushed her hair back as he released a breath through his nose, warming her skin.  Dalia inhaled deeply, taking in the smell of Aiden’s pleasant cologne and savoring the way the scent was just the right amount of soap and oranges he tastes and smells of oranges?.  He broke the kiss and Dalia let out a shaky exhale, frightened she wanted more.  Words couldn’t describe the moment in her mind.  Dalia kept her hand on his face; neither of them moved.
“I’m sorry,” the prince whispered, gasping slightly. Again, overly formal for the situation.
“Don’t be.  I’ve never been kissed before,” Dalia said, keeping her forehead close to his.  “You had oranges for breakfast.” I like this scene—it’s sweet and tender, with a little bit of heat. There are a few polishing issues, but overall, it’s really good.

TITLE: Charcoal and Hot Chocolate
GENRE: NA romance
SCENE:
“Hot chocolate. Charcoal and hot chocolate.” He smiled and chuckled and kissed my nose. Motioning for the easel, I shifted back to look at my picture.
His hand covered mine and lifted it to the paper. “Now, let’s draw you over here.”
“But I’m already over there.”
His other arm closed around me and pulled our bodies close together on the stools. “No. You’re definitely right here.” Because this is dropping me into the middle of a scene, I’m expecting confusion. But this is really confusing.
My heart was about to beat out of my chest. Breathing was becoming something I had to think about and I had forgotten how to draw. The only thing in my mind was River’s
hand on top of mine. This needs to move up to the previous paragraph.
The charcoal touched the paper and a stroke appeared. Slowly but surely, a form that resembled me took shape clarify that he’s drawing and it’s not magically appearing on paper (unless, you know…it is.) . Lifting his other hand he smudged and shaded until the me behind the flowers was no longer there. A new me had taken its place, not in the shadows, but in the sun.
“There.” His kissed my neck. “That’s better.”
His hands were dirty from our artwork, just like mine.
“We should clean up.”
He whipped me around until our faces we level with each other. “Should we?”
He took my face in his hands and pulled me close until our lips met. My body was nothing but desire for him. I could not get enough of his touch. I felt the charcoal streak my face as he held me close while his mouth devoured my own. Nice
“El…I’ve waited so long.”
“Do you believe in that sort of thing?”
His kisses moved to the corner of my mouth, down my chin as I tipped back my head, then along my jaw. He explored my neck and finally trailed small kisses on collarbone to my shoulder, pushing the fabric of my shirt out of the way. “Love at first sight?” I like the chemistry between these two—really nice tension going on. I think aside from clarifying the magical (or not) drawing, you have a really well written scene here. Good work!
Come back tomorrow for more love scene critiques!