Holiday Guest Post & Giveway by Renée Ahdieh … Enter to win an ARC of THE WRATH AND THE DAWN!

I was eleven when I wrote my first story. For all intents and purposes, the fifteen page opus I penned was essentially Nancy Drew fanfiction. I wrote it in loopy cursive with a bright blue erasable pen, the tip of my tongue crimped between my teeth.

I stopped writing stories until I was in college. But I never stopped writing. I studied poetry in school. Wrote essays that won a few awards. I even got to travel to Europe for free because of something I’d written about Moorish architecture in Andalusia. Soon I’d even received enough notice to be published in lauded magazines.

But I was twenty-five before I first decided I wanted to be a published writer of fiction.

And that was a whole new game with a whole new set of rules. I bought the books. Read the rules. Thought if I followed them, I could accomplish anything in due time.

I wrote a novel. It was horrible. Even Idiot Me knew that. Thusly, it was never queried. Then I wrote another novel that was somewhat less awful. Despite Idiot Me (and the disastrous query letter I wrote in SECOND PERSON), I managed to secure an agent.

Was there dancing in the Shire?

My agent left the business a few months after signing me. And, just like that, I was right back where I started.

Needless to say, I listened to a lot of Jeff Buckley and John Legend when all of this went down. I didn’t write for almost a year. There were sincere moments when I thought I had much better things to do with my life than sit in front of a computer for hours on end with nothing to show for it beyond a silly story.

Beyond a love of words.

I remember thinking how much of this process reminded me of a junior high school dance. How, even at twenty-six, I still felt like the girl sitting on the shadowy side of the bleachers, pretending she didn’t want to dance. The girl with the long, dark hair and the holstered quip, sneering down at the peons.

But the truth was, I always wanted to dance.

It just seemed like no one wanted to ask me. So it was easier to remain aloof. But it was very hard to stay that way through it all. Because I always felt like everyone around me received offers of representation at the drop of a hat. Six-figure deals in a finger-snap. Movie options in a . . . mouse’s fart? Or whatever.

But the truth IS, that nothing is ever as it seems. Like the man behind the curtain, much in life is a well-orchestrated show.

I have been working to become a published author for over five years now. This November, I turned in the sixth novel I’ve ever written, the second to be published by a major house. Which means four books I’ve written will likely not amount to much, beyond the lessons they’ve taught me.

But the most important thing I’ve learned is that it does me no good to stay on the bleachers, filled with scorn and furtive longing.

Especially when dancing is much more fun.

Renée Ahdieh lives in North Carolina with her husband Victor and their dog Mushu. Her YA fantasy novel, THE WRATH AND THE DAWN, will be published in 2015. In her spare time, she likes to cook, dance salsa, and wreak havoc on the lives of her characters.

Want to win an arc of THE WRATH AND THE DAWN? Yes you do! Enter the rafflecopter below for your chance to win.

The winner of the ARC giveaway is STEPHANIE GARBER!! Stephanie, please email me your mailing address at brendadrakecontests@gmail.com. 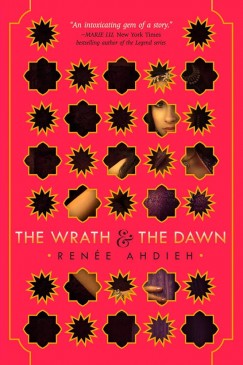 Every dawn brings horror to a different family in a land ruled by a killer. Khalid, the eighteen-year-old Caliph of Khorasan, takes a new bride each night only to have her executed at sunrise. So it is a suspicious surprise when sixteen-year-old Shahrzad volunteers to marry Khalid. But she does so with a clever plan to stay alive and exact revenge on the Caliph for the murder of her best friend and countless other girls. Shazi’s wit and will get her through to the dawn that no others have seen, but with a catch . . . she’s falling in love with the very boy who killed her dearest friend.

She discovers that the murderous boy-king is not all that he seems and neither are the deaths of so many girls. Shazi is determined to uncover the reason for the murders and break the cycle once and for all.

Praise for THE WRATH AND THE DAWN:

“Don’t be surprised if the pages melt away and you find yourself racing through warm, golden sands or drinking spiced wine in cool, marble courtyards. This is an intoxicating gem of a story. You will fall in love, just as I did.”

“In her absorbing debut, Renée Ahdieh spins a tale as mesmerizing as that of her heroine Shahrzad, filled with lush details and brimming with tension. The Wrath and the Dawn is truly an exceptional story, beautifully written.”