Happy Release Day to THE DISASTERS by Mentor M.K. England 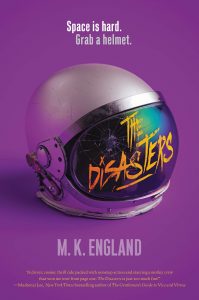 The Breakfast Club meets Guardians of the Galaxy in this YA sci-fi adventure by debut author M. K. England.

Hotshot pilot Nax Hall has a history of making poor life choices. So it’s not exactly a surprise when he’s kicked out of the elite Ellis Station Academy in less than twenty-four hours. But Nax’s one-way trip back to Earth is cut short when a terrorist group attacks the Academy.

Nax and three other washouts escape—barely—but they’re also the sole witnesses to the biggest crime in the history of space colonization. And the perfect scapegoats.

On the run, Nax and his fellow failures plan to pull off a dangerous heist to spread the truth. Because they may not be “Academy material,” and they may not even get along, but they’re the only ones left to step up and fight.

Full of high-stakes action, subversive humor, and underdogs becoming heroes, this YA sci-fi adventure is perfect for fans of Illuminae, Heart of Iron, or the cult classic TV show Firefly and is also a page-turning thrill ride that anyone—not just space nerds—can enjoy. 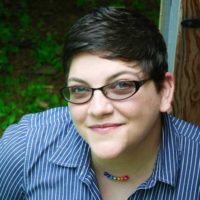 M.K. England is an author and YA librarian who grew up on the Space Coast of Florida and now calls the mountains of Virginia home. When she’s not writing or librarianing, MK can be found drowning in fandom, going to conventions, rolling dice at the gaming table, climbing on things in the woods, or feeding her gaming addiction. She loves Star Wars with a desperate, heedless passion. It’s best if you never speak of Sherlock Holmes in her presence. You’ll regret it. THE DISASTERS is her debut novel.