Happy Release Day to LATE TO THE PARTY by Kelly Quindlen 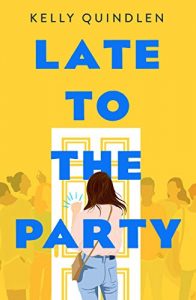 From author Kelly Quindlen comes a poignant and deeply relatable story about friendship, self-acceptance, and what it means to be a Real Teenager. Late to the Party is an ode to late bloomers and wallflowers everywhere.

She’s never crashed a party, never stayed out too late. She’s never even been kissed. And it’s not just because she’s gay. It’s because she and her two best friends, Maritza and JaKory, spend more time in her basement watching Netflix than engaging with the outside world.

So when Maritza and JaKory suggest crashing a party, Codi is highly skeptical. Those parties aren’t for kids like them. They’re for cool kids. Straight kids.

But then Codi stumbles upon one of those cool kids, Ricky, kissing another boy in the dark, and an unexpected friendship is formed. In return for never talking about that kiss, Ricky takes Codi under his wing and draws her into a wild summer filled with late nights, new experiences, and one really cute girl named Lydia. The only problem? Codi never tells Maritza or JaKory about any of it. 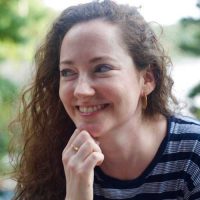 Kelly Quindlen writes about queer teens and their journey to understanding themselves. Her self-published novel, Her Name in the Sky, was featured on BuzzFeed, AfterEllen, and Bustle. Her traditional debut, Late to the Party, releases in April 2020. Kelly is on the leadership team of Fortunate & Faithful Families, which supports and affirms Catholic parents with LGBT children. She has spoken at PFLAG gatherings, high school GSA meetings, and Catholic retreats. She lives in Atlanta with her sweet girlfriend and not-so-sweet chihuahua.

Get more info about LATE TO THE PARTY