Happy Release Day! ABOUT THAT NIGHT by Laura Brown

Join us in celebrating former-mentor Laura Brown’s latest release, ABOUT THAT NIGHT… plus a quick peak at her upcoming August 2021 release! 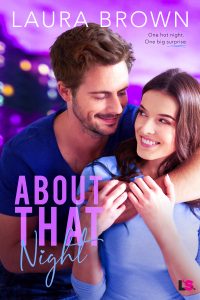 Izzy Fineberg can take on any challenge—and she’s had some big ones lately. After one fateful night with the hottest Deaf man she’d ever met, Izzy found she was pregnant with his child. And she never caught his name. She’s been doing the single mom thing for nine months now, and surely, nothing could be more challenging than that. But her first day at her new job, she meets her supervisor…and recognizes him immediately.

Nolan Holtzman never expected to see Izzy again, and now, she’s the new hire at the agency he works in. He’d think things were finally going his way for once, if not for the iron-clad ban on interoffice dating. He’ll have to keep his distance from her if he wants to keep his dream job helping the Deaf community. Much easier said than done when Izzy drops the bomb that she’s a single parent…of his son.

It’s the shock of his life, but that won’t stop him from stepping up to be a dad. So when Izzy is suddenly in need of a place to stay for a week, Nolan invites her and the baby to his home. But even as difficult as it is, keeping their little family a secret from their employer isn’t their biggest challenge ahead…

And coming in August…

A stranger’s NSFW text wasn’t part of her plan… 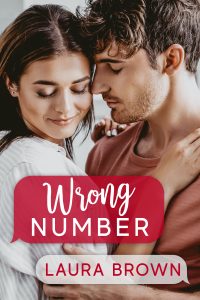 Avery Bloom has her entire life mapped out…until a stranger mistakenly texts her a dick GIF that changes everything. When insomnia has her wide awake before starting a new job, his text is a welcome distraction. Soon Avery’s dirty texting a stranger, and reveling in the freedom of being someone other than her usually-reserved self—someone who doesn’t have a hearing loss and isn’t trying to fulfill a dream that isn’t hers.

Jake Ruben never intended for that particular image to end up in a stranger’s messages, but he’s not complaining. His textmate is sexy and fun and—unlike anyone in his real life—knows nothing of the burns that limit his mobility. The new pastry chef at his mother’s Jewish bakery does, and she’s as tempting as her cupcakes. Soon he’s texting less and seeing Avery more.

But when Jake learns Avery is his texting pal, the revelation shocks them both. Will they have a chance for love without a screen to hide behind? 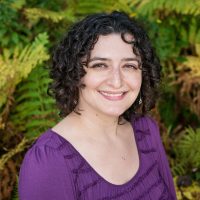 After spending her childhood coming up with new episodes to her favorite sitcoms instead of sleeping, Laura Brown decided to try her hand at writing and never looked back. A hopeless romantic, she married her high school sweetheart. They live in Massachusetts with their three cats and kid. Laura’s been hard of hearing her entire life but didn’t start learning ASL until college, when her disability morphed from an inconvenience to a positive part of her identity. At home the closed captioning is always on, lights flash with the doorbell, and hearing aids are sometimes optional.