Tuesday, 10 March 2020  |  Posted by Rochelle Karina
The Anthony, Agatha, and Lefty award-winning first book in the Detective by Day series is now available in audio and narrated by Bahni Turpin. It was also a 2014 Pitch Wars selection!
About the book: 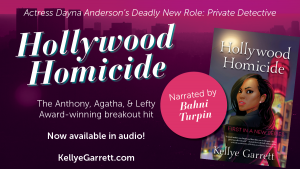 Dayna Anderson doesn’t set out to solve a murder. All the semifamous, mega-broke actress wants is to help her parents keep their house. So after witnessing a deadly hit-and-run, she pursues the fifteen grand reward. But Dayna soon finds herself doing a full-on investigation, wanting more than just money—she wants justice for the victim. She chases down leads at paparazzi hot spots, celeb homes, and movie premieres, loving every second of it—until someone tries to kill her. And there are no second takes in real life.

Buy it on Audible and wherever audiobooks are sold.
About Kellye 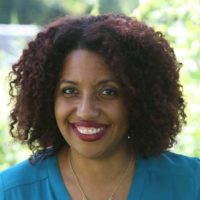 Kellye Garrett’s HOLLYWOOD HOMICIDE, about a semi-famous, mega-broke black actress, won the Anthony, Agatha and Lefty for best first novel. It’s also one of BookBub’s “Top 100 Crime Novels of All Time.” The second, HOLLYWOOD ENDING, was featured on the TODAY show’s Best Summer Reads of 2019 and was nominated for both Anthony and Lefty awards. She co-founded Crime Writers of Color and serves on Sisters in Crime’s national board.
Website