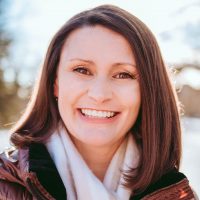 JESSICA VITALIS is a Columbia MBA-wielding writer. After leaving home at 16, Vitalis explored several careers before turning her talents to middle grade literature. She brings her experience growing up in a nontraditional childhood to her stories, exploring themes such as death and grief, domestic violence, and socio-economic disparities. With a mission to write entertaining and thought-provoking literature, she often includes magic and fantastical settings. She also founded Magic in the Middle, a series of free monthly recorded book talks, to help educators introduce young readers to new stories. She was recently named a 2021 Canada Council of the Arts Grant Recipient. An American expat, Vitalis now lives in Canada with her husband and two precocious daughters. She loves traveling, sailing and scuba diving, but when she’s at home, she can usually be found reading a book or changing the batteries in her heated socks. Her debut novel, The Wolf’s Curse, publishes September 21, 2021 with a second book set to follow in the fall of 2022.

Twelve-year-old Gauge’s life has been cursed since the day he witnessed a Great White Wolf steal his grandpapá’s soul, preventing it from reaching the Sea-in-the-Sky and sailing into eternity. When the superstitious residents of Bouge-by-the-Sea accuse the boy of crying wolf, he joins forces with another orphan to prove his innocence. They navigate their shared grief in a journey that ultimately reveals life-changing truths about the wolf––and death. Narrated in a voice reminiscent of The Book Thief and Lemony Snicket, this fast-paced adventure is perfect for fans of literary fiction fantasy such as A Wish in the Dark and The Girl Who Drank the Moon. 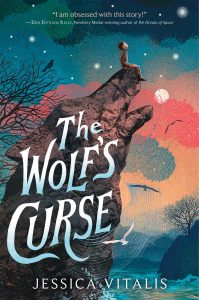 I’d like to offer my 50,000 word middle grade historical fantasy, [TITLE], for your consideration.

. [This feels very “telly” and doesn’t give me a sense of your character or the unique aspects of your story. The following paragraph does a much better job of pulling the reader in, so I’d start there.]

When a notoriously haunted manor succumbs to a Nazi bomb blast in WWII era London, his thirteen-year-old Jack “Nimble” Nottingham[no need to tell us this when you show us right after], sets out to scavenge the spooky ruins. Far beneath the manor, in a hidden alchemist’s laboratory, the orphan stumbles upon a candle that’s been burning for more than three-hundred years. [trying to figure out when the Great Fire of London occurred is distracting—just give us the info]and  He accidently extinguishes it,. freeing; a predatory shadow that , spreads a plague-like sickness through the city .

Fleeing for his life, Nimble meets Allister Evermoor, a peculiar recluse who knows much more about the shadow monster than should be possible [Can you come up with something more specific than “should be possible”; this phrase is too vague and makes me suspicious of Allister, but the following sentences makes me think he’s a “good guy” so I’m left feeling confused about the role he’ll play]. Together, and with the help of the misfit orphan gangs that call the London docks home, they’ll need to figure out how to stop an Evil that thrives in darkness amid a mandatory Blitz black out. If they can’t, the shadow monster won’t stop at London, it will darken the world. [Great stakes!]

. [The second sentence tells us what you’ve already shown us, and the first sentence can easily be folded into your introduction; I’d recommend deleting this paragraph.]

[You have all of the right elements at play in this query (and the story sounds fantastic!); my suggestions all center around tightening the query to quickly draw the reader in and giving them a sense of the most important elements in the story in a way that “shows” rather than “tells”.]

I [Don’t indent the first para in a new chapter] sat on the roof of The Dusty Knuckle Bakery [Love this name!], gnawing a piece of petrified bread., [No need to tell us he’s watching—show us instead.] aA zebra galloped down Apothecary Street, kicking up dust. In its dusty wake, Uniformed men scrambled over x [describe here exactly what they are encountering in a specific way—what does “ruined” mean for them? Show us the destruction so when you tell us about the bleakness later, we know what we’re visualizing.], brandishing ropes and shouting [what are they shouting? Help us feel like we’re there].. Zookeepers, probably. But could’ve been Red Cross. Maybe even Royal Air Force lending a hand.

[New para here]A zebra loose in London should’ve amazed me, but the destruction surrounding it was too bleak. Too depressing. Smoke and ash and fog all mixed together, turning the whole world grey. This was life in The Blitz .

[It feels to me like this belongs to the previous para?]Nothing amazed me anymore.

“You there, boy!” Asour-faced lady squinted up at me from the street, [I’m not sure this detail is needed—I don’t know how to visualize what she’s wearing in the context of your story and I don’t know that this is the right time to slow down to explain], nearly invisible in the shadow of a recently-exploded double-decker bus. “What are you doing? You shouldn’t be up there. It’s not safe.”

She was right, it wasn’t safe. But from where I was sitting, nowhere looked particularly safe. The previous night’s bombing had demolished at least a quarter of Apothecary Street, making it look as though a blindfolded giant had rampaged through in flaming boots. [Nice voice!]

In truth, , the Proprietor of The Dusty Knuckle, didn’t know I was up there at all. And he hadn’t so much given me the bread as he hadn’t been looking when I swiped it. [Love this—gives us a great sense of this character! One tiny detail that I’m wondering about—why is the baker selling “petrified” bread? Is this common because of the war? Generally bakers pride themselves in fresh bread and I would think he would be throwing out stale bread anyway, but maybe because supplies are so low people will buy anything they can get? Overall,  I’m intrigued by this opening and would definitely read more—nice work!]

Thank you, Jessica, for the critique! We are showcasing three mentor critiques each day leading up to the Pitch Wars 2021 submission window, so make sure to read the other two critiques for today and come back tomorrow for more.