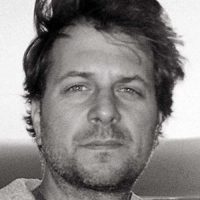 Matthew Quinn Martin is the author of the NIGHTLIFE series (Pocket Star/Simon & Schuster) and the co-writer of the produced feature films SLINGSHOT and BEING (as well as several more in various stages of development). He teaches creative writing at Western Connecticut State University’s MFA program. www.matthewquinnmartin.com 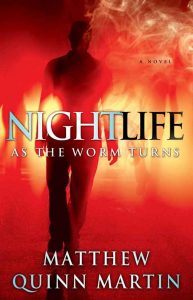 Enter a world where the streets crawl with unimaginable demons, and a monster can lurk behind every friendly face. Matthew Quinn Martin first terrified horror fans with Nightlife, the captivating story of two unlikely monster hunters determined to save the city of New Harbor from the Night Angels—bloodthirsty creatures that feed on the forgotten. Jack Jackson and Beth Becker are among the few who can see these creatures for what they really are, but as they hunt the creatures, a mysterious organization known only as The Division is hunting them.

In the novella Hazardous Material, we get a glimpse of The Division’s origins and aims when a young man stumbles onto a long-abandoned video arcade—which three decades ago was the site of the largest mass shooting in New York history—and unwittingly uncovers a relic of unimaginable power and mind-altering terror.

And in the never-before-released As the Worm Turns, Jack and Beth are back, along with their faithful dog, Blood. For months they’ve been keeping just one step ahead of The Division, whose enigmatic leader has been pursuing them with the single-minded obsession to capture them by any means necessary. But as Jack and Beth continue their quest to rid the world of the creatures once and for all, they find themselves facing off against something even more terrifying than the Night Angels––something that could hold the key to humanity’s salvation…or its doom.

Wyndham Durante, crown heir of Volturia, harbors a dangerous secret that may destroy the country he loves [probably nitpicking, but what royal wouldn’t love the country that awarded them power based on a trick of birth? would like to see some of that “reluctant hero”/growth even this early] . . . if it doesn’t destroy him first.

When he killed his best friend, Xavier, [OK, no problem with dark fantasy, but this phrasing makes the killing sound intentional…if not, add a modifier…if so, add a rooting interest/justification] in the world of shadows, he unwittingly created a shadow-walker: […this is too many uses of the word “shadow,” imo…you might want to dig deeper] a monster that feeds on humankind’s [humanity in general? or this particular human?] deepest regrets and darkest desires. Now this monster lurks in the shadows [again…if it’s a shadow that “lurks in the shadows” this gets confusing and redundant…you see where I am going here], pulling strings and biding its time for justice and revenge. [OK…now I am thoroughly confused. Is this creature supposed to be the bad guy? Because justice is a good thing…right?]

Wynn is determined to destroy Xavier [wait, I thought he killed Xavier…if Xavier IS now the shadow-walker, we need to know this] before anyone is harmed. [low stakes…lift] But he must keep his actions secret, because in Volturia, the creation of a shadow-walker is punishable by death. [Two things are tripping this up there. A) that law sounds fair, and we haven’t had a single reason to root for Wynn except that he’s a prince. B) wouldn’t destroying the shadow-walker be the same goal as the people who would punish him? C) …OK, three things…just “death” and just “harmed” are low stakes for a fantasy world where you can come up with any punishment…corporeal or ethereal…that you want. Let your imagination go wild!]

His plans are complicated when a rebellion arises, fueled by commoners who were wronged by corrupt members of the nobility. This rebel faction is determined to make all the nobility pay and don’t seem concerned if the innocent get caught up in their fury. […but aren’t these very “commoners” the innocent ones in this scenario? This is going to need more staging.]

And if that weren’t enough, this year’s Matching is his last chance to choose a wife before the choice is made for him. He holds no expectations for finding romance, as he is expected to marry for the good of Volturia. But he’ll soon find that the choice between his heart and his duty is more difficult than he ever imagined. [OK…I get the need to put a love interest in…even if I don’t agree with that for every story. But this is less of a love interest and just another complication, and a low stakes one at that…it runs the risk of becoming comic. If that’s what you are intending, however, lean into that.]

TITLE is a Young Adult Fantasy novel of 100,000 words [this word count would be a hard sell in YA for even an established writer, let alone one seeking representation…I would council to aim in the 60-75 range] and is written to be the first of two books. [again, would council against firm language like “first of two books” and pivot towards “has franchise potential.”] It is aimed at readers who enjoy the intrigue of the TV show CODE GEASS [might want to refer to this as an “anime” rather than a TV show] and the romance of Stephanie Garber’s CARAVAL series. [this is kind of flat for an ender…you want the last line to be as engaging as the first. You want to leave them wanting to see more.]

Prologue: [This is kind of a “meta” note here, but I’ve always found that prologues are best when they are set some distance from the main narrative. This allows a “teaser” of the main threat to be revealed to the reader, but still hidden from the protagonist. Now, since this is only one page, I don’t know if that’s going to be the case here, but from from the way this reads, coupled with the query, I suspect that it isn’t. If that’s case, I would suggest either finding a different framing device, or simply starting here with “chapter one.”]

Wynn stepped warily through the eerie black-and-white forest to peer into the shadowy clearing. It was too quiet. Every sound seemed muffled and indistinct, as if someone had stuffed cloth in his ears. The world of shadows was unnerving. [this paragraph—while mostly fine—is a little limp for an opener. I would recommend cutting it and starting with…]

A man stood in the middle of the clearing, surrounded by shadows. The shadows were shaped only vaguely like humans; their forms seemed to waver and twist, tendrils of shadow snaking and disappearing into thin air, like smoke. It was dizzying to watch. [OK, three uses of the word “shadow” in such a short paragraph is a little tiring. The second could easily be replace with “they.” Also watch for modifiers that sap the energy. Are they “seeming” to waver and twist? Or are the wavering and twisting? Same with the editorializing at the end. Just make it dizzying and the reader will get it.]

“Are you following me, Wynn?” The figure’s voice was as cold as ice. The shadows whirled around him, their voices grating as they whispered to him.

Dread pooled in his stomach. How had the figure known he was there? “You’re conversing with shadows,” Wynn accused the man. [could use more clarity here] “They won’t help you; all they want is to consume you. They’ll drive you mad.”

The man’s eyes glinted. Something was off, Wynn realized. The man’s eyes should have been an icy, piercing blue. But instead, they were a deep, glistening black. [again…very unclear as to who/what this is? We could really use more scene setting and character work before we get to this. It doesn’t have to be lengthy—it can be extremely compact—but having some kind of handle would be useful.]

“What does it matter? All I want is justice. How many wrongs did we see in our time that we couldn’t make right? The shadows will help me, Wynn. They’ll make everything right.”

He stretched out a hand to Wynn. “Join me. We can cleanse this world of all injustice, but I can’t do it alone. I need your help.” [OK…the way that they are talking makes it seem that they are fairly close…so why “man” and “figure” and not the character’s name?]

Wynn recoiled. “I would rather die than let myself be consumed by the shadows. It’s wrong, and you know it.” [all of the dialogue is very direct. A lot of character work and plot work could be layered in with some hints, allegations, sub-text, etc. You might want to spend more time here]

The figure sighed. “So be it. You were never strong enough to do what needed to be done.”

[My thoughts, overall, is that you have an interesting premise here—and a durable archetype in the “shadow haunting” trope. Some work on making the prose a bit more lively, the setting more present, and the characters somewhat more grounded would pay dividends. Granted, I only have the one page to look at. However, I’ve seen a lot of manuscripts that really only get moving about 30 pages in, and the writers are just kind of “easing” into the story. You may want to talk to some of your beta readers and ask them where things kick into high gear for them. Best of luck with it and with the rest of Pitch Wars – mqm]

Thank you, Matthew, for the critique! We are showcasing three mentor critiques each day leading up to the Pitch Wars 2020 submission window, so make sure to read the other two critiques for today and come back tomorrow for more.