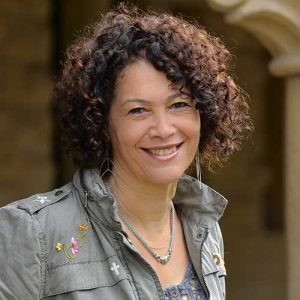 Lisa Moore Ramee is the author of the best-selling and critically acclaimed MG novel, A Good Kind of Trouble and the newly released Something to Say. She lives in Northern California with her husband, two kids, two obnoxious cats and a huge Rottweiler puppy. Top Chef is her favorite show and she dreams of a day when she could be a guest judge. 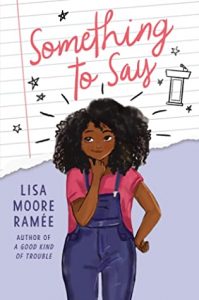 From the author of A Good Kind of Trouble, a Walter Dean Myers Honor Book, comes another unforgettable story about finding your voice—and finding your people. Perfect for fans of Sharon Draper, Meg Medina, and Jason Reynolds.

Eleven-year-old Jenae doesn’t have any friends—and she’s just fine with that. She’s so good at being invisible in school, it’s almost like she has a superpower, like her idol, Astrid Dane. At home, Jenae has plenty of company, like her no-nonsense mama; her older brother, Malcolm, who is home from college after a basketball injury; and her beloved grandpa, Gee.

Then a new student shows up at school—a boy named Aubrey with fiery red hair and a smile that won’t quit. Jenae can’t figure out why he keeps popping up everywhere she goes. The more she tries to push him away, the more he seems determined to be her friend. Despite herself, Jenae starts getting used to having him around.

But when the two are paired up for a class debate about the proposed name change for their school, Jenae knows this new friendship has an expiration date. Aubrey is desperate to win and earn a coveted spot on the debate team.

There’s just one problem: Jenae would do almost anything to avoid speaking up in front of an audience—including risking the first real friendship she’s ever had.

I would like to offer my MG novel Title for your consideration. [personal preference but I like going right to the pitch. They know why you’re contacting them.]

On the cusp of her thirteenth birthday, [If the fact that she’s almost 13 isn’t relevant let’s leave out. It’s mg so a general age is assumed.] Ella is still reeling from the sudden loss of her mother [when she must . She accompany her father to a remote Scottish manor for the funeral of his oldest friend. She feels unsettled by Ravenfell, which is the scene of a recent murder. The manor is f]illed with eccentric curios and precious objects, and has far too many Ravens of both the feathered and family varieties.[Hope this isn’t confusing, but the suggestions to this paragraph is assuming that the funeral and the murder weren’t related. If they are…if the funeral is for a murdered friend then I have a different suggestion below. In any case the murder is the more intriguing detail than the funeral.]

After her father is arrested for the theft of a valuable artefact, Ella she has no choice but to [saying she has no choice means she’d prefer not to, but you haven’t introduced something that would have us know why she’d be reticent to help. Or that no one is on her father’s side, which we also don’t know here. So you can delete the no choice line and go directly to joining forces (but tells us how she feels…Angry that no one will help… Afraid of the shadows, but more scared of what will happen to her father…teams up with the son of the murdered laird to try to prove his innocence and identify Cornelius’s [Who is Cornelius? If that’s her father’s friend, then let’s join up the two things going on in the first paragraph. We have Ella coming to a funeral and the scene of a murder so it sounds like two unrelated things. So if the funeral is for the murder victim let’s establish that. I.e., Ella is still reeling from the sudden loss of her mother when Cornelius, Ella’s father’s oldest friend, is murdered. Ella must accompany her father to a remote Scottish manor for the funeral.—use your more eloquent language ;)] killer. They become aware that three hidden treasures are at the heart of both mysteries, but struggle to unravel Cornelius’s cryptic clues and discover the location of the priceless objects. Someone else is searching too, roaming the manor at night, masquerading as an ancient Raven ghost.

When Ella’s father is accused of even more serious crimes in order to keep him away from Ravenfell and the treasures, she and Lachie become engaged in a dangerous race with the increasingly ruthless Ghost, who always seems to be a step ahead of them.

Realising that sometimes you have to attack in order to defend, they lay a trap for the Ghost, but things go badly astray. All of their lives are now at stake and Ella must overcome her deepest fears and the Ghost if she is to have any hope of saving them.

Title is a Middle Grade Adventure/Mystery (50,000 words). It is a stand-alone title (with potential for a sequel) which will appeal to fans of Serafina and the Twisted Cloak and The Ten Thousand Doors of January. Somehow, a little flicker of the supernatural sneaked its way into the story, but that’s the sort of thing that happens at Ravenfell.[Although I’m a fan of these types of winks to the reader, I think it would serve your query better to instead mention within the summary an example of the supernatural—unless what’s supernatural is The Ghost—in which case you’ve already done that. But I suspect you mean more than that?]

I have had a number of articles published in Good Reading Magazine (Australia) about travelling to the settings which inspired my favourite authors. An English teacher and librarian, I enjoy working with middle grade students to foster and expand their love of literature. I am excited to read and write fiction for this age group.[great including your travels, and I’m wondering if maybe you want to say how the settings inspire your storytelling?]

Tyres crunched on gravel, launching birds into startled flight. [my grammar sucks, so don’t know what this issue is called but it’s not the tires that are startling the birds it’s the crunch…is it dangling modifier? I’m not sure but you never want your very first sentence to be one that someone is going to take issue with. What if you just start with: “Birds launched into startled flight.”?] With harsh croaks and a great clamour of wings, they rose to circle the ivy-clad tower, flapping like ragged shadows thrown against a sodden sky.[love “thrown against a sodden sky” not sure about “ragged” shadows, as I feel shadows are sort of always ragged, aren’t they?]

“Ravens.” Dad set down their luggage on the driveway. “Welcoming us to Ravenfell.”

Ella shivered and pulled her coat tight. Dank mist stung her face as she stared up at the house, a frowning puzzle of chimneys, turrets and mullioned windows. Grey. Grim. Brooding. She frowned. Like a prison.

“Isn’t it supposed to be summer here?”

Dad laughed, sending a cloud of vapour into the icy air. “Summer in Scotland’s a bit different from summer at home.”

The manor was larger than she had thought, and much older.

He gestured to the roofline. “Did you notice the gargoyles?”

She peered at the sculptures perched like guardians on the parapet. A row of ravens carved in stone. And every single one seemed to be staring straight at her. Unease prickled in her fingers and shivered in her bones.

He put his arm around her shoulder.

“I’ve stayed here loads of times. I promise you, there’s nothing to be afraid of.”

Even so, something cold slid down her spine.

“I don’t want to go in.” She could hear the wobble in her voice.

He gripped her tighter. “Ella, I know this is hard, especially so soon after, um, everything. But I promised Cornelius I would look out for Lachie.” He pushed the hair gently away from her eyes. “It’s only going to be a few weeks. Then we can go home.”

His own voice faltered a little and Ella knew they were thinking the same thing. She tried to swallow the awful lump in her throat. Home to a house without Mum. [good introduction of Mum being gone. Feels very natural.]

[Identify Ella here, because last person mentioned in paragraph above is Mum. I recommend making the mistake of over identifying rather than under. You don’t want your reader thinking “who?” when they read a pronoun.] Ella She started as the front doors opened and a tall, gaunt woman came down the steps.

“Welcome, Miss Lee. I’m Mrs McPherson, the housekeeper.” Her hair was grey, piled high in a bun, her accent as broad as her smile. “Professor Lee.” She nodded at Dad and extended a hand.

“I’ll take the cases Mrs Mac,” Dad said. “It’s good to see you again, but I wish the circumstances were different.”

The woman hesitated, glancing at Ella. “Yes, these are sad times for all of us. I was very sorry to hear about your mother, lass.”

Ella nodded her thanks, unable to speak.

There’s not a thing wrong with your writing that is for sure! Lovely strong prose. So what’s the problem? You’ve set a lovely table for us. The candles are lit. The plates are shiny. The tablecloth is beautiful if perhaps hiding a less than lovely table. But where is the meal? I want to know who Ella is in the first few lines. Now voice is third person is tricky. But it gives you the gift of being able to show us who she is. Is Ella doing a bit of business that Mum would have disapproved of? Is that how you let us know she is grieving? Or when she shivers and pulls her coat tight does she know that Mum would have told her to pack warmer clothes? We see Ella clearly but we don’t know much about her. Why does this house spook her? Is she prone to being easily scared? Is Mum the one who calmed her fears?

You may be starting at the wrong place. It feels natural to start here. It’s the “beginning” of Ella’s time at Ravenfell after all, but often the logical place turns out not to be the right place. Often when we start at the literal beginning, we find we then have to jump days, if not weeks, forward to where the real action starts. Maybe the friend’s funeral is where you start? I’m sure that will be a difficult moment for Ella and probably gives you the opportunity to start closer to the heart of the story. To the mystery. Right now, Ella feels foreboding but it’s not based on anything, so we’re not scared yet. Give us a bit of a fright.

All that being said, I would still turn the page, and that’s always the first step!

Thank you, Lisa, for the critique! We are showcasing three mentor critiques each day leading up to the Pitch Wars 2020 submission window, so make sure to read the other two critiques for today and come back tomorrow for more.