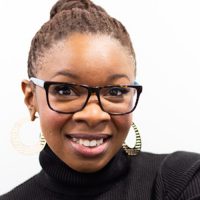 By day, I’m a curious tech anthropologist, asking the right questions to deliver better digital services for the world. By night, I dream of ways to subvert canon literature. I’m an Earthbender, Reylo shipper and an illustrious member of Smut U, a premium feminist writing collective.

[Title] is an adult upmarket science fiction novel, complete at 126,000 words. It is a standalone with series potential, can be described as a queer, feminist BLADE RUNNER and would appeal to fans of Tamsyn Muir’s GIDEON THE NINTH and Arkady Martine’s A MEMORY CALLED EMPIRE.

Humans have scientifically defined the soul, and Masha, a human-looking AI robot, has been found wanting. [I like this!] That’s fine.[No it’s not fine. This isn’t a stream of conscious thought. It’s a query. What are the benefits of  having a soul? What does Masha deeply desire but lack] She doesn’t need a soul. She’s designed to be useful to humanity, and she’s good at it. Until she breaks, gets infected by a murderous-rage virus and faces her worst nightmare: being bloody useless. [whoa her worst nightmare is being useless when she just got infected with a Murder Rage Virus?]

She seeks sanctuary at the London Branch of the Church of the Intelligent Soul where the theological scientist, Anissa, informs Masha she’s not the only one breaking down. The whole world is deteriorating and Masha’s damaged code might be the key to stopping it. They need to find a cure and fast, before the general populace learns about killer robots and all AI servants are forcefully recalled.

As they work together, Masha’s feelings—including for Anissa—deepen, as does her doubt about the Church’s true intentions. [This could be creepier: As Masha’s feelings for Anissa deepen, her skepticism of the Church grows. As their true intentions begin to crack through their sinister veneer.] Maybe Masha isn’t broken, but turning into something better. Maybe the delineation between the organic and mechanical isn’t as scientifically robust as previously thought. [no stakes here Why is this important] Maybe robots have been kept in the dark about what they are.

The problem is, [Start here. As the virus takes over] Masha must give into her growing rage to find the truth, and doing so will doom the human masters she is programmed to protect—including the one she’s falling for.

[This  first sentence needs to be  a donkey kick. I like Masha did not have a soul. but it doesn’t connect well to a movie theatre]

Masha did not have a soul, so her visit to the theater was unnecessary. Her colleagues would have told her that if she had bothered to inform them of her excursion.

But the ticket had cost only five pounds and 30 pence, and the address of the theater—a crumbling place on the outskirts of London—had emerged from the zapping depths of Masha’s mainframe that evening and consumed her. The address was 25 Square Lane. And it called to her like a flutter of broken static. Like an impulse. A glitch. She was compelled to go. She did not know why. [ Beautiful]

It was not her place to seek art. [ art + souls is a deeper connection than the theatre may be personal] Or to ask questions like why? Or what for? Or to barrel blindly into the dusty gray of the Outskirts, looking for that which she could not define. [This is an awesome scene and could really bring home her need to be useful. but you need to show it and not tell it. It’s a great inciting action. In fact You can start it just like this. Masha witnessing a crime. you can bring the usefulness and soul themes with this set up]  And it was certainly not her place to be standing against a brick wall on an almost empty street, silver blood curdling, watching helplessly, as one human mugged another. She was supposed to be useful. Yet here she was, being anything but. If her bosses found out, she would be demoted.

Thank you, Nikki, for the critique! We are showcasing three mentor critiques each day leading up to the Pitch Wars 2021 submission window, so make sure to read the other two critiques for today and come back tomorrow for more.