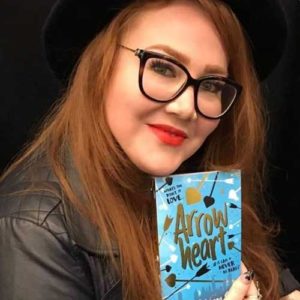 After graduating high-school, Rebecca Sky set out on a five-year, 24 country exploration to find herself. She slept in a hammock in the Amazon Jungle, skinny-dipped off the West African Coast, ate balut and climbed the chocolate hills in the Philippines, and fell in love in Cuba (then again in Brazil, and a final time to a Rocker from Canada).

Rebecca returned home to the West Coast captivated by the world and ready for another adventure. So she did what every wanderer does when standing still—began writing. Her work has since garnered over 20 million reads on Wattpad, and she’s had the opportunity to partner with some really great brands. She was featured in The New York Times and The Boston Globe. Her debut ARROWHEART, book one in THE LOVE CURSE series came out in June 2018 with Hodder Children’s Books a division of Hachette Book Group. The sequel HEARTSTRUCK comes out in 2020! 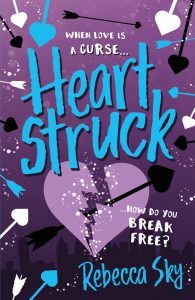 What if you had the power to make any boy fall in love with you? Addictive romance with a fantasy twist for fans of Holly Smale, Ally Carter, and Zoe Sugg.

The gods are gone.
The people have forgotten them.
But sixteen-year-old Rachel Patel can’t forget – the gods control her life, or more specifically, her love life.

Being a Hedoness, one of a strong group of women descended from Greek God Eros, makes true love impossible for Rachel. She wields the power of that magical golden arrow, and with it, the promise to take the will of any boy she kisses. But the last thing Rachel wants is to force someone to love her and in retribution for refusing to use her powers, the Hedoness Committee has taken her captive.

Now, Rachel is being held in a secret facility. As she struggles to find a way to escape, Rachel must figure out who she can trust, rescue her family and friends, and maybe, just maybe…even find a way to fall in love.

Fifteen year old Adam arrives home to find his house swarming with government agents. He quickly discovers that his father was a scientist employed by C.H.E.S.S. (Cryptid Handling and Extranormal Secret Service) a secret government agency specializing in the strange and paranormal. [There’s a lot going on here, I’d cut and combine to make the sentences punchier and feel more active. Also, I don’t find C.H.E.S.S’s name or definition necessary for the query so I’d cut them all together.  Eg: Fifteen-year-old Adam arrives home to find his house swarming with government officials and learns that his scientist father has been working for a secret agency specializing in the strange and paranormal.]  An agent reveals that Adam’s father was caught performing illegal experiments, including genetically modifying Adam’s genes with animal DNA. [Again, I’d cut and combine this and the next sentence, EG: They tell Adam that his father’s been performing illegal experiments on him and has genetically modified Adam’s genes with animal DNA.] Adam is shocked, but before Adam can confront his father about this, he’s told that his father has gone missing, and along with him, Adam’s chance for a cure. [What are his symptoms? If he didn’t know this was being done to him, why would he be so desperate for a cure? If there’s a big consequence, here is the place to put it. EG. “…modified Adam’s genes with animal DNA and that INSERT SOMETHING AWFUL MAYBE IRREVERABLE TO SHOW STAKES LIKE: on his next birthday he will grow a beak and unicorn horn (one can dream) and feathers over his entire body and will no longer be able to communicate verbally if he doesn’t find a cure. INSERT WHAT IS STANDING IN THE WAY OF HIM REACHING THAT GOAL, LIKE: The problem is, his father is the only one who knows how to fix him, and no one knows where his father is, not even him.]

Drafted into C.H.E.S.S., [Why is he drafted into CHESS? IF YOU CUT CHESS as suggested you could replace any mention with “agency” eg: the same agency that’s hunting his father] Adam is partnered with Holly Summers, a no-nonsense teen who was also subject to genetic splicing by a rogue scientist, and was practically raised within the organization. For a reason Adam can’t understand, Holly takes an immediate disliking to him, even as she integrates herself into Adam’s social life in order to keep an eye on him and help maintain his secret. [If she doesn’t like him, what is motivating her to protect him and keep his secret?] The mystery deepens as more agents go missing, with all the evidence pointing to a man long dead. [what mystery? Where his father is? Why Adam and Holly were experimented on?] With hints of a mole within C.H.E.S.S., [why is that bad for Adam? Eg. …a mole within the agency who is determined to keep Adam as his hybrid-animal self] Adam and Holly have to learn to work together if they’re going to uncover the traitor, find Adam’s father, and secure a cure. [great ending line, and it will have a lot more punch if you flesh out the stakes of those points above]

… is a 59,000 word YA (at the younger end) [I would just stick with saying YA and let agent/editor decide where on that spectrum it fits, also 59k is on the low side of word counts for a spec fic] contemporary science fiction adventure novel with series potential, which can best be described as Chuck meets Men in Black, with a dash of Spider-man. [I had to google CHUCK as I’ve never heard of it, also the show stopped airing over 7 years ago, so maybe a more current YA comp would be better here, if you can find a book comp that is typically preferred and would work nicely with the other TV/film ones] There seems to be a recent drought of clean YA books (without language or sexual content) for those young readers just moving into the YA market. [Okay, so “Clean YA” doesn’t need to be defined as most people in the industry know what it means and personally, it’s a term that makes me cringe. It comes across as implying that sexual content is automatically “dirty” and that’s not a healthy message to spread. It’s not necessary to rate your MS, but if you feel the need to include the disclaimer that this is a PG or G rated book, then I would stick to those terms (PG) as they don’t sex shame]. … is intended to fill that niche. [There are quite a few teen books without sex/swearing that have come out recently (my own book fits this descriptor), so I would delete this line all together] As per your instructions, I’ve included the first ____ pages below.

Thank you, Rebecca, for the critique! We are showcasing three mentor critiques each day leading up to the Pitch Wars 2019 submission window, so make sure to read the other two critiques for today and come back tomorrow for more.