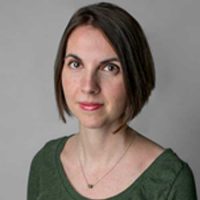 Carrie Callaghan is a historical fiction author living in Maryland with her family. Her debut novel, A Light of Her Own, about 17th century painter Judith Leyster, was published by Amberjack in 2018, and her second, Salt the Snow, is forthcoming in 2020. Her short stories have been published in multiple literary journals around the country, and she is a senior editor with the Washington Independent Review of Books. She loves seasons of all kinds, history, and tea. And books, books, books. 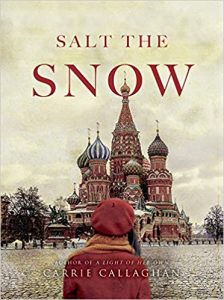 American journalist Milly Bennett has covered murders in San Francisco, fires in Hawaii, and a civil war in China, but 1930s Moscow presents her greatest challenge yet. When her young Russian husband is suddenly arrested by the secret police, Milly tries to get him released. But his arrest reveals both painful secrets about her marriage and hard truths about the Soviet state she has been working to serve. Disillusioned, and pulled toward the front lines of a captivating new conflict, Milly must find a way to do the right thing for her husband, her conscience, and her heart.

[What a fun story! I suggest beginning with your query with the information paragraph you had at the bottom. The ordering of a query is quite subjective, but I think it will help agents realize that what might start off sounding like historical fiction will actually have some magic in it.]

1929: Twenty-year-old Bidisha is a gifted dressmaker adored by her clients, but never at home [the second clause of this sentence is a little confusing. I suggest thinking about how to make it more parallel. Who at home doesn’t adore Bidisha?]. Housebound from acute agoraphobia due to her father’s abandonment, she fosters an altruistic outlook despite her family’s abuse [The second half of this sentence sounds like a lovely character detail, but it’s not necessary for a query. I suggest combining this sentence with the following, so it reads: “Housebound with acute agoraphobia following her father’s abandonment, Bidisha has only Rajput … for solace.]. Only Rajput Prince Shardul, her childhood pen-friend, is her solace. But when his betrothal is announced, Bidisha confronts the cutthroat world to rescue her prince charming from a marriage she believes [suspects?] is forced. She stows away on the airship of a traveling actors’ troupe where she rises to the leading lady’s understudy [This sentence is confusing, particularly the combination of the noun airship and the verb “rises” which refer, I think, to separate situations.]. She must survive the troupe’s inner machinations, without yielding her values [It’s not clear what her values are, so I suggest cutting this mention. Instead maybe indicate what challenges her agoraphobia poses?], to perform before her prince and charm him away from his betrothal.

1949: Decades have passed since Bidisha vanished from Prince Shardul’s life, but never from his heart. His twenty-years search has cost him his golden child status, demoting him to the prodigal son [Instead of the highlighted, how about instead: “his once close relationship with his parents.” Or something more straightforward than the metaphorical language used above.]. Plagued by an uncanny [I don’t think you need the word “uncanny”] teleportation power he cannot control, he returns home, hoping to reconcile with his estranged siblings. But his presence unearths the family’s many skeletons. Before his sister can oust him, he vanishes. Months pass by and he remains missing, guilting his sister into tracking down his diaries scattered across the subcontinent, places he visited searching for Bidisha. What his sister finds retracing his steps take her back to the night Bidisha went missing, and what led his ladylove to vanish might hold the key to his disappearance as well. [This paragraph feels complicated, particularly in comparison to the previous paragraph, which set up the situation and stakes nicely. Can you simplify this? “Twenty years later, Prince Shardul is still searching for Bidisha, at the expense of his once-close relationship with his family. His search is hampered by the teleportation powers he cannot control and the dangerous family secrets he unearths.”]

TITLE is a 100,000-word epistolary fabulist historical depicting Bidisha and Shardul’s story through the eyes of the people they left behind, as well as their own.[Because some agents might be nervous about so many POVs, you could leave this part out and let your writing speak for itself. That said, I can understand why you’d include it, so it’s a judgment call. Separately, is the novel entirely/partially/mostly epistolary? Since the sample below was not, it might confuse readers expecting to see a letter. Maybe say “mostly epistolary?” Finally, perhaps also specify if it’s adult fiction or young adult fiction.] Set in an Indian subcontinent never been colonized by Europe, it’s a CINDERELLA reimagining partially told in reverse chronology. [This sounds very creative and fascinating! I see on Twitter you mentioned friends-to-lovers; that might be a fun aspect to mention.]

I’m an MA graduate of English literature from Dhaka University and a book blogger based in Bangladesh. [You might also want to consider noting that you have worked with a sensitivity reader for agoraphobia, or that you intend to.]

Thank you for your time.

After searching for hours, her mother found her by the banks of Buriganga. [This sentence feels like it might be hopping into the mother’s point of view.] Legs sprawled. Arms droopy. Dark eyes blank as clean slates. Hair, previously plaited with white ribbons, now unkempt and flowing in the wind. Her face betrayed nothing. No terror. No tears. Her eyes stared at the darkness ahead. No accusations they cast at it.

Her mother took in her clothes. Torn, muddied. Such wasn’t the state when she’d left hours ago for the Baishakhi fair with her father. [It feels here like we’ve popped into her mother’s head for a moment, but I don’t think that’s what you intend. Maybe describe how, from Bidisha’s perspective, what it looks like as her mother takes in her clothes?] Her frock was pristine, her pajamas spotless. Her shoes, now worn, were brand new. Today was Pahela Baishakh. Of course she could go out in her new clothes. Didn’t her mother buy them so she could parade before her friends how pretty she looked? She went to play in the courtyard, before the voices floated out. Her parents were… fighting. Again.  [The transition from the riverbank to the courtyard is a little confusing. Can you show how her mother brings her back? If that’s what happened.] The neighbors didn’t slow down to listen and gossip. Some rolled their eyes. Most ignored, as did Bidisha. Spinning tops were more fun. [Aww, poor Bidisha! I like the glimpse of childishness here.]

Just as her top was the last one spinning, she spotted her father trudging toward the tenement gate. Where was he going? Unlike other fathers, he rarely stepped out. Poets need not travel, he’d say, the universe resided in their minds.

His foot hovered over the threshold before he stepped back in. He smiled sadly. “Would you like to go with me?”

She nodded. [I like how you are letting your adult readers know, with his hesitation and his sad smile, that something is wrong, yet Bidisha doesn’t seem to. Hopefully she’ll pick up on it soon though. Poor thing! Though I imagine she will come into her own.]

I love the premise of this story! It sounds like it will be a very fun read. Good luck!!

Thank you, Carrie, for the critique! We are showcasing three mentor critiques each day leading up to the Pitch Wars 2021 submission window, so make sure to read the other two critiques for today and come back tomorrow for more.