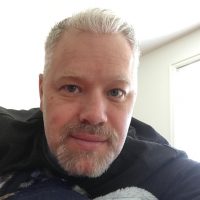 Always a storyteller, Jamie discovered that novel writing was the best way to nourish his creative energy and keep him out of trouble. He started by dabbling with fantasy, but found his passion after writing his first young adult mystery, a book that introduced him to the awesomeness that is Pitch Wars. When he’s not reading, working, or tormenting teens on a page, Jamie can be found playing with his kids and two dogs while obsessing over British baking shows.

TITLE is a 66,550 word Young Adult novel and a combination of Wintergirls and Girl Made of Stars. [Great use of the comp titles here. We immediately get a sense of what this book is about.]

An emotional fifteen year old girl is left broken when her boyfriend rapidly advances their sexual relationship, now her dark thoughts and bad habits are trying to convince her she’s too damaged to go on. [This is your chance to grab the agent’s attention, so a powerful hook is key. I suggest naming Scarlett right at the beginning then sharing her goal along with what’s keeping her from that goal. An example could be: Scarlett Andrews wants (put her goal here) but when her boyfriend takes their sexual relationship too far (list the compelling roadblocks here).]

In a suburb in Michigan, everything changes on that cold day after school for a fifteen year old Scarlett Andrews. She knows she didn’t technically consent, but it was with Jude, her boyfriend and he says he loves her. She wants to believe him, so why does everything feel so wrong? Now every time they’re together, her body shuts down and her mind goes to a dark place full of negative thoughts and self-loathing. [The first half of this paragraph is heart wrenching and gives a sense of Scarlett’s pain. Combined with the excellent comps already mentioned, we understand where this story is going. Well done.] She has to make the decision to stay with Jude and pretend everything is fine or leave him and call him out for what he did to her. But after her friends lie and stab her in the back at the Homecoming dance, Jude’s the only one there to comfort her. She decides to play the role of a loving girlfriend so her boyfriend won’t abandon her too. When he blindsides her and ends their relationship [This part of the paragraph wasn’t as clear as the beginning. You’ve set this up as her wanting to keep things the same, but then her boyfriend dumps her so it’s now unclear what Scarlett’s motivations are. If the story is about her conquering her pain and moving on despite what’s happened, I suggest focusing on that.] Scarlett’s left with a family that degrades her, friends that betray her, and dark thoughts whose destructive habits of self-harm are getting harder to hide. [This final sentence pulled at my heart. Not only am I worried about this character, I care about her—and this is the query! If you can get an agent to care about your character at this point in the query, you’ve done your job well.]

Now single [Is single a bad thing in high school? I suggest beginning this paragraph at ‘weary’ and possibly changing it to a stronger word.] and weary of letting people get too close, Scarlett tries to act like she’s confident and happy, when deep down she’s in mental and emotional turmoil. She clings to what makes her feel normal; a new group of friends, a passion for music, and a crush on her friend’s older brother. [This is powerful. You’re sharing the theme of the book without stating it outright. It’s a great way to pull all of the previous elements of the query together.] Her new social life helps her mend her broken heart but the scars run too deep to heal completely. [At this point, you’re pulling on the hook and convincing the agent to read the included pages. This last line is almost as critical as the first so using it to create questions is a good way to finish. (Note that you don’t want to ask a rhetorical question here, but instead leave them wondering/worried about what could happen to the main character should she fail. I suggest reworking this line to gain that effect.]

TITLE shows how trauma’s not linear. I have an English Degree from Michigan State University and I’m a Licensed Professional Counselor. I work with teens everyday that have felt like there’s no one to turn to and are forced to make adult decisions with their teenage mentality. [This bio is great and adds to the query since your story deals with a heavy subject.]

I can feel the rug burn on my back from me trying to break free from the force of his grip. You can’t give up now, if he senses that you’re tired then it’s over. [After reading the query and then this beginning, I was worried the book began with an assault because that would have been triggering for me. Thankfully, it’s not that, though it’s something you’ll want to consider as you revise.] I squeeze my eyes shut and will my arms to give me strength to push him off of me. I dig my heels into the carpet trying to muster all the power possible. [Each line in this first paragraph starts with the word ‘I’ so it feels repetitive. My suggestions is to mix up the sentence structures to add variety. It’s tricky to do when writing first person present, but I believe you’ll find the narrative flows better if you can mix it up.]

“No!” I shout breathlessly.

“C’mon Scarlett, it’s over. I have you pinned there’s no way you’re coming back from this.”

“It’s not over until I say so,” I struggle underneath him. I can tell he’s trying to hold back laughter so I let my body go limp.

“You know you don’t have to win at everything,” he reassures me, letting go of my arm to move a piece of hair out of my face.

“Then apparently you don’t know me at all,” I smirk, taking my free arm to grab his hand, giving myself just enough force to flip him on his side so I can crawl out from underneath him and climb on top.

“Seriously? You gave up.”

“I don’t recall saying that, you just let your guard down. You’re taller and stronger than me, I have to use a different set of skills to my advantage,” I shrug.

“I’ll let it pass, this time, but only because I don’t mind you on top of me.”

[This is an excellent example of how the first pages can hook someone more than the query. This first page grabs my attention and makes me feel for Scarlett. I’m worried about her and want to know that things will turn out okay. Here’s how the page did that: First, there’s an immediate sense of dread at the beginning because I know what the story is about based on the query; the tension begins right here. Second, there’s a sense of theme on the page that’s mentioned a couple of times. Those words make me believe, as a reader, that despite all the bad things that are going to happen, Scarlett’s going to overcome those. “It’s not over until I say so,” and “You know you don’t have to win at everything,” he reassures me, letting go of my arm to move a piece of hair out of my face. “Then you don’t know me at all,” feel like promises to me. Despite the heavy content this story deals with, it’s that hint of hope in those words that keeps me reading.

That noted, since the boyfriend’s name wasn’t listed in the query, I’m unsure if Jude is a good guy or the bad guy—and that create some worry for me as a reader. I believe that naming the villain in this case sets a clear expectation about what’s coming so the reader can make a decision if they want to continue.

This was well done. Thank you for sharing your work and putting yourself out there for critique.]

Thank you, Jamie, for the critique! We are showcasing three mentor critiques each day leading up to the Pitch Wars 2021 submission window, so make sure to read the other two critiques for today and come back tomorrow for more.