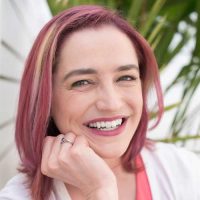 Rebecca Enzor is a fantasy author and analytical chemist in Charleston, SC, where she lives with her husband, two dogs, three cats, and sometimes chickens. Her articles on writing science in science fiction can be found in “Putting the Science in Fiction” from Writer’s Digest Books. Obsessed with everything ocean, she studied fisheries biology in college and electrocuted herself collecting fish in a river, which inspired several key scenes in her debut novel. Speak the Ocean, a Blackfish meets The Little Mermaid retelling, was published by Reuts in July 2019. She’s represented by Eric Smith of P.S. Literary. 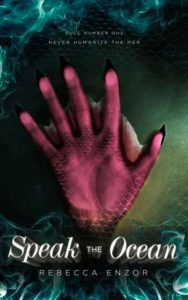 For Mer handler Finn Jarvis, the feral mermaid performers at Oceanica Marine Park are nothing more than ruthless aquatic predators, violent and unpredictable. That doesn’t stop the public from flocking to one of the world’s most popular tourist attractions. To them, the Mer are magical entertainment, too beautiful to be dangerous. They don’t see what happens to the ones who dare swim out of line. Newly caught Erie doesn’t know what the evil landfolk want from her. Alone and voiceless, she watches the other merfolk from the confines of her tank. Broken into submission, they’ve become shells of the once vibrant creatures she knew. But Erie refuses to be subjugated. She’ll get the crowds to see her as something more than simple entertainment—starting with her captor, Finn.While Finn trains Erie in her routine, she secretly teaches herself the air-words he and the other trainers speak. And when the language barrier falls, Finn starts to realize that the gap between human and Mer is smaller than he thought, and maybe it’s not the Mer who are monsters, after all.Set against the backdrop of a familiar and beloved fairy tale, this stunning debut, as brutal as it is beautiful, explores the morality of subjugating other species to the whims of entertainment, daring readers to find humanity in the inhuman.

And They Called Her Stormbringer Chapter 1

“It is the Law.” [I thought this was Llani speaking at first. Clarify that it’s the High Priest. In fact, beginning with dialogue can be really confusing in general, so I’d try not to. You can make the second line the first and fix both issues at the same time] Llani stared into the cold[,] unforgiving face of the high priest, searching for the smallest allowance of mercy. “There can be no exceptions,” said the High Priest of Jordaine, Isak Tornin.

A familiar bright note of pain rose behind Llani’s eyes, hot and heady, as a rage came upon her, filling her up like flood waters. It was the touch of power that was vision and prophesy and something more. It filled her throat till it threatened to spill out of her mouth [at the cold words of dismissal – I would delete this, because the rest of the sentence is really good]. Llani swallowed down the urge to speak the tidings of the goddess before all and sundry of the Temple Council of Jordaine [awkward – you can take out the “all and sundry” to make it read smoother]. She had not spent years building this careful mask to drop it when she most needed to seem beyond reproach, a voice of reason.

After a pause she hoped looked like she was only gathering her words, Llani succeeded in mastering the rage that was not hers and said, “Respectfully, High Priest Tornin, are we not the body that decides temple law? What is the point of laws that do not serve the interests of our community? [applause.gif] I have Seen it. Sennia’s daughter will be gifted. An exception must be made. She is the best successor to my station as Vessel of Jordaine [Jordaine is the Goddess? The one that was just enraged?] that either of us will see in our lifetimes.”

“Our laws keep us on the proper path. We do not ignore or change the dictates of the Goddess when it pleases us. This discussion is a waste of our time and risks opening the flood gates to a dangerous precedence for further requests for lenience when there is no good cause,” the high priest responded blunt as a hammer.

Llani saw red. It was similar to the hot strain of staring up at the high desert sun, eyes tight closed. The implacable fire that was the Goddess Jordaine’s hand was upon her, and in the grip of the divine she wanted only to yield, but with stamina born of painful experience Llani forced it down. She would not risk Sennia’s daughter by inciting the high priest’s wrath with too blunt a reminder of her “gifts”. He had no liking for her or her gifts for all that she had spent years lying through her teeth that her only ability was foresight. A stronger Gift of Sight then had been seen in some time, but still only that, only a gift. Nothing like the kind of ritual magic he and his most favored priests could wield, and certainly no threat to the proper way of things. [Double spaced, this is the end of the first page, and that’s a really good line to end the first page on – lots of tension and gives a clear picture of what she’s up against and why]

“Surely this would not be so terrible a thing,” Llani entreated[.], “Many of the temple-born children who are sent to foster elsewhere become respected members of other holy orders. I have checked our records. Six out of ten fostered temple[-]born children will present with a temple-valued gift at some point in their lives. None of the other temples of the Five Gods require physical perfection in children to be raised within the temple. A cross examination of temple regulations pertaining to the rearing of temple [that is a lot of “temple” in a short amount of time. Delete any that you can] children in each of the orders of the Five Gods show that this particular law is merely an ingrained tradition of the Jordainic Order that bears review, in light of our current knowledge.”

Llani laid out her argument, like irrigation ditches in a field, methodically, so that every part of the field would receive adequate water.[This is a great line!] Everyone in her audience, no matter their personal motivation, would find something they could sympathize with.

She had not slept since Sennia had gone into labor, at dusk two nights before. She was no longer capable of concealing the strain. There was one painful muscle spasm in her left calf that had started up at dawn today. She was currently balanced on one foot so the tremor didn’t make her shake like a leaf. She wanted to sleep for days. But, if she did not push this now, it would be too late. Honor demanded that she stand for Sennia now. What was the point of a law that hurt the weakest among them the most?

[The reader could really use more grounding in the beginning. While dialogue does give some of the needed information, it’s not immediately clear what’s happening and why it matters. In fact, I’d move that last paragraph up so that we know more about the characters and are given a reason to care about them – specifically Llani, Sennia, and her baby – right from the beginning. Otherwise all we know is that a woman is arguing with a priest, but we don’t know why it matters or why we should care that they’re arguing.

Also this reads as adult, not NA, and you’ll have a better chance getting it published as adult, because only small presses publish NA SFF. I know because I tried 😉 ]

Thank you, Rebecca, for the critique! We are showcasing three mentor critiques each day leading up to the Pitch Wars 2019 submission window, so make sure to read the other two critiques for today and come back tomorrow for more.