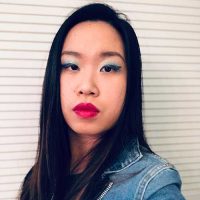 Gladys Qin gets through life by cracking one dad joke at a time. Although she can’t tell dogs apart, she is a meticulous editor with a MA in Creative Writing, Publishing, and Editing under her belt.

As a kid, she loved to redirect movies to star her own family members. (She was the main character, of course.) She also wanted to be a business wizard who’d bring her favourite Chinese fast food chain to Australia. Then she wanted to be a rockstar, and then a mechatronics engineer. Long story short, she traded robots for books but still attempts to invent fictional tech in her spare time.

Gladys still wishes she could be all of those at once, but for the moment, she’s attempting to go around the publishing machine while working in finance. In 2018–2019, she was the production editor for local print publications, Grattan Street Press and Antithesis Journal, managing the process of putting Inside Story: The First Ten Years and Antithesis Vol. 29: Devotion out into the world.

After an immersive internship at a literary agency and a stint as a Pitch Wars mentor that got her mentee 25 agent requests, 3 offers, and subsequent representation, Gladys decided to use her platform to give free industry advice. She is now a freelance editor, shaped by Tessera Editorial’s mentorship program.

Never one to stop, Gladys is looking forward to the first step to world domination— She means… growing within the publishing industry. Her goal is to support diverse talent and ideas beyond the limitations of genre, as well as lift books that make people think long after the story is over.

[A lot of this reads more like a synopsis than a query letter. I would remove much of the detail to move the pace and intrigue along. (The part about your manuscript should only be around 250 words, and you should also include a bit about yourself at the end.) I will point out the parts that feel essential to me, but you would know your story better so tweak accordingly.]

Nikko, an apprentice healer with the ability to travel out-of-body, is different looking from others. She longs to learn magic to change her appearance. [Essential info up to here—maybe also include something about the setting and what the characters are dealing with within it?] After a blind wisewoman gives Nikko a prophecy about dragons waking, and she survives an assault, Nikko witnesses the theft of rare, luminous cloth. The fires the thief sets as a distraction kill many, including Nikko’s beloved mistress, and the matriarch of the clan that owned the cloth. Fearing the thief will return and kill the only witness to the theft, Beolach, son of the murdered matriarch and now clan head, abducts Nikko to protect her from the thief, an elite mercenary of his own race who belongs to a cult dedicated to the return of their long-lost empire—and dragons. [I’d condense this bit to something like this: After hearing a prophecy about dragons waking (but phrase this more intriguingly?), she witnesses the theft of a rare, luminous cloth. The only surviving witness to the crime, Nikko is abducted for her own safety by an elite mercenary in a cult dedicated to the return of their long-lost empire—and dragons.]

Different factions, so at odds with one another they ignore the warnings their world is on the verge of destruction, each want Nikko for their own purposes. [I’m unsure about the placement of this information. Do they find out about Nikko after her abduction? Is this a problem parallel to hiding from the thief?] The Sisters, whose female ancestors once ruled the land, believe Nikko their long-prophesied savior. For that reason, the high priest of the dominant religion just wants her dead. The dragon cult’s high priestess who experiences Nikko’s raw talent wants her as an apprentice, and Beolach as her disciple. So does the Great Lord’s Favorite, the sorceress Meretrix, who wants to use Nikko to restore women to their former status. The Great Lord, too, desires Nikko while son both desires and hates her as he descends into madness.

Amid the intrigue, Nikko and Beolach fall in love but Beolach must hide his feelings for her from the jealous, nascent dragon within him that gives him strength but devours his emotions. If Nikko and Beolach can survive, it’s up to them to save their world. To succeed, they must bring Beolach’s dragon, who hates Nikko, into it.

[See if this ultra-condensing works: As multiple factions fight over Nikko to control her prophesized fate (to wake the dragons? It would help to clarify above), the world is on the verge of destruction. But to save the outside world, they must look within—at the jealous, nascent dragon within Beolach.]

With elements of fantasy, adventure, and a dash of romance, TITLE, a high fantasy, is a completed manuscript with 170,000 words. [Not an edit, but 170k is too long for traditional publishing and would result in an auto-reject. I suggest finding a way to split this manuscript into a duology.]

[Include a short author bio here.]

Something slithered up Nikko’s leg. Her eyes popped opened [/open].

Nikko flicked the creeper away and blew a sigh. This was the third night the old healer had made her climb into the abandoned well for the same exercise. Each time[,] Nikko had failed and received less to eat. With hunger gnawing her insides, she was determined to pass Calag’s test this time.

Below, Calag sat on the chopping stump by their wattle and daub hut. The red moonlight had turned her silver braids and riverflax tunic pink. Her mistress pulled her clay pipe from her mouth, tilted her face to the sky[,] and gave a long-toothed smile. Beyond her, the woods and night creatures beckoned to Nikko.

The forest enveloped Nikko like the warm waters of the Teo-awin River. She found a wolf pack stalking a young buck separated from his herd. The frightened deer panicked and leaped across bramble and thicket, Nikko and the pack behind him.

Any position in their ranks was hers to claim. At the fore with the dominant female and her mate, or the rear amid the flurry of leaves and twigs kicked up by their paws. The place she craved most, however, was the middle, in the stream of pumping blood and rippling muscle. There, she joined them. [It’s a bit hard to tell if she’s there as a floating spirit or inhabiting one of the animals, so maybe make that clearer.]

The buck fell on the banks of the Teo-awin amid a blur of snapping jaws and gray-striped fur. Nikko deafened herself to the pitiful bleats and abandoned the snarling pack. She skimmed across the northward-flowing river and threaded the tannin-stained waters like a needle. Beneath the surface, she raced an otter in pursuit of fish, his sleek fur gleaming in shafts of moonlight. [The descriptions are really good, especially when the colours make everything seem magical in the night!] When she tired of this, she shot skyward without a ripple to soar above the river.

She rose until the forest and fields stretched below her. Dark hollows along the river and wetlands marked places where people had carved out towns and settlements. A nighthawk darted past her. Back in the well, Nikko’s body twitched in response.

She climbed, slowly first, and as her confidence grew, faster.

Tonight, I will touch the face of the moon.

The sky disappeared as countless clawed wings surrounded her. She had blundered into a colony of bats. They flew around and through her, shattering her concentration. Nikko tumbled.

She searched for an anchor, some marker to show her the way back to herself. Clouds had swallowed the moon and Rennag Cro-derg [What does this mean?], and in the darkness, land and water were one.

Calag’s voice snapped Nikko into her body with such force she banged her head against the bricks.

Calag [Use something like “the old healer” so it doesn’t feel so repetitive.] stuck her head over the well shaft. “What happened?”

Nikko licked beads of perspiration from her upper lip. “I got a little higher. I’ll make it next time….”

[The atmosphere is great in this excerpt. The descriptions of the whole experience make the scene have a delicate and magical feel to it. Despite the heaviness of the descriptions, the way things are worded makes the information flow well and take less effort to digest. Like I said before, I really like the incorporation of colours when describing the setting. There were just a few issues with commas that I pointed out, as well as parts where it could be clearer. Overall, looking good!]

Thank you, Gladys, for the critique! We are showcasing three mentor critiques each day leading up to the Pitch Wars 2020 submission window, so make sure to read the other two critiques for today and come back tomorrow for more.